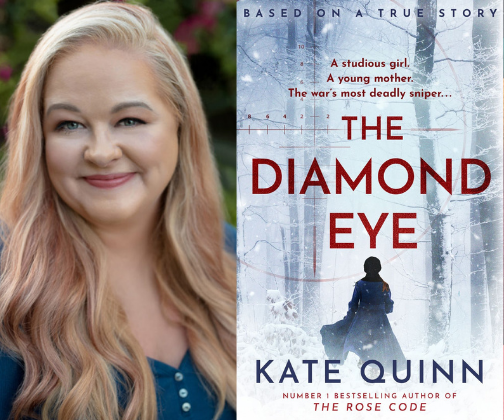 When I wrote THE DIAMOND EYE, I had no idea the Russian invasion of Ukraine would crash into international headlines a matter of weeks before the book released, throwing the novel’s history into a stark spotlight. The history between Russia and Ukraine is long, bloody, and painful, and is only becoming more so. I have been asked why I wrote a book where the two nations exist under the same national umbrella, and whose heroine (real life World War II sniper Lyudmila Pavlichenko) is apparently Ukrainian-born but pro-Russia.

During World War II, Ukraine was–unwillingly and unhappily–part of the Soviet Union, existing under the umbrella of Stalin’s USSR. I wrote THE DIAMOND EYE based on Lyudmila Pavlichenko’s memoirs, in which she uses Russian place names and states clearly that she considered herself Russian/Soviet. She was born in Ukraine but her father was Russian–his name was Belov, her maiden name Belova; Pavlichenko was her married name. Her father was both NKVD and a staunch follower, and appears to have raised her in the same way: she lived in Moscow in her later life, with apparent contentment, and never fell out of favor in the communist regime. The matter of where her loyalties truly lay, between the horrors of starvation and oppression her homeland suffered and the beliefs taught to her by the state and her father, is fraught, and I tried very hard to in THE DIAMOND EYE to show that her memoirs did not tell the whole truth. Lyudmila was a self-described city girl, and may have been ignorant of the purges and famines that racked the Ukrainian countryside–even today we are seeing in the news how much the Russian propaganda machine conceals from its own people; the grip on information unflattering to Stalin’s regime was even stronger during her lifetime.

However, even if Lyudmila believed in Stalin’s regime, it cannot be denied that she was Ukrainian-born and that all her fighting was done on Ukrainian soil in defense of Ukrainian civilians. I consider her a Ukrainian national heroine, not a Russian national heroine, and I have rejoiced to see how much modern-day Ukraine has claimed her as their own. Her fight against Hitler was not fundamentally political; it was simple self-defense–the efforts of one woman to help repel the brutal invasion of her homeland, and that is the struggle I have depicted in THE DIAMOND EYE. There is not a doubt in my mind that if she lived today, she would still be fighting to defend Ukraine, and for the same reasons: to stop the invasion of her home.

This book was completed long before the current war began. I wish I’d had a chance to write it afterward, when I could highlight even more strongly the courage and heroism of the Ukrainian people, and the suffering they endured at Russian hands. I support Ukraine, always, and will continue to do so.

ABOUT THE DIAMOND EYE:

In 1937 in the snowbound city of Kiev (now known as Kyiv), wry and bookish history student Mila Pavlichenko organizes her life around her library job and her young son—but Hitler’s invasion of Ukraine and Russia sends her on a different path. Given a rifle and sent to join the fight, Mila must forge herself from studious girl to deadly sniper—a lethal hunter of Nazis known as Lady Death. When news of her three hundredth kill makes her a national heroine, Mila finds herself torn from the bloody battlefields of the eastern front and sent to America on a goodwill tour.

Still reeling from war wounds and devastated by loss, Mila finds herself isolated and lonely in the glittering world of Washington, DC—until an unexpected friendship with First Lady Eleanor Roosevelt and an even more unexpected connection with a silent fellow sniper offer the possibility of happiness. But when an old enemy from Mila’s past joins forces with a deadly new foe lurking in the shadows, Lady Death finds herself battling her own demons and enemy bullets in the deadliest duel of her life.

Based on a true story, The Diamond Eye is a haunting novel of heroism born of desperation, of a mother who became a soldier, of a woman who found her place in the world and changed the course of history forever.

Kate Quinn is the New York Times and USA Today bestselling author of historical fiction. A native of southern California, she attended Boston University where she earned a Bachelor’s and Master’s degree in Classical Voice. She has written four novels in the Empress of Rome Saga, and two books in the Italian Renaissance, before turning to the 20th century with “The Alice Network”, “The Huntress,” “The Rose Code,” and “The Diamond Eye.” All have been translated into multiple languages. Kate and her husband now live in San Diego with three rescue dogs.

Author visits with Kate Quinn are available to book clubs via NovelNetwork.com.