The Woman Before Wallis by Bryn Turnbull 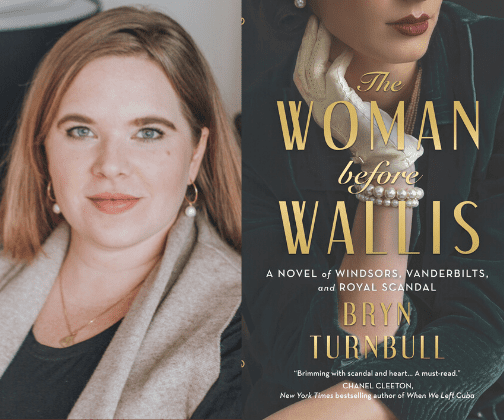 For fans of The Paris Wife and The Crown, this stunning novel tells the true story of the American divorcée who captured Prince Edward’s heart before he abdicated his throne for Wallis Simpson.

In the summer of 1926, when Thelma Morgan marries Viscount Duke Furness after a whirlwind romance, she’s immersed in a gilded world of extraordinary wealth and privilege. For Thelma, the daughter of an American diplomat, her new life as a member of the British aristocracy is like a fairy tale—even more so when her husband introduces her to Edward, Prince of Wales.

In a twist of fate, her marriage to Duke leads her to fall headlong into a love affair with Edward. But happiness is fleeting, and their love is threatened when Thelma’s sister, Gloria Morgan Vanderbilt, becomes embroiled in a scandal with far-reaching implications. As Thelma sails to New York to support Gloria, she leaves Edward in the hands of her trusted friend Wallis, never imagining the consequences that will follow.

Bryn Turnbull takes readers from the raucous glamour of the Paris Ritz and the French Riviera to the quiet, private corners of St. James’s Palace in this sweeping story of love, loyalty and betrayal.

“In her debut, [Turnbull] skillfully balances the drama with an intimate portrayal of Thelma’s search for love and happiness both within her marriage and beyond it. Fans of Netflix’s The Crown will delight in this well-researched tale of high society scandal involving a little-known woman whose story is begging to be heard.” —Booklist

“Vividly transports readers to 1930s British upper-crust society . . . picture perfect . . . This sweeping, stellar tale will delight all kinds of readers, but especially those who enjoy learning about people lost to the passage of time.” —BookReporter

“Real-life socialites . . . glimpses into an exclusive world . . . I recommend this juicy read about the scandals and lives of the rich, famous, and royal.” —Historical Novel Society

“Brimming with scandal and an equal amount of heart . . . a sweeping yet intimate look at the lives of some of history’s most notorious figures from Vanderbilts to the Prince of Wales . . . A must-read for historical fiction lovers.” —Chanel Cleeton, New York Times bestselling author of When We Left Cuba and Next Year in Havana

“Bryn Turnbull takes a story we think we know and turns it on its head, with captivating results. At its heart is Thelma Furness, the woman supplanted in Edward VIII’s affections by Wallis Simpson, but here she’s more than a footnote to history—she is the story. This is a beautifully written, meticulously researched and altogether memorable debut work of historical fiction.” —Jennifer Robson, USA TODAY bestselling author of The Gown

“What an exciting look into the scandalous, fabulous lives of the Morgan sisters. And Wallis Simpson up close and personal—what could be more wonderful or more wicked?  I loved this book.” —Karen Harper, New York Times bestselling author of The Queen’s Secret

“Juicier than trading gossip at the Ritz, The Woman Before Wallis spills the secrets of the woman who captivated King Edward before he was the king who gave up his crown. This is a glamorous story of just how far we’re willing to go for love. Fabulous!” —Stephanie Thornton, author of American Princess

“This stunning debut is certain to makes Bryn Turnbull a rising star in historical fiction. The Woman Before Wallis is an illuminating novel about Thelma Morgan Furness’s love affair with Prince Edward, her bond with her twin sister, and the sensationalized custody battle over her niece, Gloria Vanderbilt. Filled with saucy scandals, rich historical detail and lyrical prose, you will not be able to put this one down.” —Renee Rosen, author of Park Avenue Summer

“Thelma Furness is brought to glorious life . . . Readers will delight in Turnbull’s masterful weaving of high society, royal shenanigans, and family scandal as they rediscover one of the twentieth century’s most fascinating women. I look forward to reading more from this dazzling new author.” —Alix Rickloff, author of The Way to London

“A captivating, intimate story about the joys and heartaches of the woman who stole a prince’s heart . . . and then lost him to Wallis Simpson. Full of exquisite detail and atmosphere, it takes readers deep into the heart of glamorous New York and European society in the early 20th century. The story is breathtakingly rich and full of complex characters. Settle into a comfortable chair and get ready for a great read!” —Jeanne Mackin, author of The Beautiful American

“An immersive story of love, loyalty, glamour and scandal. Readers will be fascinated by this tale of American socialites and British royalty, and the intrigue behind their glittering façade.” —Kristin Beck, author of Resistance

Author visits with Bryn Turnbull are available via NovelNetwork.com.