The Seventh Queen by Greta Kelly 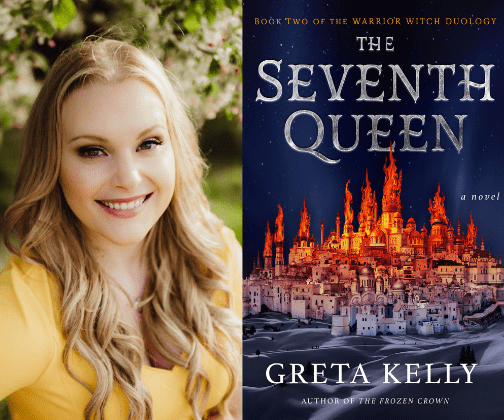 After the gasp-inducing cliffhanger ending of The Frozen Crown, the exciting conclusion to the epic story of Askia—a warrior, witch, and queen-to-be—as she confronts the monster that stole her throne…and is holding her prisoner to steal her magic.

The Empire of Vishir has lost its ruler, and the fight to save Seravesh from the Roven Empire is looking bleak. Moreover, Askia has been captured by power-hungry Emperor Radovan, who plans on making her his wife simply so he can take her magic as his own, killing her in the process. Aware of his ex-wives’ fates, Askia must find a means of avoiding this doom, not only for the sake of Seravesh, but now for Vishir as well. She must put both nations first and remember Ozura’s advice: you must play the game in order to survive. Askia was born a soldier, but now it’s time to become a spy.

But it’s hard to play a game where the only person who knows the rules wants to kill her.

And time is a factor. The jewel Radovan has put around her neck will pull her power from her in thirty days. Worse, Vishir might not even have that long, as the two heirs to the throne are on the verge of civil war. Without any hope for help from the south, without any access to her magic, alone in a hostile land, Askia is no closer to freeing her people than she was when she fled to Vishir. In the clutches of a madman, the only thing she’s close to is death.

Yet she’d trade her life for a chance to save Seravesh. The problem: she may not have that choice.

“Kelly’s plotlines fit together like an intricate puzzle, and the hints of romance and in-your-face betrayals keep the pages turning…A satisfying conclusion that showcases intriguing characters, epic worldbuilding, and all the political and personal scheming a reader could want.”— Library Journal

“The satisfying conclusion to the story launched in The Frozen Crown features incisive prose, along with a plot that continues to defy fantasy tropes.” — BookPage

“Filled with magic, war, and intrigue, this thrilling high fantasy questions how much a ruler should be willing to sacrifice for the sake of duty. Vivid worldbuilding, high stakes, and just a hint of romance propel the twisty plot to a cliffhanger finale. Readers will be on the edges of their seats as they await the next installment.” — Publishers Weekly (starred review) on The Frozen Crown

“Kelly’s debut is a vivid epic fantasy of high political and personal stakes. Fans of Jennifer Estep’s Crown of Shards series will find much to love in the first of a duology.”  — Library Journal (starred review) (Debut of the Month, Jan 2021) on The Frozen Crown

“Packed with deadly intrigue, fierce and powerful women, and high stakes, Greta Kelly’s fantasy-adventure debut, The Frozen Crown, is an exciting and intricate series opener … Fans of Sarah J. Maas and Mary E. Pearson should make sure to snap it up.” — Shelf Awareness