The Natural Selection by Ona Russell 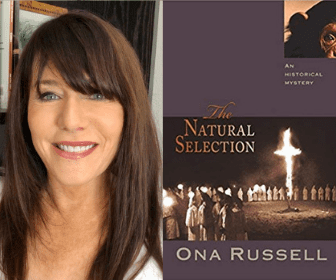 In July of 1925, Sarah Kaufman is finally taking the holiday she deserves. Her court duties in the hands of a competent replacement, she looks forward to a month of relaxation with her cousin Lena, the newest and most progressive member of the English department at Tennessee’s Edenville College. Knowing that the South would be even more humid than Toledo, Sarah packed only her lightest clothing. What she did not know, however, was that she also would need the investigative skills she had just barely acquired, the lover she had continuously resisted, and the emotional strength that she thought had been tested enough for one lifetime. Indeed, even before one of hottest summers on record has a chance to make her rethink her vacation plans, Sarah reluctantly agrees to help investigate the mysterious death of one of Lena’s most esteemed and, as she discovers, enigmatic colleagues. With the dead professor’s own cryptic, Darwinian message as a guide, Sarah travels the short distance to Dayton, Tennessee, where the internationally followed Scopes ‘Monkey’ trial is underway. There, along with the disquieting Mitchell Dobrinkski reporting on the event for the Blade, she meets the famous journalist H. L. Mencken, who provides her with information that could help unravel the mystery. But the case, and the challenges to Sarah’s physical and psychological well-being, have only just begun. What follows is a harrowing and complex path of dead-ends, bigotry and brutality, a journey that shatters her own preconceptions, takes her to the depths of her own desire, and ultimately leads her back to the college where Darwin’s controversial theory of evolution startlingly resurfaces in a manner she never could have predicted. Set against the backdrop of what was deemed the ‘Trial of the Century,’ this socially and politically relevant blend of fact and fiction includes actual courtroom excerpts and vividly portrays the Scopes trial’s central figures: John Scopes, William Jennings Bryan, Clarence Darrow, and especially H. L. Mencken.

“A story about one of the most fascinating trials of history and told with a sympathy and a remarkable eye and ear for the time. The research is superb.”–Anne Perry, award-winning, bestselling author of the Thomas and Charlotte Pitt and William Monk mysteries

“In The Natural Selection, the second in a series of Sarah Kaufman historical mysteries, Ona Russell deftly weaves a fictitious tale of murder and intrigue with the factual Scopes ‘Monkey’ trial, called the Trial of the Century. Set authentically in Tennessee in the 1920s, the plot follows Sarah, a believable and appealing protagonist, as she interacts seamlessly with the story’s characters as well as real participants from the trial, notably celebrated journalist H.L. Mencken. Russell crafts a vinegar divide between science and fundamentalism, reason and racism, change and convention, and intelligence and insecurity. The fast flowing, elegant writing will hook readers; but the book is all the more fascinating, if not distressing, because it strikes close to today’s social and political climate. The controversy and relevance of The Natural Selection will draw them into the time period and keep them turning pages until the end.”–Philadelphia Stories Magazine

The Natural Selection is available for purchase here.

Author visits with Ona Russell are available via NovelNetwork.com.