The Memory Painter by Gwendolyn Womack 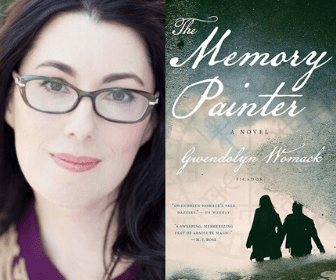 TWO LOVERS WHO HAVE TRAVELED ACROSS TIME. A TEAM OF SCIENTISTS AT THE CUTTING EDGE OF MEMORY RESEARCH. A MIRACLE DRUG THAT UNLOCKS AN ANCIENT MYSTERY.

Bryan Pierce is an internationally famous artist whose paintings have dazzled the world. But there’s a secret to Bryan’s success: Every canvas is inspired by an unusually vivid dream. When Bryan awakes, he possesses extraordinary new skills . . . like the ability to speak obscure languages and an inexplicable genius for chess. All his life, he has wondered if his dreams are recollections—if he is re-experiencing other people’s lives.

Linz Jacobs is a brilliant neurogeneticist, absorbed in decoding genes that help the brain make memories—until she is confronted with an exact rendering of a recurring nightmare at one of Bryan’s shows. She tracks down the elusive artist, and their meeting triggers Bryan’s most powerful dream yet: visions of a team of scientists who, on the verge of discovering a cure for Alzheimer’s, died in a lab explosion decades ago.

As Bryan becomes obsessed with the mysterious circumstances surrounding the scientists’ deaths, his dreams begin to reveal what happened at the lab, as well as a deeper mystery that may lead all the way to ancient Egypt. Together, Bryan and Linz start to discern a pattern. But a deadly enemy watches their every move, and he will stop at nothing to ensure that the past stays buried.

Spanning six continents and more than 10,000 years, the riveting story of a young couple whose shared visions reveal an ancient mystery—and prove that love can truly withstand the test of time.

“The guy-meets-girl story as you’ve never heard it before…A mind-explosion of a journey ensues that involves time travel, mystery, love, and a whole lot of plot twists.” ―Refinery29

“Suspenseful and ambitious…We predict The Memory Painter‘s story of love and revenge will be one of 2015’s biggest literary hits.” ―Paste Magazine (Best New Books of the Month)

“It’s a thriller as well as a love story, spanning 10,000 years of history. And it sounds freaking mental.” ―io9, The Most Essential Science Fiction and Fantasy Books of the Month

“Womack’s debut is one of those rare works that impresses from the first vivid, unsettling scene, gradually building an atmosphere of secrecy and trepidation that ensures that the suspense remains high throughout. Part mystery, part science-fiction plot and part romance, this is a novel with broad cross-genre appeal, and the well-drawn scenes and flashes of humor and insight give this thriller a rare depth as well.” ―RT Book Reviews

“It’s best not to try to analyze the ambitious plot of this thriller, which combines romance, fantasy, and adventure; just hang on for a wild and entertaining ride around the world and through the centuries back to ancient Egypt.” ―Library Journal (starred review)

“A page turner that will keep readers up late into the night. Readers who love adventure, romance and fantasy will love this book.” ―The Vancouver Sun

“Womack makes a romantic case for the existence of destiny…and does a beautiful job…Dive into this sweeping, romantic journey that will leave you breathless and a little unsure of where in time you’ve landed.” ―Kirkus Reviews (One of the Best Science Fiction, Fantasy, and Horror Reads of the Month)

Author visits with Gwendolyn Womack are available via NovelNetwork.com.