The Librarian Spy by Madeline Martin 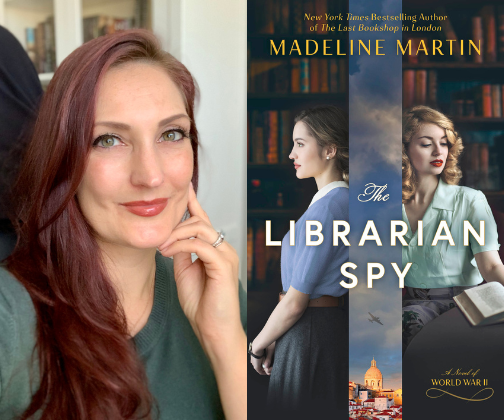 From the New York Times bestselling author of The Last Bookshop in London comes a moving new novel inspired by the true history of America’s library spies of World War II.

Ava thought her job as a librarian at the Library of Congress would mean a quiet, routine existence. But an unexpected offer from the US military has brought her to Lisbon with a new mission: posing as a librarian while working undercover as a spy gathering intelligence.

Meanwhile, in occupied France, Elaine has begun an apprenticeship at a printing press run by members of the Resistance. It’s a job usually reserved for men, but in the war, those rules have been forgotten. Yet she knows that the Nazis are searching for the press and its printer in order to silence them.

As the battle in Europe rages, Ava and Elaine find themselves connecting through coded messages and discovering hope in the face of war.

“This story blew me away. Readers will be on the edge of their seats as they are transported to 1940s Portugal and France with Madeline Martin’s vivid and inspiring characters. The Librarian Spy is a brilliant tale of resistance, courage and ultimately hope.”—Kelly Rimmer, New York Times bestselling author of The Warsaw Orphan

“Madeline Martin immerses us in the expertly rendered and fascinating worlds of Lisbon and Lyon during the war as we follow the stories of two brave women who are willing to risk everything for the cause of freedom. Uplifting, inspiring and suspenseful, this is one to savor!” –Natasha Lester, New York Times bestselling author of The Riviera House

“Madeline Martin is a fantastic author, and this beautiful, heartbreaking tale of two young women who risk everything as they use the power of words to fight back against the Nazis will have you glued to your chair. The Librarian Spy is a stunning tour de force of historical fiction.”—Karen Robards, author of The Black Swan of Paris

“In Madeline Martin’s stirring new novel, readers will be whisked into her brilliantly depicted portrayal of 1940’s Lisbon, Portugal, and Lyon, France. Martin captures the essence of the French resistance in war-riddled France as we race with hearts in our throats through Elaine’s harrowing tale, juxtaposed with Ava’s thrilling and engrossing passages illustrated with sensory delights. Both heroines push the boundaries of their worlds, risking much in their shared missions for survival and hope. Not to be missed, The Librarian Spy is an inspiring novel that highlights the women who dared to resist in the face of adversity.” —Eliza Knight, USA To bestselling author of The Mayfair Bookshop

“Martin shows great reverence for the power of the written word in her pacey new novel, The Librarian Spy, set during the tumultuous backdrop of WWII in Lisbon and Lyon, when Nazis attempted to silence the press of the Resistance. This engaging, lively read featured a cast of characters I loved to root for and I couldn’t put it down!”—Heather Webb, USA TODAY bestselling author of The Next Ship Home

The danger of Resistance Lyon and the uncertainty of refugee life in wartime Lisbon leap off the page in Madeline Martin’s The Librarian Spy. She artfully weaves an incredible, tense tale that will set your heart pounding as her characters navigate life and death decisions in this incredible novel of sacrifice, struggle, and hope. This is historical fiction at its absolute best! —Julia Kelly, international bestselling author of The Last Dance of the Debutante

“From Lyon to Lisbon, the settings in The Librarian Spy are every bit as vivid and appealing as the women working in Resistance. Madeline Martin takes readers into the belly of the beast, but with characters of such determination, heart, and strength, hope never fails. In increasingly dark times, The Librarian Spy is the book we need.” —Erika Robuck, National Bestselling Author of Sisters of Night and Fog
–This text refers to an alternate kindle_edition edition.

Author visits with Madeline Martin are available via NovelNetwork.com.