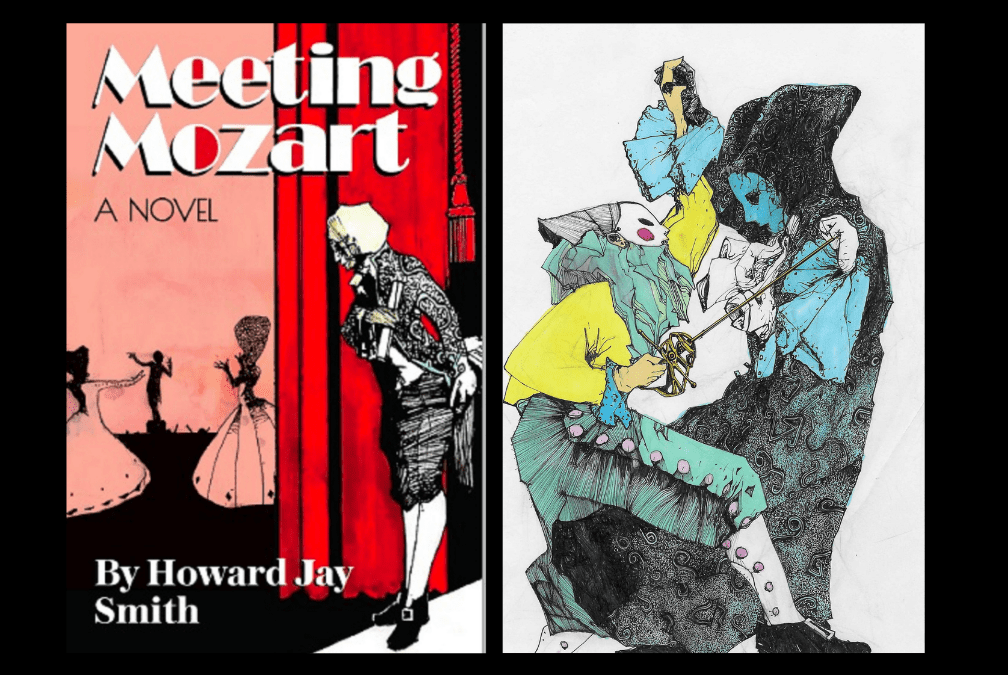 an essay by Howard Jay Smith

Without question, Lorenzo Da Ponte is the single most important Jew in the history of opera, yet few people know the name of this writer who made it possible for Mozart to be revered today as the greatest opera composer of all time. Without Da Ponte’s libretti – that is to say, the story and words – Mozart would have never been able to compose the three musical scores “Don Giovanni,” “The Marriage of Figaro,” or “Cosi Fan Tutte,” that have graced him with eternal fame.

Nonetheless, for all Da Ponte’s brilliance in creating these works, behind his back, he was derogatorily referred to as “Mozart’s Jewish Priest.”

So, who was Lorenzo Da Ponte, the man who not only wrote for Mozart, but also ended up before his death 89 years later, as an integral part of the cultural history of early modern New York and the man who brought opera to that city?

As a writer whose European family was murdered in the Holocaust, I have always been attracted to stories that have a personal resonance. My latest novel, “Meeting Mozart; From the Secret Diaries of Lorenzo Da Ponte,” is no exception. The book explores how Da Ponte and his modern day descendants endured the anti-Semitism of Europe, 19th century New York City, and the Holocaust, by asking the question: “How does a Jew survive in an essentially hostile world?”

Da Ponte was born Emanuele Conegliano in 1749, into working class poverty in the Jewish ghetto of his village of Ceneda. Ceneda is in the Veneto, not far from Venice in an era when people wore masks and capes year-round. His family was so poor that Lorenzo, a gifted polymath, with no formal education, was entirely self-taught. Consequently, he was known as the Spiritoso ignorante—the ignorant genius.

Although he had his Bar Mitzvah at age thirteen, a year later, Da Ponte’s father, a widower, married a Catholic woman. In order to do so, his father had to convert the entire family. This transformation from Jew to Catholic had severe consequences for young Emanuele and his younger brothers. In a mere instant, Emanuele was torn away from his Jewish community and his Jewish girlfriends, who remained behind in the ghetto. Like all such Conversos, Da Ponte was forbidden to have any contact whatsoever with any Jew, on the penalty of death, imprisonment or a life of servitude in the galleys of the Venetian Navy.

Emanuele tried to make the best of a horrible situation, a survivalist trait that would serve him well throughout his life. He took the name of the bishop doing the conversion and thus became, Lorenzo Da Ponte.  Desirous of an education, Lorenzo convinced the bishop to allow him to attend school at a seminary. Little did he understood that becoming a priest, was the end route of his studies.  Though such a career was in total opposition to his nature – he loved women and never tolerated celibacy – Lorenzo initially accepted this Devil’s bargain.

Da Ponte was assigned as an abbé at the Church of San Luca in Venice. Despite his great intellect and writing abilities, He cared not at all for Church doctrine and made for a terrible priest. There, in a city known well for its wicked, wicked ways, he counted the infamous Casanova among his closest friends. Thus, on Sundays, the Abbé Da Ponte would hear confession but on the other six days of the week, he would gamble, drink, write risqué poetry, and engage in wild romantic affairs, Eventually he ended up living with Angela Tiepolo, the first of his many his mistresses, a married woman from one of the wealthiest families in Venice.

He was ultimately denounced as a Jewish heretic by another lover’s estranged husband and was ordered to stand trial. Casanova, who understood the forces that were being aligned against Da Ponte, urged him to flee Venice rather than risk being tossed into the infamous prison beneath the Bridge of Sighs.

Once more reinventing himself as a professional writer, the Abbé Da Ponte turned up in 1781, in Vienna with a letter of introduction to Salieri, the Court Composer for the Hapsburg emperor, who in turn hired Da Ponte as the Court Librettist.

Given that Vienna, the Hapsburg’s Imperial Capital, was not particularly welcoming to Jews, Da Ponte hid his true heritage as best he could behind his priestly façade. Vienna in fact had been the scene of one of the most brutal destructions of the Jewish communities there during the Middle ages.  In 1421, in an event known as the Vienna Gesera, the Hebrew Temple was burnt to the ground and the entire Jewish community that did not flee, was massacred. In Da Ponte’s time anti-Semitism remained rife in Vienna. Through another sympathetic Converso, the Baron Raimund Wetzlar von Plankenstern, Da Ponte was introduced to a struggling but brilliant composer desperate to break in to the world of opera, Wolfgang Amadé Mozart. The two equally matched geniuses, became fast friends.

At that point in Mozart’s career, he was stymied in his struggles to compose an opera – an Italian language opera – for the Hapsburg Court Theater. Following his move to Vienna, also in 1781, Mozart was considered a brilliant pianist and composer for the keyboard, but few considered him worthy as an opera composer compared to those Italians dominating the stage at that same time such as Salieri, Paisiello and Martin Y Soler. No one wanted to work with him, and that included the Emperor Joseph II – who owned the theater – and his Lord Chamberlin, Count Franz Orsini Rosenberg, who ran the Court Theater.

It has long been the axiom of the opera world – a false axiom – that great operas come about because of the composers who create the music and the singers who bring them to life. It is a fiction, a convenient fiction and one that has long diminished the work of the writer. Yes, without a libretto there simply is no music and no songs. And without a strong and solid story and lyrics set before them, even the best opera composers, would be staring helplessly at a blank page without a clue as to what to do next.

Mozart finally got his first shot at composing an Italian language opera for the Hapsburgs only after Da Ponte persuaded Emperor Joseph II that his adaptation of a banned French play, “The Marriage of Figaro,” would make a perfect opera. Why? Because he – Da Ponte – had the foresight to take out all of the offensive political elements. After reading the libretto, the emperor agreed.

Not only was “Figaro” a grand success, to this day it is the oldest continuously performed opera in the world and ranks in the top five of most critics’ lists. “Figaro” led to a commission for “Don Giovanni,” also considered one of the great operas of all time. “Don Giovanni’s” success encouraged Joseph II to commission “Cosi Fan Tutte,” an ever popular sexual farce that mimicked not only Da Ponte and Mozart’s actual lives, but that of the Emperor’s as well.

This diminishment of Da Ponte’s role took an even more sinister turn under the Third Reich. Da Ponte’s Jewish-Italian heritage was an affront to the Nazi Party, who were concerned about promoting the Germanic notion of the Ubermensch. To build up the Austrian born and reared Mozart into a Germanic hero, the Nazis under Goebbels insisted that all his operas be translated and performed in German and not their original Italian. Da Ponte’s name was banished from the record and replaced on opera title cards by the various translators who transformed his libretti into German.

However, Da Ponte’s real life escapades – and Jewish heritage – continued to get him into trouble with the Hapsburgs. When Joseph II died and his brother, Leopold took over the throne, the outspoken Da Ponte found himself in trouble and was once more forced to flee, only this time he did it with a twist. In 1791 at age forty-two, and after twenty years of philandering and torrid affairs, he snuck back into the Veneto and was married to Nancy Grahl, another Converso, by a rabbi. They would remain faithful to each other for the next forty years of their lives together.

Given that it was still not safe for Da Ponte, a Jewish Converso priest, to remain in the Veneto, he and Nancy emigrated, first to London, and then in 1805, to New York. Early modern New York was no haven for Jews and so Da Ponte resumed his pretense of being Catholics. Ever the survivor, Da Ponte first opened up dry goods store in New Jersey and then later he started an Italian bookstore in lower Manhattan where he met and became friends with Clement Moore, a professor whose father was the Episcopal Bishop of New York and the head of what became Columbia University.

Moore – later the author of “The Night Before Christmas” – introduced the Da Pontes to the elite of New York City, including James Fenimore Cooper, Washington Irving, Samuel F. B. Morse, Williams Cullen Bryant, Henry Wadsworth Longfellow, and Joseph Bonaparte, Napoleon’s brother, who was then living there in exile.

The Moore’s engaged Da Ponte as the first teacher of Italian at Columbia University. He was also ironically, the first priest and first Jew to teach at bastion of this Episcopal education. To this day, the Italian Language Library at Columbia is named for Da Ponte. More significantly, in the 1820’s and 1830’s, and with the financial help of his friends, Da Ponte started the first two opera companies New York. These theaters paved the way for the most preeminent opera theater in America today, the Metropolitan Opera House.

Inspired by Casanova’s epic autobiography, Da Ponte used his time in New York to wrote his own account of his life, one volume of which is supposedly missing – the secret diary that purportedly describes his life as a Jewish Converso.

Da Ponte passed away in 1838 at the age of 89 and was buried in a Manhattan Catholic church cemetery – but his grave has disappeared – leaving us to wonder if in fact his coffin was not perhaps reinterred in some forlorn Jewish graveyard under the name Emanuele Conegliano.

Howard Jay Smith is the award-winning author of Beethoven In love; Opus 139, and Meeting Mozart: From the Secret Diaries of Lorenzo Da Ponte. Smith serves on the board of directors of the Santa Barbara Symphony and is a member of the American Beethoven Society.  He is currently at work on a new novel about Giuseppe Verdi.

Author visits with Howard Jay Smith are available via NovelNetwork.com.