The Book Whisperer Insists You Read You Belong Here Now! 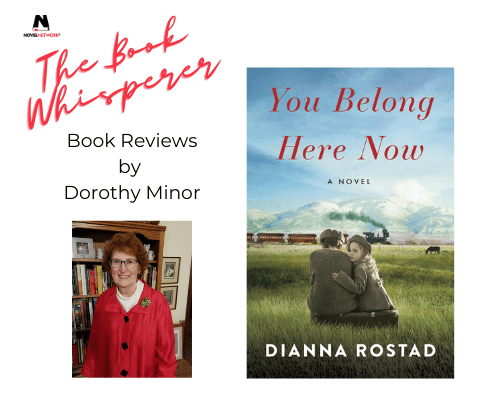 NovelNetwork member, book club manager, and blogger extraordinaire Dorothy Caldwell Minor, aka The Book Whisperer, feels pretty strongly about YOU BELONG HERE NOW by Dianna Rostad. In fact, she insists you read it! Here’s why:

Several months ago, I watched a live Zoom interview with William Kent Krueger, whose books I truly enjoy. Dianna Rostad, a debut author, was a member of the Zoom as well. Krueger praised Rostad’s upcoming novel, You Belong Here Now. Naturally, Krueger’s endorsement made me interested in reading You Belong Here Now. I was delighted when the book was a choice through BookTrib, a source that promotes authors and books and allows readers to review free copies. Readers will find this review fair and unbiased.

Dianna Rostad has created memorable characters in three orphans: Charlie, Opal, and Patrick. The children, unrelated to one another, become part of an orphan train from NYC heading into the raw American West in 1925. Opal and Patrick are legitimately on the orphan train. Charlie, somewhat older at 16 and large for his age, has wrangled a place aboard the train because he needs to escape from NYC. He, too, is an orphan, and he has been living on the streets.

At stop after stop long the way, Charlie, Opal, and Patrick are shunned by those who come to either adopt the children or at least take them into their homes. Of course, readers know that some of the children will be well-kept and loved, but many of them will be used as slave workers, especially by those who are unscrupulous.

Opal, who refuses to speak, is about 6 years old. Patrick is Irish and has lost his whole family to the Spanish flu. Charlie’s dad simply disappeared and his mom fell into drug abuse. He drifted away from his mom onto the streets of Hell’s Kitchen where he did what he could to survive. On the train, Opal latches onto Charlie as does Patrick. Charlie does all he can to push them away, but his heart is soft, and he becomes their protector.

In desperation, Charlie, Patrick, and Opal leave the train in Montana and think they will make a go of life on their own. Charlie is caught by the Stewart family trying to steal a horse. Instead of turning him into the sheriff, the family tells Charlie he will work off his misdeed. Then, of course, Charlie has to tell the family about Opal and Patrick who are waiting for him to return.

As readers can guess, the Stewarts do take all three children for what they think will be a temporary period. Mrs. Stewart falls in love with Opal and starts teaching her to cook and help around the house as well as take care of the chickens. Mrs. Stewart had lost a daughter to a cattle stampede. She has two adult children, Nara and John. Nara would like to take over the farm, but she knows it will be difficult since she is a female. John, her brother, has fled to the city to become an artist.

Nara is tough and particularly unhappy about having the three children on the farm. Still, Charlie is a large boy and a hard worker, so he is useful. Patrick is still young, but he pulls his weight too. Opal, of course, has already won a place in Mrs. Stewart’s heart.

For a time, things go smoothly for the family and the children. There are small bumps in the road, but they are worked out. However, Charlie knows that he was on the orphan train under false pretenses and he also fears Patrick and Opal will be taken away; they have become like his siblings. Larger issues are on the horizon and they will be difficult to surmount.

Readers will hold their collective breaths as they discover the pitfalls the Stewarts and the children face. The big question is what will happen? Mr. and Mrs. Stewart have adult children. Will they be allowed to adopt the three children? Nara is single and she is adamantly opposed to the adoption on any level—although readers can also see that she is beginning to find a soft spot in her heart too—not that it will be won easily.

You Belong Here Now will warm readers’ hearts and shock them too at the abuse children can be made to suffer through no fault of their own. Book club members will find much to discuss in You Belong Here Now. The issue of the orphan train itself and those who run it will create quite a conversation. The sheriff and his mean-spirited wife will also generate a lively discussion. Nara’s hardened ways will become a point of discussion, especially as readers see inside her own thoughts and insecurities.  You Belong Here Now, a debut novel, is a must read and Dianna Rostad is an author to watch!

Be sure to visit Dorothy’s website, Parkdalear’s Blog, and watch for her reviews of our NovelNetwork authors featured there, and shared right here at NovelNetwork.com.