The Assassination of Bobby Kennedy: Three Strikes and the Early Hope of a Generation Is Out 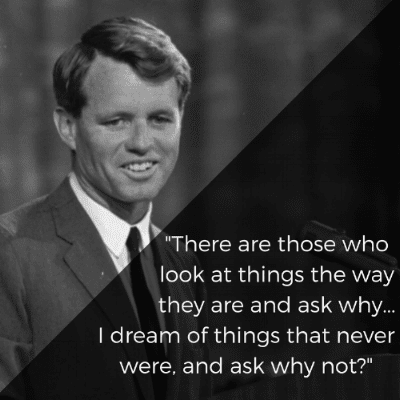 June 6th marked the 53rd anniversary of the assassination of Bobby Kennedy. Unlike that of his brother, five years earlier, I don’t remember exactly where I was when I heard—but I do vividly recall the next day. I was in study hall, supposedly getting ready for what would be the last finals of high school. I was wearing a green skirt. I remember because I kept staring protectively into my lap, away from my books and the tense eyes of others, darting back and forth across the aisles of desks, anxious to commiserate. I couldn’t keep my mind focused and resented that I had to. How could we be expected to study, I screamed in my head? Or even take finals, or even be in school with all this going on? Another Kennedy dead, two months after King. This is happening here, in our country, not some remote third-world place I couldn’t picture. I was terrified. We were terrified.

It Was Supposed to Be the Best of Times…

I was a senior and it felt good to be a high school top dog, finally. Years of tension for me and my family about being able to afford college had been wiped away a few months earlier when I hit the jackpot with a full-ride, four-year scholarship. Whew!

All the exciting senior events had been such fun, and portended early skills and success: the mini-musical I’d written for the annual Variety Show had been a hit, the Moby Dick float I’d designed for Homecoming had won the best-of-parade prize. I’d made my own dress for Prom. I was in choir and Madrigals and we preformed like mad and medaled at state contests. I ran the hot dog concessions at the football games and got an early taste of what it was like to be in charge. There were home teams to support, dances to attend, my first Hike for the Hungry. It was the last burst of childhood, the thrill of college awaited and I wanted to enjoy every minute.

…And Had Become the Worst of Times

But over it all was a pall—a growing drumbeat of dread. I received the letter informing me of my scholarship in February, a few weeks after the Tet Offensive—one step forward, two steps back. We didn’t really understand the rapidly changing details, but suddenly Vietnam was everywhere you turned. Tense, generation-gap dinner table conversations about the war and civil rights went dead silent after King was assassinated, with fear we wouldn’t be able to respect each other if the wrong thing was said out loud. Lyndon Johnson had abdicated the Presidency… Wow. At school, we talked about the racial “situation” in social studies, our choir director wrote a beautiful song, A Prayer for Peace, and we performed it at a special assembly, anxious for healing. The tension continued to crank—classmates were turning eighteen and would be eligible for the draft.

But there was new hope around peace candidates and those who could calm race relations: Gene McCarthy and especially, Bobby Kennedy.

I Admit I Chugged the Kennedy Kool-Aid

My mother was a Kennedy fool and it rubbed off on me. She read everything printed about them, often in publications that resembled movie magazines or today’s People, and relentlessly followed their exploits on television. We were surrounded by Jackie’s fashion choices and conspiracy theories about Jack’s assassination. They were fresh, tragic and irresistible. We felt proprietary and protective about them. I was already tremendously excited about this new world I was about to enter as an adult, filled with space exploration and the British Invasion. When Bobby decided to run for President I transferred this enthusiasm onto him, regardless of the fact that at seventeen, of course I couldn’t vote myself.

Our high school held a mock convention that spring. Students with acting chops took over the roles of candidates including George Wallace and Richard Nixon. McCarthy was the preferred candidate among most kids my age and supporters showed it off, parading around the upper levels of the gym with banners and chanting. But I was “loyal” and stuck it out, lonely on the main floor, with my Kennedy ’68 sign and button. I wore a one-piece, culotte outfit in turquoise, with matching tights. I was hot… and hot for the hope represented by Kennedy.

I loved the words on a poster that eventually ended up on the wall in my college dorm room: “I dream of things that never were and say why not.” Yes, I thought. Yes! Yes! That was how we’ll go forward into the world.

And then Sirhan, Sirhan turned that Yes into No. It was devastating.

The videotape of the assassination was frighteningly close to what we’d seen before—another Kennedy, another head wound. Our memories still retained images of Lee Oswald being gunned down by Jack Ruby, the shot on the balcony in Memphis. People being murdered on TV! The Bobby blow was horrible, but it was the pattern that shook us: three assassinations, here, in the United States. Who would be next? Certainly, Ted Kennedy if he decided to run some day: Don’t Do It!  The environment was not unlike how we feel about today’s relentlessly repeating school shootings. Disturbed people could surface out of nowhere, with crazy logic, for a cause that made sense to only them. It could happen anytime, anywhere. The Democratic Convention was coming to Chicago in the summer, my city, my home. Leaders ripe for the pickings. It wasn’t a matter of if, but when, for the next one. Brace yourself.

The last 45 RPM record I ever bought was Abraham, Martin and John. It was recorded by Dion, of Runaround Sue fame—that had always been one of my favorite songs, and now so was this very different tune.

Has anybody here seen my old friend Bobby,
Can you tell me where he’s gone?
I thought I saw him walkin’ up over the hill
With Abraham, Martin and John.

Take a listen here to Abraham, Martin and John. Have a tissue handy.

A Generation Bookended by Tragedy

I’ve never forgotten that June day in Study Hall. It was the week before graduation and I was about to launch out into a world that had been so enticing, and now was so terrifying. I’ve thought about it over the years and feel that third assassination was the moment that finally scoured off all feelings of childhood safety. I think we, as a generation, were gut punched at our most formative moment. After, there was a tremendous rage and energy to use all the upheaval to change to world. Yes, much of it was necessary and ultimately positive—and I participated enthusiastically—but a lot of it was born in the violence of three symbolic murders. By the time the Vietnam War finally sputtered to a pointless end, many of us were disillusioned with our inability to make enough of an impact. We moved into the Me Generation. Let’s focus on something we can control—ourselves and the lives of those we hold close. It became a time of Nixon and there were no politicians to trust as we trusted Bobby.

I feel that for those of us who came to adulthood in that fateful time there has always been a pull to return to the optimistic work of changing the world. I’ll come back to it someday, we think, when my career is set, my children on their way, when those things under my control are settled. That’s when I’ll regroup and see how I can make that difference after all. Then came 9/11 and the world is a scary place again. The assassinations and the missing World Trade Center—the violent bookends of our generation, as I see it from my armchair.

I reject the notion that we’re whiny boomers, that we blew it and we’re done. There’s no doubt we’ve upended every status quo with every decade we’ve passed through. And, there’s still a lot of world to change, and energy to do it. But there’s nothing like that feeling of limitless hope and possibility, of first love. Ours was cut short, in June of 1968.

Isn’t it pretty to think so.

Rita Dragonette is a writer who, after spending nearly thirty years telling the stories of others as an award-winning public relations executive, has returned to her original creative path. The Fourteenth of September, her debut novel from She Writes Press, is based upon her personal experiences on campus during the Vietnam War. It has received the Readers’ Favorite Award for Historical Era (finalist 2020), Best Book Award for Historical Fiction (finalist 2019) and Women’s Fiction (finalist 2019), National Indie Excellence Awards for New Fiction (2019) and Best Cover Design (2019), Beverly Hills Book Award for Women’s Fiction (2018), American Book Fest Fiction Awards for Literary Fiction (finalist 2018) and Best Cover Design (finalist 2018) and the Hollywood Book Festival (honorable mention 2018, general fiction). She is currently at work on three other books: an homage to The Sun Also Rises about expats chasing their last dream in San Miguel de Allende, a World War II novel based upon her interest in the impact of war on and through women, and a memoir in essays. She lives and writes in Chicago, where she also hosts literary salons to showcase authors and their new books to avid readers. To learn more please visit www.ritadragonette.com.

Rita Dragonette is available to visit with book clubs via NovelNetwork.