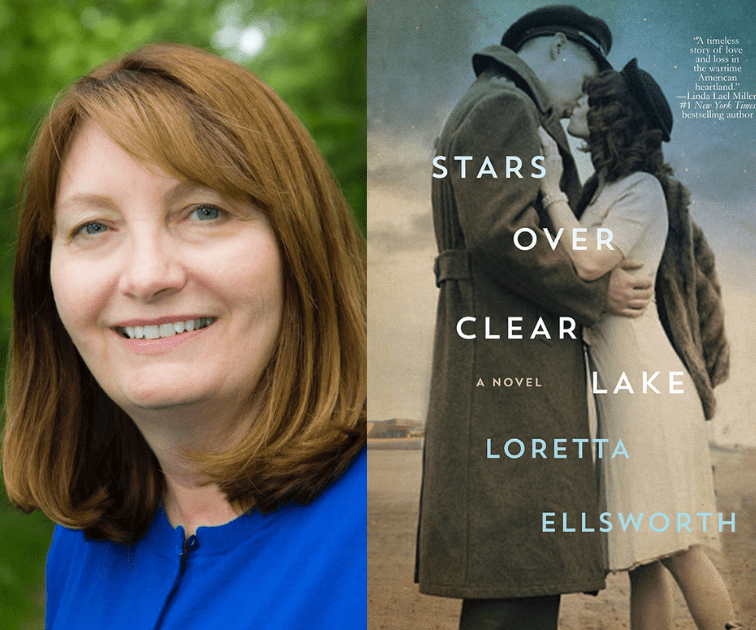 Mesmerizing and romantic, Stars Over Clear Lake transports readers to the Surf Ballroom, where musical acts became legends in the 1940s and which holds the key to one woman’s deepest secret.

Lorraine Kindred’s most cherished memories are of the Surf Ballroom, the place where youth lost themselves to the brassy sounds and magnetic energy of the big band swing, where boys spent their last nights before shipping off to war―and where Lorraine herself was swept away by a star-crossed romance.

Returning to the ballroom for the first time in decades, Lorraine enters a dazzling world she thought long vanished. But as the sparkling past comes to life, so does the fateful encounter that forced her to choose between her heart and her duty all those years ago―and Lorraine must face the secret she’s buried ever since. Along the way, she’ll rediscover herself, her passion, and her capacity for resilience.

Set during the 1940s and the present and inspired by a real-life ballroom, Loretta Ellsworth’s Stars Over Clear Lake is a moving story of forbidden love, lost love, everlasting love―and self love.

“Stars Over Clear Lake is an absorbing love story full of nostalgia, heartbreak, and secrets long buried―whether to protect others or simply for survival. Highlighting the lesser-known history of POWs in America during World War II, Ellsworth’s tale serves as a timely reminder of the humanity that connects us, regardless of borders or circumstance, to even those labeled ‘the enemy.’ A memorable, highly transporting novel.”―Kristina McMorris, New York Times bestselling author of The Edge of Lost and The Pieces We Keep

“A heartfelt, stirring novel of love, loss and redemption. Told in rich historical detail and with unflinching honesty, Stars Over Clear Lake sweeps the reader back and forth between the stark reality and the sacrifices brought on by war and the healing powers of hope, love and forgiveness.” ―Heather Gudenkauf, New York Times and USA Today bestselling author of The Weight of Silence and Missing Pieces

“A moving and life-affirming story that illuminates an often overlooked chapter in American history. Loretta Ellsworth takes the reader on an enthralling journey through the ups and downs of the human heart.” ―Ann Howard Creel, author of The Magic of Ordinary Days and While You Were Mine

“Loretta Ellsworth has written a moving romance that, at the same time, illuminates a little-known aspect of World War II history―the presence of German prisoner of war camps in the American heartland. With warmth and candor, Ellsworth brings that period, and the people who lived through it, to life.” ―Dana Sachs, author ofThe Secret of the Nightingale Palace and If You Lived Here

“In this wonderful book, we are given so much history, how World War II played out in the middle of the country, this musical era, the tale of the POW camps in Iowa. A very moving, musical, and magical love story.” ―Mary Logue, author of the Claire Watkins mysteries

“Ellsworth’s depiction of 1940s life in a rural Iowa town, complicated by the tragedies of World War II, vividly brings this novel to life. Yet it is the focus on love, loss, and life choices that will resonate most with the reader.” ―Publishers Weekly

Author visits with Loretta Ellsworth are available via NovelNetwork.com.