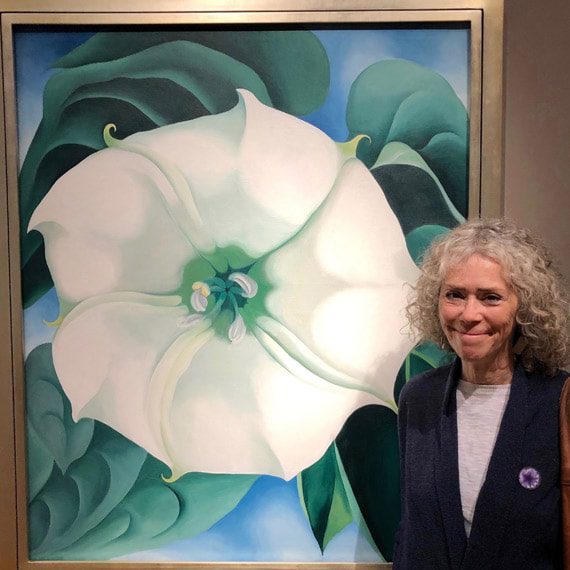 When I began my study of iconic American painter Georgia O’Keeffe, whose art and life frame Queen of the Owls, I had no idea that I would learn as much about myself as I would about O’Keeffe.

Georgia O’Keeffe, who died in 1986 at the age of ninety-eight, remains the most influential female American painter of all time. Her Jimson Weed/White Flower No. 1 (1932) holds the record for the highest price ($44.4 million) ever paid for a work by a woman artist. (And yup that’s me in front of the painting! More photos like this one on the Gallery Page of my website at www.BarbaraLinnProbst.com)

O’Keeffe is best-known for her desert landscapes and oversized flowers, but she also spent nine weeks in Hawaii, where she produced a unique set of paintings. When I learned about this little-known interlude in her life, I became intrigued.

So too, Elizabeth, the protagonist of Queen of the Owls, wants to understand how O’Keeffe’s time in Hawaii changed her—not only as a painter, but as a woman. Elizabeth’s academic adviser tells her: “You don’t have to be right. You just have to be scholarly. Cite your sources, back up your arguments.” But Richard, the charismatic photographer who disrupts Elizabeth’s carefully-constructed world, sees it differently. “You’ll never understand anything that way. You have to get inside her skin, do what Georgia did.”

It doesn’t take long for Richard’s real message to become clear. Elizabeth needs to go beyond books and words. She needs to pose nude, as O’Keeffe did.

Owlish Elizabeth has always relied on her intellect, yet she’s mesmerized by the embodied knowledge that Richard seems to offer. Filled with longing and dread, she takes a step she never imagined, and her life begins to unravel.

Right about now, you may be starting to wonder if Elizabeth is me, not-so-thinly disguised, and if “learning about myself” means that my journey mirrored Elizabeth’s. If that’s what you’re thinking, you’re correct, at least in part.

Not that I posed nude. (Sorry.)  But I did try to understand O’Keeffe’s experience through my senses and flesh, and I did submit to the camera’s gaze.

I began my search for understanding in the obvious ways. I read every book and article I could find. I traveled to the O’Keeffe Research Center in Santa Fe to examine newspaper clippings and archival material that wasn’t available online. I studied photographs of O’Keeffe and read her correspondence with Alfred Stieglitz. I spoke with experts: the director of the Georgia O’Keeffe Museum, the curator of the landmark exhibit of O’Keeffe’s Hawaii paintings, a scholar who’d written about O’Keeffe’s relationship with feminism.

I went to see O’Keeffe’s paintings. Luckily, there were several exhibits during the time I was working on Queen of the Owls, so I travelled to see them for myself. I even arranged for a private showing of one of O’Keeffe’s masterpieces that wasn’t on public view. I wanted to follow the advice that Elizabeth imagines Georgia would have given her: “Look at the paintings. Let them speak for themselves.”

Next, I went to see some of the “real things” that O’Keeffe painted. I visited Ghost Ranch and saw the desert landscapes she captured in her paintings—red hills against an impossibly blue sky, the fragile beauty of the jimson weed in a dry gulch. In Hawaii and at New York’s Botanical Garden, I saw many of the flowers that O’Keeffe depicted in her Hawaii paintings—the bright red heliconia, the plumeria and pink banana plant. In fact, they’re all quite small, unlike the oversized flowers in the paintings. I began to sense the intention behind O’Keeffe’s words: “I decided that if I could paint that flower on a huge scale, you could not ignore its beauty.”

I visited Sun Prairie, Wisconsin, O’Keeffe’s birthplace, and saw the land and sky that shaped her when she was a child. I went to her home at Abiquiu to see how she lived in her later years. Her furniture, dishes, clothes, garden. The sharp desert rocks and the view from her window—experiences I never could have had, just by reading and talking.

I even went to Hawaii. By a lucky coincidence, there was a writers conference on Kauai that I wanted to attend. One of my strongest impressions, as soon as I stepped off the plane at Lihue’s patio-like airport, was of the tropical air—its thickness and softness, a completely different kind of heat than I’d experienced in New Mexico. I couldn’t help thinking that it must have been startling for O’Keeffe too. The sensation of one’s skin—walking, breathing, existing—as different from New Mexico as the verdant green hills were from the rust-colored rocks.

But even that wasn’t enough. I had to understand the book’s central act—when Elizabeth offers herself to Richard’s gaze.

I don’t mean to imply that an author has to do and experience everything her characters do and experience. In many genres—like horror, fantasy, and historical fiction—that would be impossible, and no one would expect someone who writes thrillers to engage in every stunt and close escape. Yet there does need to be a kernel of lived experience that can be expanded, embellished, translated, for the sake of the story.

For Queen of the Owls, it was the experience of being exposed. Seen.

As it happened, I needed a professional headshot for my new website, so I hired a photographer and spent a whole afternoon with him as he shot nearly a hundred photos. As someone who’s always disliked—and avoided—having my picture taken, this was a first for me. Despite my reticence, and despite my initial attempts to look the way I thought an author ought to look, rather than like myself—somehow I let go and let myself be revealed.

I surrendered. I agreed to be seen.

I was fully clothed, yet the emotional core of my experience was the same as what I wanted for Elizabeth. And from that interior place, later, I was able to write the scenes the story required. No trip to a museum or historical site to show me the way. No O’Keeffe biography or exhibit. Only myself.

As I said: I had no idea what I was getting into when I decided to learn about Georgia O’Keeffe in order to weave her into my narrative. Nor did I guess that my own journey through “ways of knowing” would parallel the journey of my protagonist. Had I limited myself to articles and interviews and descriptions of O’Keeffe’s paintings, Queen of the Owls would have been a different book, less authentic and more contrived. And I would have been a different sort of writer.

In Hawaiian, the word for thank you is mahalo.

Mahalo for the gift of the journey.