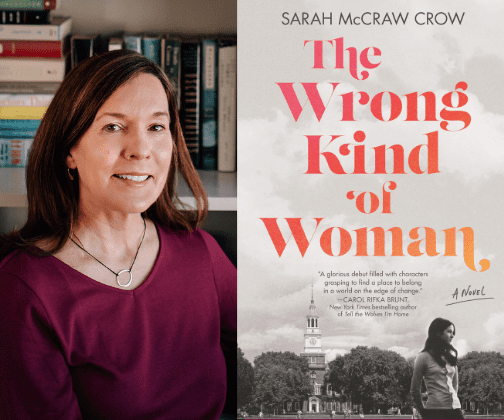 Sarah McCraw Crow is the author of the novel The Wrong Kind of Woman (MIRA Books, October 6, 2020). She is a longtime magazine writer, editor, and book reviewer, and her articles, essays, and reviews have run in BookPage, The Christian Science Monitor, Prime Number, Family Circle, Ladies’ Home Journal, Parents, Parenting, American Baby, Baby Talk, and Working Mother, among others. Her short fiction has won prizes from So to Speak and Good Housekeeping, and her stories have been honored as contest finalists by Press 53, New Letters, Yemasee, and Stanford Alumni Magazine.

As a child, Sarah lived in Florida, Georgia, North Carolina, and Texas as her dad finished his medical training and served in the military, but she did most of her growing up in Virginia. For the past twenty years, she has called New Hampshire home. She lives with her husband and three almost-grown children on an old farm, where she gardens in the summer and snowshoes in the winter, if there’s snow. And although she’s a transplanted Southerner, she has come to realize that temperamentally, she’s a northern New Englander.

She is a graduate of Dartmouth College (AB, history), Stanford University (MA, journalism), and Vermont College of Fine Arts (MFA in writing), and she’s a member of Grub Street, Boston, and the National Book Critics Circle.

ABOUT THE WRONG KIND OF WOMAN:

In late 1970, Oliver Desmarais drops dead in his front yard while hanging Christmas lights. In the year that follows, his widow, Virginia, struggles to find her place on the campus of the elite New Hampshire men’s college where Oliver was a professor. While Virginia had always shared her husband’s prejudices against the four outspoken, never-married women on the faculty—dubbed the Gang of Four by their male counterparts—she now finds herself depending on them, even joining their work to bring the women’s movement to Clarendon College.

Soon, though, reports of violent protests across the country reach this sleepy New England town, stirring tensions between the fraternal establishment of Clarendon and those calling for change. As authorities attempt to tamp down “radical elements,” Virginia must decide whether she’s willing to put herself and her family at risk for a cause that had never felt like her own.

Told through alternating perspectives, The Wrong Kind of Woman is an engrossing story about finding the strength to forge new paths, beautifully woven against the rapid changes of the early 1970s.

PRAISE FOR THE WRONG KIND OF WOMAN:

“In her entrancing debut, McCraw Crow traces the impact of second-wave feminism and the antiwar movement in the early 1970s on a New Hampshire college campus. . . . The choice to present the characters’ desperate actions in shades of gray makes for engrossing reading.” —Publishers Weekly

“Sarah McCraw Crow’s writing is layered with so much insight and compassion. A glorious debut filled with characters grasping to find a place to belong in a world on the edge of change.” —Carol Rifka Brunt, New York Times bestselling author of Tell the Wolves I’m Home

“The Wrong Kind of Woman is the right kind of book. A beautifully written exploration of loss, the novel captures its characters at the cusp of personal and social change. Sarah McCraw Crow deftly navigates the campus and national politics of the ’70s in a way that remains timely and pressing today. A powerful, thought-provoking debut.” —Amy Meyerson, Nationally bestselling author of The Bookshop of Yesterdays

“McCraw Crow brings to life the early days of the women’s movement. The Wrong Kind of Woman is the story we need now: one which examines systemic sexism through not only a historical filter but via rich and authentic characters. Virginia’s struggle echoes the struggle of so many women, throughout history.” —T. Greenwood, bestselling author of Keeping Lucy

“How could I not devour a book set in my favorite era? About family, marriage, love and grief and a country in the turbulent flux of change, The Wrong Kind of Woman limns the lives of a stunned widow, her daughter and a student as they all struggle to come to terms with death—and life—against the backdrop of the Vietnam war, Kent State, the drug culture, and the first heady rise of the women’s movement. Absolutely fabulous.” —Caroline Leavitt, New York Times bestselling author of Pictures of You and Cruel Beautiful World

“A professor’s death wrenches his wife and daughter into a new world as they join women fighting for equality in the early seventies, a time when elite education is cracking open by those knocking down single-gender barriers. The Wrong Kind of Woman explores the strength women found to stop papering over the glaring flaws in the world and live with eyes wide open with grace and honesty.” —Randy Susan Meyers, author of Waisted

“With equal parts shrewdness, wisdom, and warmth, Sarah McCraw Crow’s debut novel brings a canny eye to a forever lively moment in U.S. history. Like Marilyn French and Erica Jong before her, Crow lets her cast of characters speak to and for its readers about their mom’s, their dad’s, and their own enactment of the 1970’s wave of what once was, still is, and will surely again be called The Women’s Movement. Graceful, solid, and beautifully rendered, The Wrong Kind of Woman is exactly the right kind of book for all of us.” —Abby Frucht, author of Maids