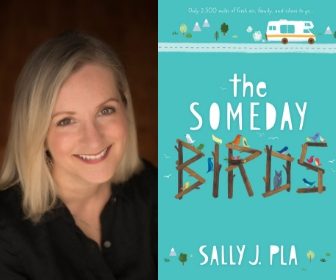 Hi! I write books for young people. Well, I kind of hope I write them for everyone.

Most of my stories have characters in them who think about the world just a little bit differently. Who knows – Maybe you will see yourself in them, or someone you know!

I’ve lived for many years both in the Northeast and Midwest, and in South America for a few years when I was a teenager, but now I live in California. I’ve loved everywhere we’ve lived. I’ve also had many different jobs, although the one job I love the best is — you guessed it — writing books.

‘Pla’ is an odd last name. But if you go to Barcelona, it’s common, because it’s Catalan. Pronounced like “Blah,” but with a ‘P,’ it totally seems like it should have more letters. But it doesn’t. It means “flat,” like the plateaus in the Pyrenees, mountains between France and Spain. PLA-teaus.

I’ve thought of myself as a writer since I was in second grade at Mill Hill School in Southport, Connecticut. That was when my teacher, Mrs. McDonald, saw a story-telling glimmer and encouraged me. I had another wonderful teacher at Mill Hill named Mr. Simpson. CLICK HERE if you want to read something I wrote about Mr. Simpson.

I’m a big dog person. Here’s me as a kid with my dog Lucky:

Here’s our golden retriever, Casey, in a real glamor shot!

Here’s me now, with Leo, my giant golden-doodle pup. (Maybe not really THIS giant IRL)

I know what it feels like to be a little different, a little off, and very unsure, in a world that can be straight and narrow-thinking about what it calls ‘normal.’ I know what it feels like to be scared of pretty much everything. And to choose not to speak. Here’s a photo of me from the days when I was called too sensitive, too timid, and too silent. I was very fearful and bewildered by things. I mainly liked to spend time alone, in the quiet. And I loved the outdoors.

I felt a lot of self-doubt and fear as a child. I think all of my writing so far is about learning to understand, accept, befriend, and move past Fear. About learning to feel more at ease in the world. Learning that it can get better, get easier. I hope my books will make you laugh, and also, feel little heart-pangs of recognition about everything we have in common, being human and all.

Here’s another photo of my dog Leo, just for the heck of it. Can’t resist dog photos!

I’ve lived in New York, Connecticut, Ohio, Pennsylvania, Wisconsin, California, and Caracas, Venezuela, along with a bunch of time in France. (That’s because my husband is French.) I’ve loved each place. Right now I live in Southern California.

The Someday Birds (HarperCollins 2017), is about Charlie, a bird-loving boy on a life-changing journey across the country to see his injured dad. Charlie’s stuck in an old camper with his annoying siblings and a mysterious stranger at the wheel.

CLICK HERE to watch a short trailer about The Someday Birds

Stanley Will Probably Be Fine Stanley’s a comics trivia fanatic who grapples with anxiety. But he’s bravely entered Trivia Quest — a giant comics-trivia treasure hunt — to prove he can tackle his worries, score VIP passes to a big comic fest, and win back his ex–best friend. Along the way, he invents an imaginary superhero to help him cope.

CLICK HERE for a short trailer you can watch, about Stanley!

Benji, The Bad Day, & Me (Lee and Low 2018) is a new picture book about sibling rivalry, brotherly love, and neurodiversity, all wrapped up in a big blue blanket. Illustrations by the great Ken Min.
– Starred Review, Booklist
– Bank Street Best Book of 2019

Sally is available to meet with book clubs via NovelNetwork.com. Educators, consider inviting Sally for a free 30 minute video chat visit or an extended in-person visit with your students! View Sally’s calendar and schedule your visit here.