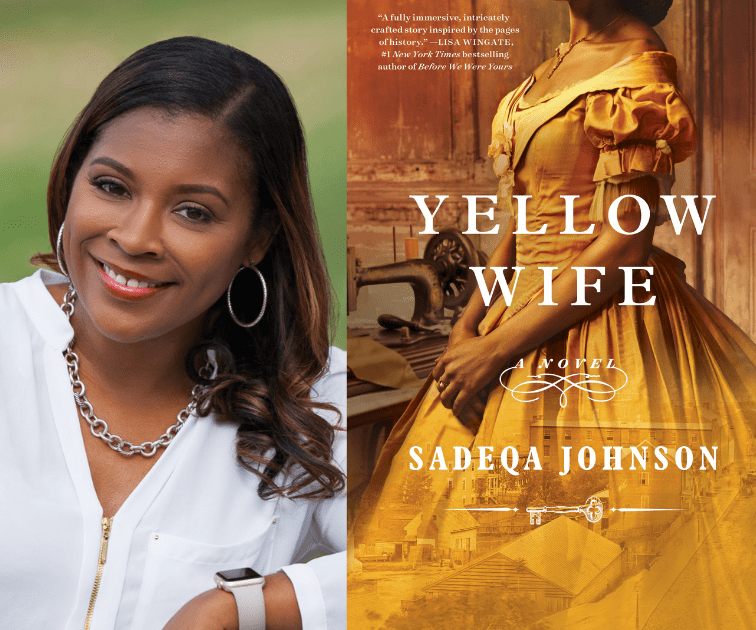 Sadeqa Johnson, a former public relations manager, spent several years working with well-known authors such as JK Rowling, Bebe Moore Campbell, Amy Tan and Bishop TD Jakes before becoming an author herself. Her debut novel, Love in a Carry-on Bag, is the recipient of the 2013 Phillis Wheatley award for best fiction, OOSA best book award, and USA best book award for African-American fiction. Second House From the Corner, was hailed by Essence magazine and a Go on Girl! Bookclub selection for 2017. And Then There Was Me, won the National Book Club Conference fiction book of the year award, and was a finalist for the Phillis Wheatley award. She has also received the Black Pearl Magazine Author of the Year award for 2017.

Johnson is a Kimbilo Fellow, former board member of the James River Writers, and proud member of the Tall Poppy Writers. She also teaches fiction writing for the MFA program at Drexel University. Originally from Philadelphia, she currently lives near Richmond, Virginia with her amazingly supportive husband of 18 years, and their three beautiful children.

Born on a plantation in Charles City Virginia, Pheby Delores Brown, has lived a privileged life. Shielded by her mother’s position as the plantation’s medicine woman, and cherished by the Master’s sister, she is set apart from the others on the plantation, belonging to neither world.

Freedom on her 18th birthday has been promised to her, but instead of the idyllic life she imagined with her true love, Essex Henry, Pheby is forced to leave the only home she has ever known and unexpectedly finds herself thrust into the bowels of slavery at the infamous “Devil’s Half-Acre,” a jail where the enslaved are broken, tortured, and sold every day in Richmond, Virginia. There Pheby is exposed not just to her Jailor’s cruelty but also to his contradictions. To survive Pheby will have to outwit him but soon faces the ultimate sacrifice.

PRAISE AND RECOGNITION FOR YELLOW WIFE:

*An O, the Oprah Magazine and SheReads, Most Anticipated Historical Fiction Books of 2021 Pick

*A PARADE and BuzzFeed Books We Love Pick

“Seldom do I get to enjoy a novel so wholly engrossing, so exquisitely researched, so timely. Sadeqa Johnson has brought a fresh telling to a story we think we already know, making it beautifully relatable and human. Riveting and suspenseful, I highly recommend this novel.”–Kathleen Grissom New York Times Best selling author of Glory Over Everything and The Kitchen House

“A challenging read but beautifully told… Yellow Wife doesn’t pull any punches in telling its story about this painful period in American history. However, with a central character who is more than up to the task, this thought-provoking, well-paced tale brims with heart and intelligence.”–NPR

“As Americans continue to deal with issues of race today, “Yellow Wife” is the perfect book to help the country see, in part, how it got here.”–Christian Science Monitor

“Yellow Wife is a heartbreaking stunner of a book. Johnson deftly creates a cast of characters based on real historical figures and events that transport the reader to the horrors of the slave trade of the pre-war South. Exquisitely researched and richly crafted. I was utterly riveted.” — Aimie K. Runyan, internationally bestselling author of Daughters of the Night Sky and Across the Winding River

“A fully immersive, intricately crafted story inspired by the pages of history. In Pheby, Sadeqa Johnson has created a woman whose struggle to survive and to protect the ones she loves will have readers turning the pages as fast as their fingers can fly. Simply enthralling.” – Lisa Wingate, #1 New York Times Bestselling Author of Before We Were Yoursand The Book of Lost Friends.

“Yellow Wife by Sadeqa Johnson is a page-turner of a novel that is utterly transporting. Johnson’s rich historical detail and enchanting prose sucked me into another world from the very first page. The book is a reminder that the inner lives of black women are as complicated as they are fascinating and make for some of the most affecting literature in American history. I loved it.” -Attica Locke, author of Bluebird, Bluebird

“Johnson is unsparing in her depiction of the physical, psychological, and spiritual damages wrought by slavery and realistic in her portrayal of the heroism of Pheby and others in resisting it — they cannot change the world, but they do what they can, and sometimes that’s extraordinary… [an] ultimately moving story anchored by a complex narrator.” —Kirkus, Starred Review

“This well-researched and intensely moving [novel]…is perfect for fans of historical fiction with strong female characters such as The Kitchen House by Kathleen Grissom and Wench by Dolen Perkins-Valdez. Book clubs looking for #OwnVoices authors will be powerfully impressed by this story of a lesser-known aspect of the history of slavery in the American South.” —Library Journal, Starred Review

“Johnson achieves a powerful, unflinching account of determination in the face of oppression.”–Publishers Weekly

“[A]n absorbing story. A deeply researched and truly transfixing narrative told with heart, soul and skill — one that will no doubt grip the reader as much as it did the author.”–Toronto Star

“Johnson writes with imagery so vivid that it’s impossible to look away, even during gut-wrenching moments. Readers will be engulfed in captivating suspense…” —BOOKLIST

Schedule your author visit with Sadeqa Johnson via NovelNetwork.