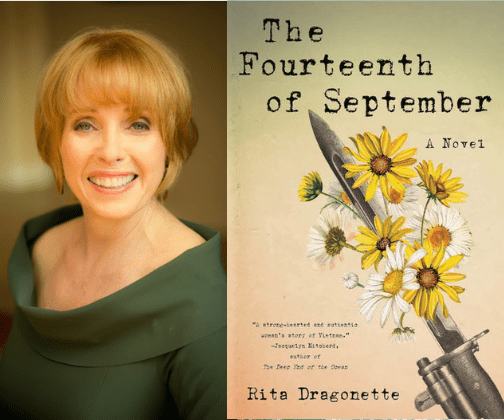 Rita Dragonette is a writer who, after spending nearly thirty years telling the stories of others as an award-winning public relations executive, has returned to her original creative path. The Fourteenth of September, her debut novel from She Writes Press, is based upon her personal experiences on campus during the Vietnam War. It has received the Best Book Award for Historical Fiction (finalist 2019) and Women’s Fiction (finalist 2019), National Indie Excellence Awards for New Fiction (2019) and Best Cover Design (2019), Beverly Hills Book Award for Women’s Fiction (2018), American Book Fest Fiction Awards for Literary Fiction (finalist 2018) and Best Cover Design (finalist 2018) and the Hollywood Book Festival (honorable mention 2018, general fiction). She is currently at work on three other books: an homage to The Sun Also Rises about expats chasing their last dream in San Miguel de Allende, a World War II novel based upon her interest in the impact of war on and through women, and a memoir in essays. She lives and writes in Chicago, where she also hosts literary salons to showcase authors and their new books to avid readers.

ABOUT THE FOURTEENTH OF SEPTEMBER:

An enthralling historical novel set during the peak of the Vietnam War and told through the rare perspective of a young woman, who traces her path to self-discovery and a “Coming of Conscience.” Perfect for fans of Kate Quinn and Heather Morris.

On September 14, 1969, Private First Class Judy Talton celebrates her nineteenth birthday by secretly joining the campus anti-Vietnam War movement. In doing so, she jeopardizes both the army scholarship that will secure her future and her relationship with her military family. But Judy’s doubts have escalated with the travesties of the war. Who is she if she stays in the army? What is she if she leaves?

When the first date pulled in the Draft Lottery turns up as her birthday, she realizes that if she were a man, she’d have been Number One―off to Vietnam with an under-fire life expectancy of six seconds. The stakes become clear, propelling her toward a life-altering choice as fateful as that of any draftee.

Judy’s story speaks to the poignant clash of young adulthood, early feminism, and war, offering an ageless inquiry into the domestic politics of protest when the world stops making sense.

PRAISE AND RECOGNITION FOR THE FOURTEENTH OF SEPTEMBER:

“The ebb and flow between a nineteen-year-old’s mistakes, vulnerability, and surprising moments of insight ring achingly true. The Fourteenth of September is a moving tribute to lives altered by chance. The draft lottery and its rippling effects highlight a generation that came into adulthood amid devastating uncertainty.”―Foreword Clarion Reviews, 4 our of 5 stars

“An often fresh take on the collegiate anti-war movement in small-town America.”―Kirkus Reviews

“ . . . beautifully written with compassionate and thoughtful narrative and engaging characters who play out all the angst of the era set on a Midwestern college campus when America was at its most vulnerable. Dragonette show us what we can be, both in our best and our worst.”―Windy City Reviews

“Offering a new and unique perspective of the politically divisive Vietnam War here in America, “The Fourteenth of September” is a deftly written and thoroughly absorbing read from beginning to end.”―Midwest Book Review

“It’s been said that in the anti-war movement of the 1970s, the men stormed the barricades and the women made the coffee. Rita Dragonette has written a strong-hearted and authentic novel about a naive young girl and her struggle to reconcile the dissonance between the world she sees and the world she was raised to believe in. Judy is truly a quiet hero; you won’t forget her.”―Jacquelyn Mitchard, author of The Deep End of the Ocean and Two if By Sea

“Few books have taken the time―and space―to examine so thoroughly the collegiate antiwar movement in small-town America . . . The tone rang true in every line.”―VVA Books

“ . . . a moving book on this time in history from a rarely heard point of view.”―Historical Novel Society

“Rita Dragonette’s novel, The Fourteenth of September, reveals what I have known for a long while―that she is a writer of great talent and integrity who infuses this debut work with an energy and vision that lifts it far beyond the ordinary coming of age story. This is an important book, not to be missed.”―Gary D. Wilson, author of Getting Right and Sing, Ronnie Blue

“The Fourteenth of September is a compelling, original book and a great read. It’s at once transporting to an incredible moment in recent history―the anti-Vietnam era of 1969-1970―and still distinctly modern, telling the story of a young woman finding her independence, her voice, and her place in the world. The author puts us squarely inside the head of Judy from the first page, and it is an unpredictable, emotional, and gripping ride through the end. The more you read, the more complex and interesting each character becomes, evolving from a gaggle of seemingly typical college students to a collection of fully-formed, deeply human, and truly unique individuals. This is a terrific book for anyone who enjoys American history, women’s lit . . . or simply a great story.”―Josh Lohrius, author of The Breaking of Goody Boothe

“In The Fourteenth of September, Rita Dragonette transports readers to a college campus in the late ’60s where youth across America questioned the status quo and flunking out meant front lines. When Judy intentionally crosses the Tune Room in her faded jeans, she isn’t merely joining those who claim to rebel against authority for the collective good. Her journey represents the complexity of every generation’s timeless effort to align conscience with action. Dragonette’s debut novel, neither idealistic nor fatalistic, offers the unique perspective of a young woman facing her own private rebellion.”―Elizabeth Wheeler, author of The Asher Trilogy

“Set in the months before and after the 1969 Draft Lottery, Rita Dragonette’s The Fourteenth of September tells the powerful story of Judy Talton, a young woman who must decide whether to risk her military nursing scholarship to protest the Vietnam War, which she has become convinced is morally wrong. Dragonette brilliantly depicts how the urgency of political commitment complicates the self-absorption of adolescence and the intense bonds of family, friendship, and love―often with devastating consequences. This is not only a novel for those of us who look back and marvel at the profound decisions we were called upon to make when we were so young, but for a whole new generation facing the crucial questions of a turbulent, changing world that will define them.”―Barbara Shoup, author of Looking for Jack Kerouac, An American Tune, Night Watch, Faithful Women, Wish You Were Here, Vermeer’s Daughter, Stranded in Harmony, and Everything You Want

“Rita Dragonette’s debut novel gracefully and magnificently arcs the full distance between the deeply personal and the global. In its depiction of a seminal point in the history of our country―the deep divide over the Vietnam War that provided the backdrop for the seismic shift at the end of 1960s―her story paints a sharp portrayal of a place and time, while artfully tackling questions of universal significance: At what point must we find our own voice and speak up? How do we determine what is meaningful action and what is not? And how to we measure the need to act versus a personal cost to ourselves? In a novel that gathers momentum with each page, Rita Dragonette has given us a work of recent historical fiction with profound relevance for today.”―Barbara Monier, author of You, In Your Green Shirt and A Little Birdie Told Me

“Meet Judy Talton, college student during some of the worst moments of the 1960s. Torn between her duty to country and her anti-war friends, between her family and her desire to make her own way, Judy embodies every conflict of that tumultuous era. Long after you finish the last page of this beautiful, tautly written novel, Judy Talton will echo in your memory.”―Peter Golden, author of Nothing Is Forgotten

“This debut novel deftly captures a generation on the cusp of an uncertain future. The characters choices are difficult, their solutions complex. At times charming and funny, at others intense and heartbreaking, Dragonette depicts a complicated chapter in our history with precision and depth, and renders it with compassion, understanding, and grace.”―Patricia Ann McNair, author of And These Are the Good Times

“This deeply felt novel took me back to the time when hopes of the future slammed up against the realities of war, and when the fate of young men was determined by a number in the Draft Lottery. It’s a re-immersion for some, for others a book to learn what all the fuss was about.”―Patrick T. Reardon, author of Requiem for David

“A compelling novel about the Vietnam era with a morbid similarity to events in today’s world. A coming-of-age story of students, their loves and fears, and the polarization of political thinking. A wonderful read for those who remember, as well as younger people who will identify with the unrest.“―Ellis Goodman, author of Bear Any Burden and The Keller Papers

“The struggles around integrity and the coming of age narrative of “Judy Blue Eyes,” the protagonist in Dragonette’s well-structured and versed story, though they represent that of a generation during the Vietnam era, are very relevant to what we face today.”―Jian Ping, author of Mulberry Child

“She walks a tightrope between betrayal and commitment so well that we as readers almost forget who she really is.”―BookTrib

Author visits with Rita Dragonette are available via NovelNetwork.com.