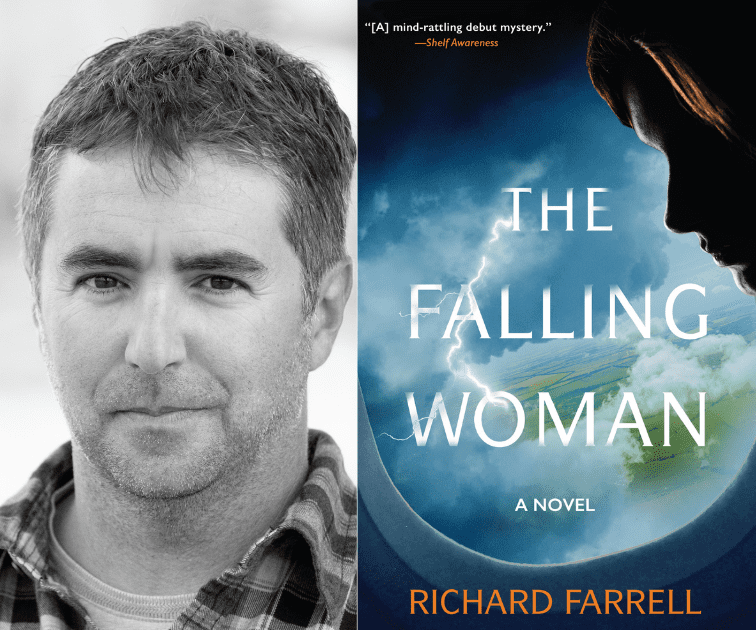 Richard Farrell is a graduate of the U.S. Naval Academy and the MFA in Writing Program at Vermont College of Fine Arts. His work, including fiction, memoir, essays, interviews and book reviews, has appeared or is forthcoming in The Forge, Potomac Review, Hunger Mountain, New Plains Review, upstreet, Descant, Contrary, Newfound, Numéro Cinq, and elsewhere. He teaches creative writing at Grossmont College and at San Diego Writers, Ink. His first novel, The Falling Woman, is now available in paperback from Algonquin Books.

ABOUT THE FALLING WOMAN:

Erin Geraghty has reached a breaking point in her cancer treatment. She believes that she is essentially already dead to all who know her–her husband, her full-grown daughters, and the ex-lover from her office. Facing a third round of treatment, she decides to take a week off from doctors and hospitals and even her family, and to fly from her home in Washington, DC, to a retreat in California. When the plane she is on encounters extreme turbulence over Kansas and comes apart in midair, she accepts the reality of the fact that this will be her real death. But fate has other ideas, for she miraculously survives not only the explosion but also the fall from the sky.

Charlie Radford is a young National Transportation Safety Board investigator who is part of the team sent to determine what caused the crash, and also to find and identify the bodies of the fallen. When, several days into his investigation, he hears a rumor that a woman was found alive in a barn, still strapped to her airline seat, he assumes it is a hoax. As word of this “miracle” has reaches the media–as well as the men and women in Congress–young Radford is forced to assume responsibility for tracking down the source of the rumor and to find the woman, should she actually exist. Once he does he must convince her to come forward. The problem is that Erin refuses to cooperate. All she wants is to be left alone to live out what time she has left, away from the rest of the world. But when one reporter gets wind of her location, Radford must decide how to protect this “falling woman” while at the same time answering the commands of his superiors in the government agency.

Fast-paced and full of twists and surprises, The Falling Woman is a story of the irony of fate, and of which conflicting factor will prevail: the need of the government and its people to know the truth, or the right of a woman to determine how her personal story will play out.

PRAISE AND RECOGNITION FOR THE FALLING WOMAN:

“[A] mind-rattling debut mystery . . . Page after page, Farrell builds confusion and frustration into an incendiary debate between belief in the miraculous and the basic laws of physics . . . When he finally discovers the truth, what Charlie does with it will make for an explosive discussion long after the final chapter.”—Shelf Awareness for Readers

“An intriguing story given weight by its examination of what it means to be faithful.”—Booklist

“The Falling Woman is a thoughtful, intelligent, and meticulously crafted novel about expectations and choices, tragedies and miracles, limitations and freedom. I enjoyed every page; it is a gem.”—T. Greenwood, author of Keeping Lucy

“A stunning debut, The Falling Woman kept me riveted to the very last page. Without sacrificing an ounce of suspense, Farrell manages to ask the big questions about life and love. This is a novel that is perfect for book clubs.”  —Thomas Christopher Greene, author of The Perfect Liar and The Headmaster’s Wife

“The Falling Woman is the kind of novel I like best: a page-turning glimpse into a world I have always been curious about (an investigation of a commercial airline accident) combined with great writing, great plotting and a thoughtful plumbing of what makes us human—with a twist at the end. Highly recommended.”—B.A. Shapiro, author of The Collector’s Apprentice

“What would you do if you were confronted with a miracle? That is the essential question posed in The Falling Woman, a surprisingly spiritual novel about a plane crash. Two people entwined in the investigation, both in desperate need of hope—and a true home—grapple with an answer, which may prove as perilous as the catastrophe. Part mystery and part prayer, this page-turner about mortality is iridescent. I loved it.” —Robin Oliveira, author of Winter Sisters

Author visits with Richard Farrell are available via NovelNetwork.com.