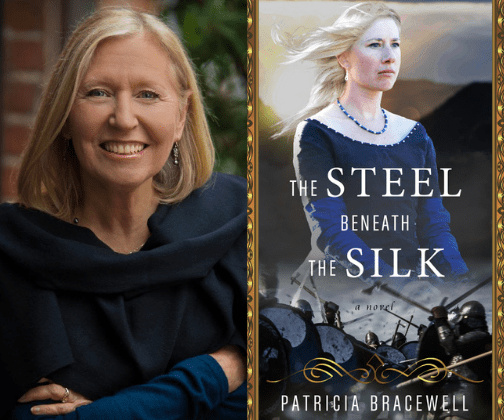 Patricia Bracewell taught literature and composition before embarking upon her writing career. A lifelong fascination with British history and a chance, on-line reference to an unfamiliar English queen led to years of research, a summer history course at Downing College, Cambridge, and the penning of SHADOW ON THE CROWN and THE PRICE OF BLOOD, the first two books in her trilogy about the 11th century queen of England, Emma of Normandy. As writer-in-residence at Gladstone’s Library in Wales, Patricia conducted research for the final book of her trilogy, THE STEEL BENEATH THE SILK, to be published in March, 2021. She lives with her husband in Northern California.

I was born and raised in Los Angeles and spent much of my childhood curled up on a sofa with my nose in a book. Usually it was a novel set in England, although why someone who grew up amid Southern California’s dry hills and sunshine would be so drawn to stories set in England’s wet, green dales is still a mystery, but there it is. We’re often drawn to what we don’t have, I suppose.

In college I majored in English Literature, but my university experience was, of course, not just about classroom study. I performed in several campus theater productions, worked part-time in a bookstore and sang with a small band in a local bar – a varied career in the space of a few years. I spent my final undergraduate semester in Switzerland and followed that with several months of travel, last stop Great Britain, where I paid homage to the places I’d been imagining for years: Dickens’ London, Austen’s Bath, Wordsworth’s Lake District, Joyce’s Dublin.

Then it was back to California and graduate school where I earned a Masters Degree and a California teacher’s credential. I taught high school English after that, and I still believe that introducing students to the basics of expository writing, to Shakespeare’s plays, and to the concepts of theme, irony and tone in literary fiction as well as being a friend, advisor and authority figure is one of the most challenging and rewarding careers that anyone could have.

Eventually I left Los Angeles for the greener landscape of the San Francisco Bay Area, where I met and married a charming Canadian. Together we raised our two sons, who are now busily forging lives and careers of their own.

In the midst of family life, though, I was actively studying the process of writing fiction – something my college courses had not really addressed. Studying literature and creating it, I had observed, were two very different things. I read books, I attended classes and workshops, I wrote short stories – a genre which seemed to demand a more morose outlook on life than I was willing to cultivate. I published a number of essays and articles, but still I was drawn towards the genre that had attracted me from the moment I picked up Black Beauty at age seven. I wanted to write a novel, in spite of the massive odds against my success, and so I set to work.

Then one day (this is the Once Upon a Time part) I came across an English queen whose name was completely unfamiliar to me. Intrigued, I began to research – more journeys to England and to France — and then I began to write the novel that would be published in 2013 as Shadow on the Crown. It is the first book in a trilogy, and the sequel, The Price of Blood, was released in 2015. In 2014 I was honored to serve as Writer in Residence at Gladstone’s Library in Wales where I took part in the library’s Hearth Literary Festival. I have been a panelist at writing conferences in the U.S. and the U.K., and have spoken to numerous book groups and school groups about my novels and the research behind them. The Steel Beneath the Silk, the final novel of the Emma of Normandy Trilogy releases March 2, 2021. It seems I’ve come full circle – my mind in England somewhere, wandering an ancient, green, Anglo-Saxon landscape while I sit here in California with my nose planted firmly in a book–only now, it’s the one I’m writing.

ABOUT THE STEEL BENEATH THE SILK:

A breathtaking conclusion to Bracewell’s Emma of Normandy Trilogy, brimming with treachery, heartache, tenderness and passion as the English queen confronts ambitious and traitorous councilors, invading armies and the Danish king’s power-hungry concubine.

In the year 1012 England’s Norman-born Queen Emma has been ten years wed to an aging, ruthless, haunted King Æthelred. The marriage is a bitterly unhappy one, between a queen who seeks to create her own sphere of influence within the court and a suspicious king who eyes her efforts with hostility and resentment. But royal discord shifts to grudging alliance when Cnut of Denmark, with the secret collusion of his English concubine Elgiva, invades England at the head of a massive viking army. Amid the chaos of war, Emma must outwit a fierce enemy whose goal is conquest and outmaneuver the cunning Elgiva, who threatens all those whom Emma loves.

PRAISE AND RECOGNITION FOR THE STEEL BENEATH THE SILK:

“The Steel Beneath the Silk is a power anthem tribute to history’s women-behind-the-scenes. Intelligent, observant Queen Emma might have very little authority as the ignored wife of England’s failing king, but she takes her role as peace-weaver seriously as Danish warlords threaten everything she has helped build. Without her hand on the tiller guiding the machinations of rebellious princes, ambitious concubines, and Viking suitors, it might have been a very different Britain–and a very different world. Patricia Bracewell’s impeccable research and steely heroine make this a perfect read for fans of Bernard Cornwell’s Last Kingdom series!” – Kate Quinn, author of The Rose Code, The Huntress, The Alice Network, The Empress of Rome Saga and The Borgia Chronicles

“A magnificent book! This masterful culmination of Patricia Bracewell’s epic Emma of Normandy trilogy could rival any Norse saga immortalizing the drama-laden events at the time of the Viking invasions of Anglo-Saxon England. I loved it!” – Anne Easter Smith, author of A Rose for the Crown and This Son of York

“The Steel Beneath the Silk is a triumph. As her husband King Æthelred and his sons confront the invading Danes on the battlefield, we watch Queen Emma wield power behind the scenes, forging alliances with cunning and diplomacy. Romantic, thrilling, richly embroidered with historical detail, this epic saga will satisfy fans of The Last Kingdom, Vikings, and Outlander. Highly recommended!” – Candace Robb, bestselling author of the Owen Archer mysteries

“The hard-hitting history of the Anglo-Saxon Chronicle comes to life in this sweeping, cinematic saga of Emma of Normandy. In a violent, turbulent world full of treachery and the threat of Viking invasion, one strong woman rises to seize her power with a warrior’s valor and a peace-weaver’s foresight. In Patricia Bracewell’s stunning new novel, Queen Emma makes an unforgettable impression.” – Mary Sharratt, author of Revelations and Illuminations

“Plotting, deceit and familial divisions keep the reader guessing what fate has in store for eleventh century Queen Emma and her sons. The Steel Beneath the Silk is a gripping and fabulous, vividly written story. The detailed scents, sounds and visual period detail pull the reader right into an English eleventh century court threatened with intrigue. This excellently recreated world provides an authentic background to a thrilling story. What a wonderful and dangerous life Queen Emma lived. England, 1013–Strife, Danish conquest, a handsome, clever Viking prince, betrayal; what a thrilling tale this is, one inhabited by vivid, unforgettable characters.” – Carol McGrath, author of The Handfasted Wife

“A queen’s courage in the face of war, lost love, and betrayal takes center stage in this novel about Emma of Normandy, a woman whose critical role in English history is not as well known as it should be. I felt like I was plunged into the 11th century, thanks to the action-fueled pacing and sharply conveyed atmosphere. Anyone who enjoys Vikings and The Last Kingdom and is eager to read about the lives of women in such a tumultuous era should seize this book and prepare for an unforgettable saga.” – Nancy Bilyeau, author of The Blue and the Joanna Stafford trilogy

“In this glorious conclusion to Bracewell’s Emma of Normandy trilogy, Emma becomes an even greater, wiser, savvier queen than ever she was in the two previous novels…. A perfect conclusion to a brilliant trilogy-a great read!” – Historical Novel Review

Author visits with Patricia Bracewell are available via NovelNetwork.com.