Our Perfect Wild: Ray & Barbara Bane’s Journeys and the Fate of Far North by Kaylene Johnson-Sullivan 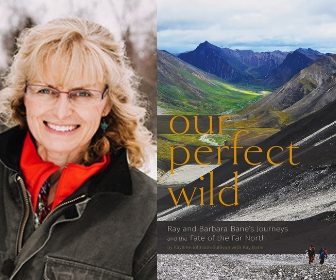 Ray and Barbara Bane worked as teachers in Barrow and Wainwright, Alaska, in the early 1960s—but they didn’t simply teach the children of their Iñupiat Eskimo and Koyukon friends and neighbors: they fully embraced their lifestyle. Doing so, they realized how closely intertwined life in the region was with the land, and, specifically, how critical wilderness was to the ancient traditions and wisdom that undergirded the Native way of life. That slow realization came to a head during a 1,200-mile dogsled trip from Hughes to Barrow in 1974—a trip that led them to give up teaching in favor of working, through the National Park Service, to preserve Alaska’s wilderness.

This book tells their story, a tale of dedication and tireless labor in the face of suspicion, resistance, and even violence. At a time when Alaska’s natural bounty remains under threat, Our Perfect Wild shows us an example of the commitment—and love—that will be required to preserve it.

“With her characteristic poise and brevity, distinguished Alaskan journalist Kaylene Johnson chronicles the Banes’ story of environmental gumption in the wilderness. . . . As her narrative gallops into environmental controversies, it shines with Johnson’s insight and intelligence.”(Molly Peacock, author of The Paper Garden)

“I have crossed the Bane’s path many times in the Arctic but only briefly met Ray once. My only endeavor was to walk, ski, or boat between points A&B. They were idealistic and were very instrumental in saving vast areas of the Arctic for future generations. They were often stymied by dissenters and the political process but in the end were successful. Thanks to Kaylene for writing a difficult book. People who travel in wilderness areas living in a tent have a tendency to write reams of stuff, stuff they don’t know what to do with. Kaylene did the extracting of the pertinent material into a great book.” — Richard (Dick) Griffith

Kaylene Johnson Sullivan is available to visit with book clubs (virtual and in-person) via NovelNetwork.com. View her calendar and schedule your visit here.