Oil and Marble by Stephanie Storey 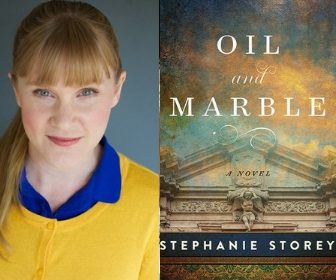 ABOUT OIL AND MARBLE:

In her brilliant debut, Storey brings early 16th-century Florence alive, entering with extraordinary empathy into the minds and souls of two Renaissance masters, creating a stunning art history thriller. From 1501 to 1505, Leonardo da Vinci and Michelangelo Buonarroti both lived and worked in Florence. Leonardo was a charming, handsome fifty year-old at the peak of his career. Michelangelo was a temperamental sculptor in his mid-twenties, desperate to make a name for himself.

Michelangelo is a virtual unknown when he returns to Florence and wins the commission to carve what will become one of the most famous sculptures of all time: David. Even though his impoverished family shuns him for being an artist, he is desperate to support them. Living at the foot of his misshapen block of marble, Michelangelo struggles until the stone finally begins to speak. Working against an impossible deadline, he begins his feverish carving.

Meanwhile, Leonardo’s life is falling apart: he loses the hoped-for David commission; he can’t seem to finish any project; he is obsessed with his ungainly flying machine; he almost dies in war; his engineering designs disastrously fail; and he is haunted by a woman he has seen in the market–a merchant’s wife, whom he is finally commissioned to paint. Her name is Lisa, and she becomes his muse.

Leonardo despises Michelangelo for his youth and lack of sophistication. Michelangelo both loathes and worships Leonardo’s genius.

Oil and Marble is the story of their nearly forgotten rivalry. Purchase your copy here.

Stephanie Storey’s debut novel Oil and Marble was hailed as “tremendously entertaining” by The New York Times, was named one of Hudson Booksellers’ Best Books of 2016, is a Los Angeles Times and #1 Amazon bestseller, and is currently in development as a feature film by Pioneer Pictures. Her newest novel, Raphael, Painter in Rome, is due out in April 2020 in conjunction with the 500th anniversary of Raphael’s death (April 1520).

Stephanie has a degree in Fine Arts from Vanderbilt University and attended a PhD program in Art History—before leaving to get her MFA in Creative Writing from Emerson College. She has studied art in Italy and been on a pilgrimage to see every Michelangelo on display in Europe. She has also been a national television producer for nearly twenty years in Los Angeles for shows including Alec Baldwin on ABC, Arsenio Hall for CBS, and Emmy-nominated The Writers’ Room for Sundance Channel. When not writing novels or producing television, she can usually be found — with her husband, an actor and Emmy-winning comedy writer — traveling the world in search of her next story.

PRAISE FOR OIL AND MARBLE:

“Tremendously entertaining and unapologetic in its artistic license, Oil and Marble will remind an older generation of the pleasures of Irving Stone’s art historical fiction.”
–Maxwell Carter, The New York Times

“The artistic process can be one of self-doubt, struggle, and sheer physical exertion, and Storey depicts the drama here with truth and insight. A rewarding read for art aficionados and fans of historical fiction.”– Booklist

“Vividly evoking the turbulent world and ferociously competitive spirit of Renaissance Florence, Stephanie Storey transports the reader to one of the most creative and exciting moments in the history of that remarkable city.”–William E. Wallace, author of Michelangelo: The Artist, the Man and His Times

“With every chip of the chisel and stroke of the brush, Stephanie Storey fashions a mesmerizing tale of the envy, ambition, and artistic genius that drove an epic rivalry. Oil and Marble will make readers long for Florence and to see David in the morning light.”–Elizabeth Cobbs, author of Broken Promises: A Civil War Novel, and The Hamilton Affair

“In the end this book is as much a love story as it is an historical narrative of time and place. Leonardo’s love for the muse Lisa and Michelangelo’s loving obsession to create something of great beauty from a block of imperfect stone. Stephanie Storey perfectly describes this artistic love as she paints her own masterpiece in the character of Leonardo.” — Thomas Crowe, Smoky Mountain News

Stephanie Storey is available to visit with book clubs via NovelNetwork.com.