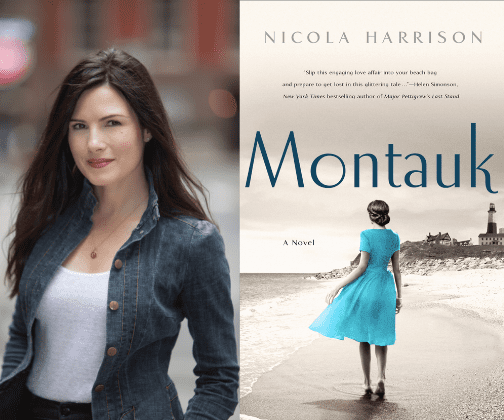 Originally from Hampshire, England, Nicola Harrison moved to California when she was 14. She studied Literature at UCLA and received an MFA in creative writing at Stony Brook University. She is a member of The Writers Room and has short stories published in The Southampton Review and Glimmer Train as well as articles in Los Angeles Magazine and Orange Coast Magazine. She was the fashion and style staff writer for Forbes and had a weekly column at Lucky Magazine. Nicola is also the founder of a personal styling business, Harrison Style. She has spent many summers in Montauk and currently lives in Manhattan with her husband, two sons and two chihuahuas. Montauk her first novel. She is working on her second novel, The Show Girl, St. Martin’s Press (August 10, 2021)

Montauk, Long Island, 1938. For three months, this humble fishing village will serve as the playground for New York City’s wealthy elite. Beatrice Bordeaux was looking forward to a summer of reigniting the passion between her and her husband, Harry. Instead, tasked with furthering his investment interest in Montauk as a resort destination, she learns she’ll be spending twelve weeks sequestered with the high society wives at The Montauk Manor—a two-hundred room seaside hotel—while Harry pursues other interests in the city.

College educated, but raised a modest country girl in Pennsylvania, Bea has never felt fully comfortable among these privileged women, whose days are devoted not to their children but to leisure activities and charities that seemingly benefit no one but themselves. She longs to be a mother herself, as well as a loving wife, but after five years of marriage she remains childless while Harry is increasingly remote and distracted. Despite lavish parties at the Manor and the Yacht Club, Bea is lost and lonely and befriends the manor’s laundress whose work ethic and family life stir memories of who she once was.

As she drifts further from the society women and their preoccupations and closer toward Montauk’s natural beauty and community spirit, Bea finds herself drawn to a man nothing like her husband –stoic, plain spoken and enigmatic. Inspiring a strength and courage she had almost forgotten, his presence forces her to face a haunting tragedy of her past and question her future.

Desperate to embrace moments of happiness, no matter how fleeting, she soon discovers that such moments may be all she has, when fates conspire to tear her world apart…

PRAISE AND RECOGNITION FOR MONTAUK:

“A great beach read with just the right amount of suspense to keep the reader rooting for Beatrice and all she holds dear.” – Booklist

“Refreshing as an Aperol spritz, Beatrice’s pursuit of autonomy and her own happiness is a welcome addition to some waterside R&R this summer. ” – Vogue, What Vogue Editors Are Reading on the Beach This Year

“This engaging debut novel deftly explores the tensions between the life we want and the life we have chosen.” – Working Mother, The 20 Most Anticipated Books of Summer 2019

“Glittering galas, lavish living, and the spoils of hedonism crash against the lush, wild, primitive beauty of an Atlantic Coastal fishing village, creating a perfect storm. Caught between the two worlds, one woman must discover who she truly is, even if it means losing everything in the process. Montauk is a stunning debut by a gifted storyteller.” – Erika Robuck, national bestselling author of Hemingway’s Girl

“Nicola Harrison offers a rich and decadent peek into the glamorous―and not so glamorous―lives of pre-war Manhattan society. Beautifully written with an expert eye for historical detail, Montauk is both love story and social commentary, but at its heart it’s the thought-provoking story of a woman with the courage to find her voice and inner strength. Heartbreaking and heartwarming, Montauk is a lovely book, meant to be savored.” – Karen White, New York Times bestselling author

“You don’t have to go to Montauk to enjoy the beach. In this lovely debut novel, Nicola Harrison brings the beach to you, along with its people, its mores, and its contradictions. I so enjoyed Montauk, and I look forward to many more novels by Nicola Harrison.” – Lisa See, New York Times bestselling author of Snow Flower and the Secret Fan

“As seductive as Downton Abbey, with the glamour of Gatsby and the soul of Virginia Woolf, Montauk is a spectacular debut.” – Jennifer Belle, bestselling author of High Maintenance and The Seven Year Bitch

“Slip this engaging love affair into your beach bag and prepare to get lost in this glittering tale of love, betrayal and social climbing in a newly fashionable 1930s seaside village.” – Helen Simonson, author ofThe Summer Before The War and Major Pettigrew’s Last Stand

Author visits with Nicola Harrison are available via NovelNetwork.com.