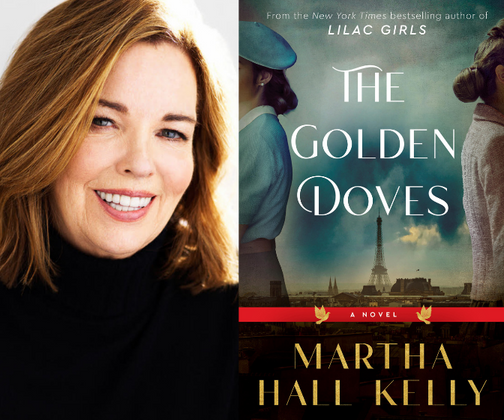 Martha Hall Kelly’s debut novel Lilac Girls, became a New York Times bestseller the week it was published in 2016 and then went on to sell over two million copies and publish in 50 countries. The novel is based on the true story of 72 Polish women who were imprisoned and experimented on at Ravensbruck Concentration Camp and how Caroline Ferriday, an American philanthropist brought them to the U.S. for rehabilitation and the trip of a lifetime.

Her latest novel, The Golden Doves, which returns to WWII, arrives in bookstores April 18th, 2023.

Martha grew up in Massachusetts and now splits her time between Connecticut and New York City.

ABOUT THE GOLDEN DOVES:

Two former female spies, bound together by their past, risk everything to hunt down an infamous Nazi doctor in the aftermath of World War II—an extraordinary novel inspired by true events from the New York Times bestselling author of Lilac Girls

American Josie Anderson and Parisian Arlette LaRue are thrilled to be working in the French resistance, stealing so many Nazi secrets that they become known as the Golden Doves, renowned across France and hunted by the Gestapo. Their courage will cost them everything. When they are finally arrested and taken to the Ravensbrück concentration camp, along with their loved ones, a reclusive Nazi doctor does unspeakable things to Josie’s mother, a celebrated Jewish singer who joined her daughter in Paris when the world seemed bright. And Arlette’s son is stolen from her, never to be seen again.

A decade later the Doves fall headlong into a dangerous dual mission: Josie is working for U.S. Army intelligence and accepts an assignment to hunt down the infamous doctor, while a mysterious man tells Arlette he may have found her son. The Golden Doves embark on a quest across Europe and ultimately to French Guiana, discovering a web of terrible secrets, and must put themselves in grave danger to finally secure justice and protect the ones they love.

Martha Hall Kelly has garnered acclaim for her stunning combination of empathy and research into the stories of women throughout history and for exploring the terrors of Ravensbrück. With The Golden Doves, she has crafted an unforgettable story about the fates of Nazi fugitives in the wake of World War II—and the unsung females spies who risked it all to bring them to justice.

PRAISE AND RECOGNITION FOR THE GOLDEN DOVES:

“A compelling story that spans the horrors of World War II to the Cold War of the early 1950s . . . Martha Hall Kelly deftly illuminates little-known complexities of the post-war while painting a vivid portrait of the deep scars and trauma that Holocaust survivors carried. Readers will be equally captivated and educated by this original and thought-provoking book.”—Pam Jenoff, New York Times bestselling author of Code Name Sapphire

“A pulse-pounding tale of vengeance, grief, mystery, and family, The Golden Doves will keep you on the edge of your seat.”—Kristin Harmel, New York Times bestselling author of The Forest of Vanishing Stars

“Martha Hall Kelly returns to the era of World War II and delivers with the passion for assiduous research and complex storytelling that millions of fans have come to expect and love from her. The Golden Doves is breathtaking—both in the beauty of its language and the twists of its high-stakes plot.”—Allison Pataki, New York Times bestselling author of The Magnificent Lives of Marjorie Post

“Meticulously researched, breathtakingly told. Add this page-turner to the canon of female freedom fighters to whom we owe so much and who would go unrecognized were it not for authors like Kelly.”—Alka Joshi,New York Timesbestselling author of The Henna Artist

“From the riveting beginning to the breathtaking end, The Golden Doves is a thrilling and wild journey you won’t soon forget. Meticulously researched, hauntingly told and inspired by real events that span generations and continents, The Golden Doves is a page-turner with a passionate beating heart.”—Patti Callahan Henry, The New York Times bestselling author of The Secret Book of Flora Lea

“I loved Martha Hall Kelly’s The Golden Doves . . . it’s the riveting story of two brave and amazing women, Josie Anderson and Arlette LaRue, best friends who work in the French Resistance during World War II. The Golden Doves is a triumph!”—Lisa Scottoline, The New York Times bestselling author of Eternal

“While reading The Golden Doves, I gasped aloud more times than I can count . . . and you will, too! With ingenious precision, Martha Hall Kelly sets her sights on two symbiotic characters, American Josie and Parisian Arlette . . . the duo reunites after the war to embark on the most significant assignment of their lives—a mission for justice and healing.”—Sarah McCoy, New York Times bestselling author of Mustique Island and The Baker’s Daughter

“At the heart of Martha Hall Kelly’s sensational new page turner, The Golden Doves, are two unforgettable women . . . The fascinating choreography of their top secret missions, the depths of their personal sacrifice, their love of freedom and their commitment to defeat the Third Reich makes this a must-read for all readers who love history.”—Adriana Trigiani, New York Times bestselling author of The Good Left Undone

Author visits with Martha Hall Kelly are available via NovelNetwork.com.