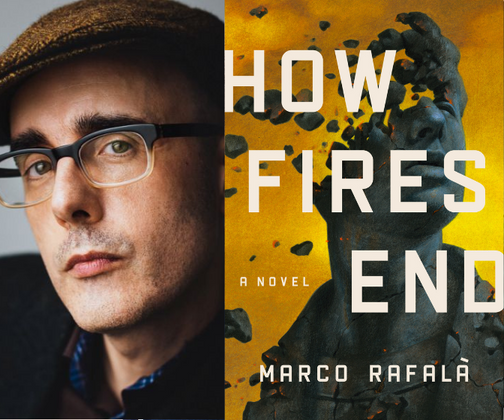 Marco Rafalà is a first-generation Sicilian American novelist and writer for tabletop role-playing games. He earned his MFA in Fiction from The New School and is a cocurator of the Guerrilla Lit Reading Series in New York City. Born in Middletown, Connecticut, he now lives in Brooklyn, New York and Melilli, Sicily. His fiction and non-fiction have appeared in the Bellevue Literary Review, Literary Hub, and Italian America magazine. His debut novel, How Fires End, was a 2020 Connecticut Book Awards finalist and honorable mention and won the 2021 Italian American Studies Association Book Award.

A dark secret born out of World War II lies at the heart of a Sicilian American family in this emotional and sweeping saga of guilt, revenge, and, ultimately, redemption.​

After soldiers vacate the Sicilian hillside town of Melilli in the summer of 1943, the locals celebrate, giving thanks to their patron saint, Sebastian. Amid the revelry, all it takes is one fateful moment for the destiny of nine-year-old Salvatore Vassallo to change forever. When his twin brothers are killed playing with an unexploded mortar shell, Salvatore’s faith is destroyed. As the family unravels, and fear ignites among their neighbors that the Vassallo name is cursed, one tragedy begets another.

Desperate to escape this haunting legacy, Salvatore accepts the help of an Italian soldier with fascist ties who ushers him and his sister, Nella, into a new beginning in America. In Middletown, Connecticut, in the immigrant neighborhood known as Little Melilli, these three struggle to build new lives for themselves. But a dangerous choice to keep their secrets hidden erupts in violence decades later. When Salvatore loses his inquisitive American-born son, David, they all learn too late the price sons pay for their fathers’ wars.

Written with elegiac prose, How Fires End delves into the secret wars of men; the sins they cannot bury; and a life lived in fear of who will reveal them, who will survive them, and who will forgive them.

“Rafalà seems to love language as much as his characters love their farms and their patron saint. That’s a powerful combination, and it fuels a compelling novel.” —New York Journal of Books

“Marco Rafalà rouses us to applause with How Fires End…[T]he ‘immigrant novel’ has a smart and resourceful new proponent.” —Brooklyn Rail

“Marco Rafalà had this story in his bones. A moving family drama that takes plenty of risks.” —Writer’s Bone

“Absolutely breathtaking…a poignant reminder of the part history plays in all our lives.” —Cultured Vultures

“[A] quintessential Italian American tale that excites us for what more may come from an author who is bound to be an established literary voice of the ‘80s generation.” —Primo Magazine