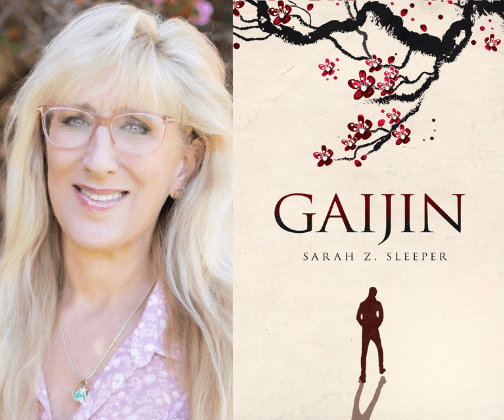 My novel Gaijin is set on a small speck of a Japanese island in the East China Sea, a tiny pinpoint on the world map. The book is a cauldron of my experiences while living on the island of Okinawa, including emotional reactions and geographic and political facts—all set within a fictional storyline. It could be considered historical fiction because it’s full of researched data, especially from World War II, but it’s also a contemporary story that could happen to an American living there today.

Compared to the rest of Japan, Okinawa looks like a dot in the ocean to the east of the huge country of China. It has a population of 1.4 million and is 66 miles long and seven miles wide, much smaller than mainland Japan. It’s a popular tourist spot with beautiful beaches, subtropical forests and cultural sites. In addition to natural splendor, Okinawa’s economy is also driven by fishing, pineapple, cattle and sugar. And though it’s small, Okinawa has outsized importance for the United States and Japan, as well as for the rest of the world. And that, as much as its geography, was a crucial element of my novel.

I learned much about Okinawa when I lived there in the mid-1990s, working as a reporter for a Japanese magazine and as an editor for the American Chamber of Commerce. During four years I often felt like a gaijin, an unwanted foreigner. I had many pleasant and rewarding moments—dragon boat racing with local teachers, and writing about community events—but I also had some unfriendly and even scary moments too—one teenager tried to kick me off my bike as I rode by, for instance. It was a fascinating place to live and work.
Years later, when I finally made the commitment to write about it, I set the story in modern-day Okinawa so that it would appeal to readers of contemporary fiction. As I wrote the book, I researched to update my knowledge. Sadly, I was not able to travel back to Japan to enhance my reseach, but thankfully, so much is available on the internet that I found all I needed. I documented all my data sources with publication dates, websites, books and so on, and included them in the notes of the published book. My work is fiction, but it’s set within an authentic sociological, political and geographical context, on an island with a rich and compelling story itself.

Before Okinawa was part of Japan, it was the independent Ryukyu Kingdom, with ties to both China and Japan. It was conquered by Japan in 1879 and its inhabitants were forced to become Japanese citizens, a situation that some Okinawans resented then, and still resent. The more affluent mainlanders, likewise, do not always accept the Okinawans as “fully” Japanese. When I was there I became aware of such discrimination and perhaps one of the reaons it took some years to set the story there was because of Okinawa’s complex sociological situation. The material needed to stew in my brain for a while before I could put in on paper.

Of course, Okinawa’s most well-know political circumstance has colored its history since the middle of the 20th Century—its strategic military importance to the United States. It was the site of one of the bloodiest campaigns in the Pacific during WWII. In April 1945, U.S. troops invaded the island and eventually established complete control. They’ve been a huge presence and influence there ever since then. It wasn’t until 1972 that the United States returned Okinawa to Japan and today, some 17% of the island is still occupied by U.S. military bases. Some Okinawans resent United States’s presence and take to the streets to protest. When I was there, such protests were a daily occurrence and they still are today. At times, the Japanese government has agreed to reduce U.S. military presence in Okinawa, but no change has happened. Okinawan activist groups have sprung up to help push for that outcome. It’s a critical fact both to my book and to the island’s history that over the past sixty years there have been hundreds of crimes allegedly committed by American military personnel against Okinawans and that many have gone undocumented.

So my book springs from reality, and there are parts that highlight the beauty and elegance of Okinawa, but it also features the gritty travails of a young American woman navigating a foreign country. The protagonist of Gaijin is not me, but she goes through some of what I went through when I was there—the joy of learning a new culture, the strangeness of being “other,” and the growing understanding of the myriad complexities of her new home. Okinawa is small but it’s a mighty and evocative setting for a powerful story.

Tips for Writers…
1. Before choosing another country as a setting, it’s best to research and fully document the key facts about the place—demographics, geography, economics, political history. Keep all data in an organized database with clear citations.
2. Read the news! Writers must understand both the past and the present about their chosen location. Nothing undercuts the credibility of a story more than getting a current or historical data point wrong.
3. Research other fiction and nonfiction set in the chosen place. It’s important to be familiar with literature about the area, as well as with those who write about it.
4. Stay consistent with point of view. If the story is told in first-person from an American character, avoid writing narrative that comes from the perspective of a local. Of course, this is true for any fiction. But it’s critical when cultural sensitivity might be a factor.

Sarah Z. Sleeper is an ex-journalist with an MFA in creative writing. This is her first novel. Her short story, “A Few Innocuous Lines,” won an award from Writer’s Digest. Her non-fction essay, “On Getting Vivian,” was published in The Shanghai Literary Review. Her poetry was published in A Year in Ink, San Diego Poetry Annual and Painters & Poets, and exhibited at the Bellarmine Museum. In the recent past she was an editor at New Rivers Press, and editor-in-chief of the literary journal Mason’s Road. She completed her MFA at Fairfeld University in 2012. Prior to that she had a twenty-five-year career as a business writer and technology reporter and won three journalism awards and a fellowship at the National Press Foundation.

Sarah Sleeper is available to visit with book clubs via NovelNetwork.