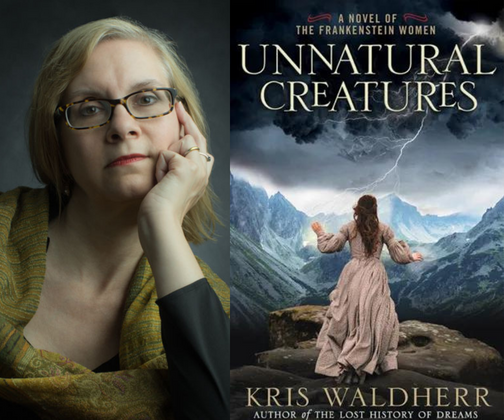 Kris Waldherr writes books that explore the hidden stories of women’s lives. Her newest novel is Unnatural Creatures, a sweeping reimagining of Mary Shelley’s Frankenstein told through the eyes of the three women closest to Victor Frankenstein: his mother Caroline, bride Elizabeth, and servant Justine. Unnatural Creatures was named an Editor’s Choice by the Historical Novels Review, who praised it as “Worthy of comparison to Jean Rhys’s Wide Sargasso Sea . . . a splendid achievement from a writer at the height of her powers.” Kris’s debut novel The Lost History of Dreams was a Victorian-set gothic inspired by the myth of Orpheus and Eurydice. It received a Kirkus star and was a CrimeReads Best Book of the Year. On the nonfiction side, Kris is the author of Doomed Queens: Royal Women Who Met Bad Ends and The Book of Goddesses, a One Spirit/Book of the Month Club bestseller. She began her publishing career writing, illustrating, and designing books for children.

Kris lives and works in Brooklyn in a Victorian-era house with her family and a noisy Bengal cat and a stealthy Ragdoll. In her free time, she adores travel and is currently learning French for her next historical novel.

For the first time, the untold story of the three women closest to Victor Frankenstein is revealed in a dark and sweeping reimagining of Frankenstein by the acclaimed author of The Lost History of Dreams and Doomed Queens.

THE MOTHER. Caroline Frankenstein will do anything to protect her family against the nightmarish revolutions engulfing 18th-century Europe. In doing so, she creates her own monster in the form of her scientist son, Victor.

THE BRIDE. Rescued by Caroline as a four-year-old beggar, Elizabeth Lavenza knows the only way she can repay the Frankensteins is by accepting Victor’s hand in marriage. But when Elizabeth’s heart yearns for someone else, the lives of those she most loves collide with the unnatural creature born of Victor’s profane experiments.

THE SERVANT. After an abusive childhood, Justine Moritz is taken in by Caroline to serve the Frankensteins. Justine’s devotion to Caroline and Elizabeth knows no bounds . . . until a tragedy changes her irrevocably. Her fate sets her against Victor’s monster, who is desperate to wreak revenge against the Frankensteins.

PRAISE AND RECOGNITION FOR UNNATURAL CREATURES:

“Worthy of comparison to Jean Rhys’s Wide Sargasso Sea, in Unnatural Creatures, Kris Waldherr moves the lens of the Frankenstein story away from Victor and his infamous monster in favor of the women in his life, and in doing so adds to the myth in a rich, satisfying, and multi-layered tale. . . . Literary but also an engaging page-turning read, Unnatural Creatures is a splendid achievement from a writer at the height of her powers.”–Historical Novels Review (Editors’ Choice)

“Following the lives of the women in Victor’s life, this book puts a refreshing spin on the original Gothic tale, rounding out the backstory of Frankenstein’s monster with insights. . . The eerie atmosphere hearkens back to Frankenstein‘s groundbreaking Gothic genre and tone, and the historical setting, which is full of political and social strife, is as immersive and real as it is moody. . . This book has it all. Unnatural Creatures is an atmospheric, reimagined classic about the lines we cross for loyalty and love.”–Foreword Reviews

﻿﻿“A masterful Gothic rendering . . . With its heartbreaking plot twists and stark sense of impending doom, Mary Shelley herself would be deeply moved by this dark tale of revenge and redemption.”-Stephanie Marie Thornton, USA Today bestselling author of And They Called It Camelot

“A brilliant and feminist companion to a classic. Kris Waldherr’s electrifying novel brings the women in Victor Frankenstein’s life to the foreground, reminding us that the most interesting stories are often the ones that go untold.”-Megan Collins, author of The Family Plot

﻿﻿﻿“Lushly atmospheric and rich with historical authenticity, Unnatural Creatures is a riveting Gothic tale that I devoured in one sitting. . . An inspired reimagining that was impossible to put down.” -Mimi Matthews, USA Today bestselling author of The Siren of Sussex

“In Unnatural Creatures, Kris Waldherr deftly uses the political climate of late 18th-century Geneva to add depth and nuance to one of literature’s best-known stories of one man’s folly, but it is her choice of protagonists-the three women closest to Victor Frankenstein-that truly elevates her work . . . A richly atmospheric work of Gothic wonder.”-Molly Greeley, author of The Heiress: The Revelations of Anne de Bough and The Clergyman’s Wife

“This is the feminist reimagining of Frankenstein you didn’t know you needed.”-Clarissa Harwood, author of The Curse of Morton Abbey and Impossible Saints

“Waldherr’s latest is a rich feast for fans of the gothic novel.”-Libbie Grant, bestselling author of The Prophet’s Wife

“Elegantly written and inspired, Waldherr’s latest is a sensuous and empathetic look at the three women who knew Victor Frankenstein best. Fans of the original will find much to love in this fresh imagining of the classic tale. A veritable tour de force!”-Paulette Kennedy, author of Parting the Veil

“Sheds new light on one of literature’s most famous stories in an atmospheric novel, which contrasts the unnatural act of Frankenstein’s monster’s animation with the maternal act of creation.”-Finola Austin, author of Bronte’s Mistress

“This is a book that will seep into your bones and chill your heart in the best possible way; Mary Shelley would be proud.”-Hester Fox, author of A Lullaby for Witches

Author visits with Kris Waldherr are available via NovelNetwork.com.