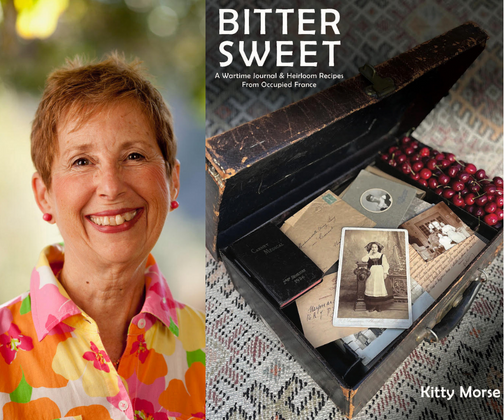 Kitty Morse was born in Casablanca of a French mother and British father, and came to the United States in 1964 to attend college.  She is the author of nine cookbooks, including a memoir with recipes titled Mint Tea and Minarets: a banquet of Moroccan memories, named Best Book/Arab Cuisine by the Gourmand World Cookbook Awards. The book centers around Dar Zitoun, her family riad (Moorish mansion) 50 miles south of Casablanca. Kitty translated the book into French with the title Le Riad au Bord de l’Oued (2019). Both books are downloadable as eBooks on Amazon.com. Other titles include Cooking at the Kasbah: Recipes from my Moroccan Kitchen (now in its tenth printing from Chronicle Books), The California Farm Cookbook, and Edible Flowers: A Kitchen Companion with Recipes.

Kitty’s career as an author, travel writer, cooking teacher, and tour organizer spans more than twenty-five years. Once a food columnist for the Los Angeles Times, Kitty has written for most major food publications including Fine Cooking, Sunset, and Bon Appetit. She hosted 2 television series of her own, and has appeared on national television in the US and abroad.

She has been a guest lecturer and presenter at venues in California and beyond: from the Los Angeles Public Library, to the City of Chicago, the Smithsonian Institution in Washington DC, cooking schools, museums, and universities. She taught Moroccan cuisine at the famed Rancho La Puerta Spa in Tecate, Mexico, for several years. Her monthly enewsletter, The Kasbah Chronicles, is now in its thirteenth year.

PUBLIC SPEAKER: Kitty has been a guest on public radio, and has been interviewed twice on the BBC’s The World. In 2003, she participated in The Book and the Cook event in Philadelphia (PA). She has been a featured presenter for the Chicago Culinarians, the Los Angeles Times Festival of Books, the City of Chicago, the California Farm Conference, the convention of the International Association of Culinary Professionals, Kraft Foods USA, the famed Golden Door Spa (Escondido, CA), and, on three occasions at the Ahwahnee Hotel’s annual Chef’s Holiday in Yosemite National Park, as well as many other venues. In 1992 and 1999, she gave seminars on North African cuisine and culture at the Smithsonian Institution in Washington, D.C.

TELEVISION: Kitty has appeared on Sarah’s Secrets, hosted by Sarah Moulton of the Food TV channel, all national affiliates in San Diego (CA), as well as Morocco’s national television and Baja California’s (Mexico) Canal Azteca. She presented her book, A Biblical Feast, on the QVC shopping channel. Her two part series, Fresh from the Farm, which she produced and hosted in 1994, still airs on cable channels in San Diego County. For over a year, she held a regular spot on California Heartland, a weekly, statewide series focusing on California’s agriculture.

PRINT MEDIA: Once a weekly contributor to the Los Angeles Times, Kitty is today  a staff writer for WineDineandTravel, award-winning online magazine.  One of Kitty’s menus was featured in the January 2002 issue of Bon Appetit magazine, under the heading, Moroccan Cuisine: Cuisine of the Year. Her recipes have been featured in the New York Times, the Washington Post, the Chicago Tribune, the San Jose Mercury News, the San Diego Union Tribune, Sunset (as one of The Best Chefs of the West), Fine Cooking, Cooking Pleasures, Pillsbury’s Fast and Healthy, Aramco World, Gastronomica, Eating Well, and Cooking Light magazines.

ABOUT BITTER SWEET: A WARTIME JOURNAL AND HEIRLOOM RECIPES FROM OCCUPIED FRANCE

I’d never come across another suitcase quite like it. But what was the tattered black leather valise doing there, hidden behind a crocheted comforter on the top shelf of my late mother’s closet? The tarnished brass locking mechanism had already been sprung. I held my breath and lifted the lid…

The author’s first discovery was a vintage portrait of her great-grandmother Blanche in traditional Alsatian costume (Blanche, her daughter and son-in-law would die at Auschwitz in 1944.) Blanche’s photograph partially hid a tattered notebook, the journal of her husband, Prosper, chronicling the horrors of the Nazi occupation of Europe from April to December 1940. Included in the valise was a notebook written in Blanche’s hand, listing 160 heirloom recipes. For her 11th cookbook, part Holocaust history, part memoir, part cookbook, Kitty Morse translated these family documents into English, and adapted and tested over 60 of Blanche’s recipes for the American kitchen. Includes food photography and vintage images.

Schedule your author visit with Kitty Morse via NovelNetwork.