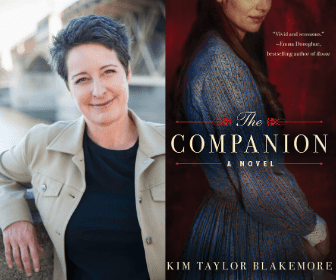 An Interview With Kim:

What do you enjoy about writing with the historical fiction genre?

I am drawn to women’s stories, which are sometimes found haphazardly, looking through letters or diaries in a historical society archive, and sometimes feel as though glimpsed through a doorway opened just a crack, a fleeting moment caught in time.  When I read histories of “big” events, I look for the particulars. I often wonder what was going on at home? What were the women up to? What were the particulars of their lives?  These are often found tucked in diaries and letters. In The Companion, I wanted to know what happened to a female charged with murder in 19th century New England – and then, of course, because I write historic suspense, I needed to write out how she got there in the first place.

The technological restrictions also set up lovely puzzles – what happens when you need to get in touch with someone immediately and there’s not a phone, not even a telegraph? No cars, no electricity, forensics at its beginning stages, hoop skirts and petticoats quite a detriment to running away, no video or recording devices, arsenic found on every household shelf – how difficult can murder be?

If you could go back in time to any historical period, at any place and be anyone, when would you choose, where would you be, and who would you be?

Elizabethan England to meet the Queen. I’ve wanted to meet Elizabeth I ever since I was a child. She is fierce and frightening and marvelous. Though I think I’d be quaking in my boots underneath forty pounds worth of skirts.

Do you feel that your historical novel, The Companion, could only be told in today’s day and age, before going on to become a timeless story?

Inherently, the story is about love and obsession, two very human traits. Greer Macallister (Woman 99) said it best in her early review of the book: “Love’s transforming power makes not just angels, but monsters.”  We’ve seen that theme played out before – Othello, Frankenstein when you get right down to it, Rebecca – and it’s timeless one. We humans have a thing for love and all its jealousies.

What’s the research process for historical fiction like? Do you find it to be endlessly enjoyable or painstakingly difficult?

I love research. I can’t even go on vacation without sussing out an area’s historical societies, monuments and museums and then adding that to the trip’s agenda.  I’m compelled to find out who came before and find the echoes of their voices.

It is a highlight to talk to reference librarians and archivist and researchers to learn specifics of a time and place. Rebecca Stockbridge, reference librarian at the New Hampshire State Library, was my rockstar during the writing of The Companion. She found amazing materials for me, including the annual prison reports for 1854-55 and the various warden’s notes on the “annoyance of keeping women” in the prison (the asylum was bandied as an option for the six female inmates). Brian Buford at the NH State Archive tracked down the original court papers for Letitia Blaisdell, a woman who had been found guilty of murder in 1849, including the jury’s final decision that she was guilty and would hang. (Her sentence was later commuted.)

I continually find inspiration for new stories, because every bit of ephemera comes to me with a what-if? attached…

Do you also find there are inherent limitations to writing historical fiction? (For instance, aliens from outer space couldn’t suddenly land on a Civil War battlefield in a historical novel). What are some of the less obvious limitations?

Oooh, an alien landing at Gettysburg. Hm. I think Connie Willis could make a cracking story from that! Seriously, the limitations are what I look for – the mores, the worldview, the milieu. I want to experience someone existing in their time rather than dropping a petticoat on a thoroughly modern woman and giving her free rein.

Your novel bears similarities to Burial Rites by Hannah Kent and Fingersmith by Sarah Waters. Are there any other authors or books that have been an influence to you in your writing, or books and authors you just enjoy reading?

Daphne DuMaurier. No doubt. She’s the master of the reveal, feeding one small bit of information at a time until all the pieces add up to a terrifying whole. And her settings are so vivid, characters in themselves. Emma Donoghue for the complexity and language. Laura Purcell for deception and deviousness. I recently read The Silent Companions, which literally scared me to the point I heard the damn things in my own house and had to stop reading at night! Thanks for the chill, Laura…and also thanks for that awesome not-at-all-expected ending. I enjoy a lot of styles of books – romances and adventures and crime. I’m really into Ruth Ware right now. I read a lot. 3-5 books a week. I come from a family of voracious readers, so I thank my mother and father for passing on that habit.

My experience with Lake Union has been wondrous. I’ve worked with other big five publishers, and Lake Union operates much the same as a traditional publisher, at least through the editorial and production process. I had an acquisitions editor who worked through two revisions of the book with me, then rounds of developmental edits, copy edits, line edits…all the while, the marketing team worked on taglines and blurbs and cover design. The area where they different is in the approaches to marketing because they’re, well, Amazon. They have a rather good handle on that.

I think the most rewarding part has been working with such knowledgeable and creative people, and the incredible support Amazon Publishing gives its authors. I feel really blessed to be part of this team and imprint. Lake Union is a class act.

﻿How did you find your current literary agent? And get your book published with Lake Union?

I had sent out queries to a group of agents whom I had researched and thought would be a good fit for the book. Most importantly, I was looking for a good fit for a writing career and having someone that wanted to work in the long term through multiple projects. I had both watched and read interviews with Mark Gottlieb, and then read more on Trident Media Group, and the scope of his knowledge and successful sales in both publishing and book-to-film really sold me on submitting my work to him. His turn-around was really fast – I received an email a couple days after he requested the full with questions about some elements in the book. We discussed those for a bit, and by Friday he’d offered representation.

Once I accepted, he immediately sent the manuscript to a few editors he thought would be interested in the book, including Alicia Clancy at Lake Union Publishing. She loved the book but had some ideas she wanted to run by me for changes prior to making an offer, so the three of us hopped on a call. Alicia walked me through ideas that were awesome and I wished I’d thought of! And we all thought – this is going to work out. I can’t even put into words how much her edits and advice deepened the story.

Do you have any advice for hopeful writers looking to become published authors?

Number 2: Give it a good edit and get feedback from honest writing colleagues.

Number 3: Trust the story and believe in it.

Number 4: Rejection is not personal. All you need is one yes.

Number 5: Pick up a pen and write another story.

What can we expect next from the writing desk of Kim Taylor Blakemore?

I’m really excited to be writing another historical suspense for Lake Union Publishing. Set in 1865 New Hampshire, it’s about a woman untangling the story of her sister’s commitment to an asylum and her apparent suicide. But she sees a different story in her sister’s broken body, and as she presses for answers, she finds enemies are closer than she imagined, and the truth that killed her sister might kill her, too. It’s due out in January 2021. I hope Daphne approves…