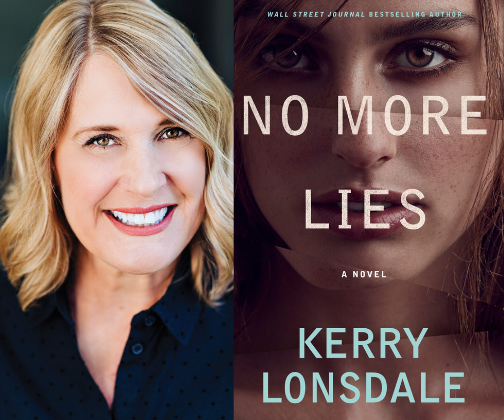 Kerry Lonsdale is a Wall Street Journal, Washington Post, Amazon Charts, and #1 Kindle bestselling author. She writes standalone and series based emotionally charged domestic drama that readers have described as “unputdownable” and “intricately plotted.” Summer afternoon soaps, nighttime thriller dramas, and the deliciously scandalous novels she kept hidden in her school backpack under a smashed half-eaten pb&j, fueled her brassy imagination. She’s been constructing tales since she could wield a #2 stick of lead. Packed with mystery, suspense, and romance, her stories appeal to a wide, international audience and have been translated into twenty-seven languages.

Co-founder of the Women’s Fiction Writers Association, Kerry is also a member of the International Thriller Writers. She is an Abdominal Aortic Dissection and subclavian aneurysm survivor, and due to this trauma, educating people on the importance of vascular health has become a passion of hers.

Kerry resides in Northern California with her husband and college-aged kids where she spends her mornings writing and afternoons herding cats, literally.  Her mind is twisted, but her heart is bright, and she loves her readers, so she created the perfect spot to hang out: the Tiki Lounge. She’d love for you to join her there.

ABOUT NO MORE LIES:

Jenna Mason’s life seems perfect: a successful career as an animator, a town house near the beach, and an adoring son, Josh, whose artistic talent looks as promising as his mother’s. But there’s something nobody realizes about Jenna. She used to be Lily Carson, a young mother on the run from a secret no one must ever know.

After years of constantly relocating, Jenna concedes to her son’s request to settle down. He wants to make friends. He wants some stability. He wants to feel normal. She convinces herself they’re safe. Until a reporter discovers who Jenna really is, bringing her estranged father to her doorstep. When he threatens to expose her carefully fabricated life for the lie that it is, Jenna has no choice but to run again.

But just as she’s about to go off the grid, Josh disappears, forcing Jenna to seek out the one person she never thought she’d see again: Josh’s father.

Author visits with Kerry Lonsdale are available via NovelNetwork.com.