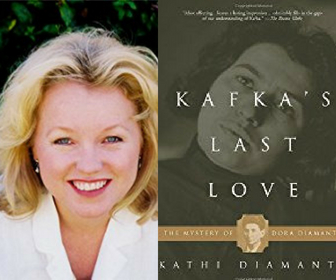 Here, for the first time, is the remarkable story of the woman who was
by the side of literary giant Franz Kafka at the end of his life, and
who was responsible for giving him the happiest year of his life.

In this gripping literary detective story, Kathi Diamant brings to light the amazing woman who captured Kafka’s heart and kept his literary flame alive for decades. It was Dora Diamant, an independent spirit who fled her Polish Hasidic family to pursue her Zionist dreams, who persuaded Kafka to leave his parents and live with her in Berlin the year before he died. Although many credit (or blame) her for burning many of his papers, as he had requested, she also held onto many others–papers that the Gestapo confiscated and that have yet to be recovered. Dora’s life after Kafka–from her days as a struggling agitprop actress in Berlin to her sojourn in Moscow in the 1930s, from her wartime escape to Great Britain, to her first emotional visit to the new nation of Israel–offers a prism through which we can view the cultural and political history of twentieth-century Europe.

Based on original sources and interviews, including never-before-seen
material from the Comintern and Gestapo archives and Dora’s newly
discovered notebook, diary, and letters, Kafka’s Last Love illuminates
the life of a literary “wife” who, like Véra Nabokov and Nora Joyce, is
a remarkable woman in her own right.

“…a surprisingly immediate biography … In this moving, detailed and fascinating biography, Kafka was a man who liked a laugh… This is not a biography that merely offers a different angle on the life of a great writer…on the contrary, Dora’s life is a remarkable one in itself, a reflection of some of the greatest, and worst, moments of the early 20th century… The death of Kafka was just the beginning of the story for Dora – and what an amazing story it is.” —– Sunday Herald, July 20, 2003 (Scotland)

“Little has been written about Dora as a person, and in this, the first biography, Kafka’s Last Love, Dora’s namesake, Kathi Diamant aims to set the record right. It is a remarkable tale, which crisscrosses Europe from Poland to Germany and from Austria to Russia, ending in England, where Dora spent her final years. …Kathi Diamant astutely combines printed and unpublished sources …to create a vivid and coherent account. … In telling her extraordinary tale, Kathi Diamant has written a clear and absorbing book, which provides a fitting monument to a remarkable woman.” —– Jeremy Adler in the Evening Standard, July 28, 2003 (London)

“Does half a year’s cohabitation justify a biography? If courage (amidst the Jews’ 1930s nightmare) and pathos are the measure, the answer is a resounding yes. What’s more, there is voluminous new material. …She is a good historian, presenting a concise and comprehensive summary of the deterioration of the Weimar currency in the 1920s Berlin…she illuminates a little-known and crucial time in Kafka’s life. Her book is deeply moving and will be of particular interest to students of Yiddishist groups in Berlin, London and Austria.” —– Brenda Maddox in Literary Review, August 2003 (London)

“Kathi Diamant (probably no relation) puts that right. In doing so she has performed many mizvoth, or good deeds: for Dora herself, for Kafka, and also for literary biography, because she has not only cast new light on a great writer, but written a good and moving book in its own right. This biography is almost too moving. …At the same time, Kafka’s Last Love is alive with vivid, contradictory humanity…. Diamant herself is a literary outsider, a former journalist who writes colourful, journalistic prose…her writing is clear and gripping, her research prodigious. With this book both she and her beloved Dora must surely emerge from the margins of Kafka scholarship.” —– Carole Angier in The Sunday Times of London, Aug 3, 2003

Kathi is available to meet with book clubs (virtual and in-person) via NovelNetwork.com. View Kathi’s calendar and schedule your visit here.