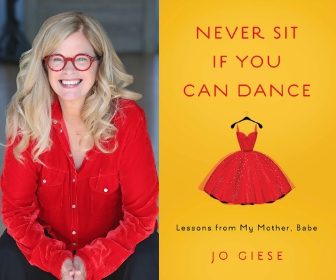 As a special correspondent Jo Giese was part of the Peabody award-winning team at Marketplace, public radio’s daily business show, and she’s been a contributor to This American Life.

She is a intrepid and enthusiastic world traveler, having visited more than 50 plus countries.  In the last ten years she’s traveled to India three times, China, Africa, Finland, and Vietnam twice, as well as Patagonia, Bhutan, New Zealand, Iceland, Brazil, Argentina, and Norway.

As a special correspondent Jo was part of the Peabody award-winning team at Marketplace, public radio’s daily business show.

Her series Breaking the Mold, which featured women succeeding in male-dominated fields,  ran for three years, and was their longest running series.  This series won a EMMA—Exceptional Merit Media Award–in 2002 for Exceptional Radio Story from the National Women’s Political Caucus.

For her “superior portrayal of the changing roles of women,” Jo received a GRACIE in 2001 from the Foundation of American Women in Radio and TV.

The multi-part series she reported at Marketplace included Checking In, How Much Is That Doggie in the Window?, Starting Over, Life on Fire!, and Reinventing Retirement.

For This American Life with Ira Glass, she contributed a half-hour documentary Doctoring the Doctor.  You can hear this intimate story of Jo caring for her husband in the last year of his life below (starts at 06:21), or read the transcript.#269: Someone to Watch over MeThis American Life

In New York City, Jo produced documentaries for PBS, WNET-TV, WNBC-TV, and was Food Editor for WNBC Nightly News.  She was also a host for SNC Cable, a consumer reporter for Group W, and a producer for the Family Channel.

Jo authored A Woman’s Path (Golden/St. Martin’s) and The Good Food Compendium (Doubleday) and is awaiting the publication of Never Sit If You Can Dance: Lessons from My Mother, Babe (She Writes Press/April 23, 2019). CLICK HERE to find out more. She’s begun working on her next book project: A Waterfall Junkie’s Wet Dream: Hiking to the Great Waterfalls of the World.

Jo writes regularly for Buzz: Houston where Mom’s Place was published. She was a columnist for Buzz: The Talk of Los Angeles.  Her writing has also been featured in ZinkZine, a literary online magazine.

She served on the board of PEN CENTER WEST.  She taught in the UCLA Extension Writing Program, and at the Skirball Lifelong Learning Center in Los Angeles.

As Founder and President of the MalibuGreenMachine she helped raise $750,000 for a landscaping project on Pacific Coast Highway in Malibu.

Previously, in the 90s, as part of the Venice Action Committee, she spearheaded a community effort to plant trees in Venice, California on Rose Avenue.  The mature trees, from Main Street to Lincoln Blvd, remain to this day.

She was honored by the Malibu Times as 2005 Citizen of the Year, and was honored in 2008 with a Malibu Way of Life Award.

…She lives in Southern California and Montana with her husband, Ed Warren.

PRAISE AND RECOGNITION FOR NEVER SIT IF YOU CAN DANCE:

“This engaging tribute should ring a bittersweet bell with many baby boomers whose aging parents are dying.”…-Kirkus Reviews

“Tender, pithy, and steeped in respect, Never Sit if You Can Dance is a light-filled biographical work.” –Karen Rigby, Foreword Reviews

“This book is a jewel. Never has a quirky mother-daughter memoir seemed so fresh and entertaining. Everyone will wish they’d had a mother named Babe.” -Carolyn See, Making A Literary Life.

Jo Giese is available to visit with book clubs via NovelNetwork.com. View her calendar and schedule your visit here.