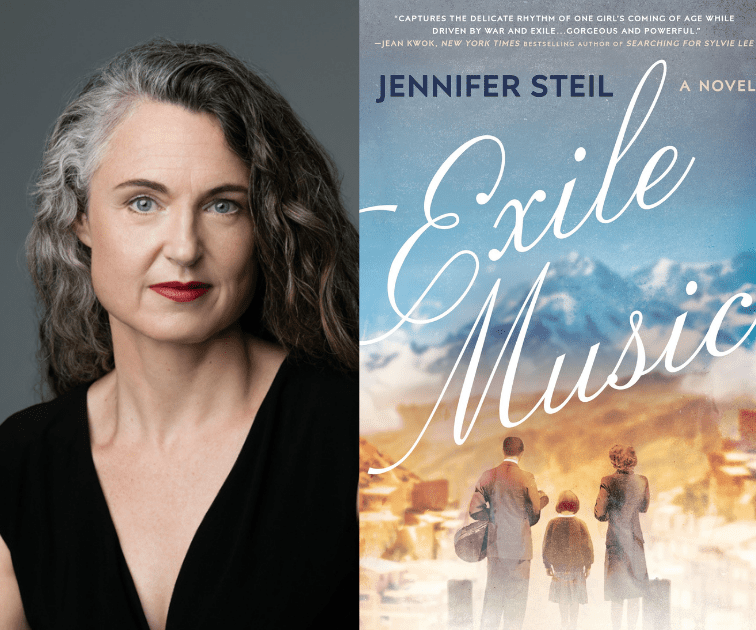 Jennifer Steil is an award-winning author and journalist who lives in many countries (currently Uzbekistan). Her third book, the novel Exile Music, released from Viking on May 5, 2020. It follows the lives of a family of Austrian Jewish musicians who seek refuge from the Nazis in Bolivia in 1938.

Her second novel, The Ambassador’s Wife, published by Doubleday in 2015, won the 2013 William Faulkner-William Wisdom Creative Writing Competition Best Novel award and the 2016 Phillip McMath Post Publication Book Award. The novel, which explores white savior complex, freedom of expression, art, terrorism, and parenthood, was shortlisted for both the Bisexual Book Award and the Lascaux Novel Award, and has received considerable critical acclaim, notably in the Seattle Times, Publishers Weekly, Booklist, and The New York Times Book Review. It has been published in several other languages, including Italian, Bulgarian, Greek, and Polish. The Mark Gordon Company optioned the film rights to The Ambassador’s Wife, with plans to create a television miniseries starring Oscar-winner Anne Hathaway.

Jennifer’s first book, The Woman Who Fell From the Sky (Broadway Books, 2010), a memoir about her tenure as editor of the Yemen Observer newspaper in Sana’a, received praise from The New York Times, Newsweek, and the Sydney Morning Herald. The Minneapolis Star-Tribune chose it as one of their best travel books of the year in 2010, and Elle magazine awarded it their Readers’ Prize. National Geographic Traveler included the book in their 2014 recommended reading list. It has been published in Australia, New Zealand, Germany, the Netherlands, Italy, Turkey, and Poland. A bisexual writer who has lived in Arabia and South America for nearly a decade, she is interested in transcultural issues, freedom of expression, and human rights.

Based on an unexplored slice of World War II history, Exile Music is the captivating story of a young Jewish girl whose family flees refined and urbane Vienna for safe harbor in the mountains of Bolivia.

As a young girl growing up in Vienna in the 1930s, Orly has an idyllic childhood filled with music. Her father plays the viola in the Philharmonic, her mother is a well-regarded opera singer, her beloved and charismatic older brother holds the neighborhood in his thrall, and most of her eccentric and wonderful extended family live nearby. Only vaguely aware of Hitler’s rise or how her Jewish heritage will define her family’s identity, Orly spends her days immersed in play with her best friend and upstairs neighbor, Anneliese. Together they dream up vivid and elaborate worlds, where they can escape the growing tensions around them.

But in 1938, Orly’s peaceful life is shattered when the Germans arrive. Her older brother flees Vienna first, and soon Orly, her father, and her mother procure refugee visas for La Paz, a city high up in the Bolivian Andes. Even as the number of Jewish refugees in the small community grows, her family is haunted by the music that can no longer be their livelihood, and by the family and friends they left behind. While Orly and her father find their footing in the mountains, Orly’s mother grows even more distant, harboring a secret that could put their family at risk again. Years pass, the war ends, and Orly must decide: Is the love and adventure she has found in La Paz what defines home, or is the pull of her past in Europe–and the piece of her heart she left with Anneliese–too strong to ignore?

PRAISE AND RECOGNITION FOR EXILE MUSIC:

“A beautiful coming-of-age tale… Moving, evocative, and well-researched, this is sure to linger in readers’ minds long after the last page has been turned.” —Booklist (starred)

“Beautifully narrated…From the very first pages I was swept up.”
—Georgia Hunter, New York Times bestselling author of We Were the Lucky Ones

“Out of this this little-known corner of history, Steil offers a beautiful meditation on the things we all hold dear – family, friendship, home. My Beautiful Friend meets The Pianist in this elegant symphony of a novel.”
—Ruth Gilligan, author of Nine Folds Makes a Paper Swan

“This riveting, elegantly rendered coming-of-age story sheds light on the community of Jewish refugees who found sanctuary in La Paz, Bolivia. With vivid historical details and unforgettable characters, Exile Music captures the heartbreak of exile, the painful scars of survival, and the redemptive power of art.”
—Amy Gottlieb, author of The Beautiful Possible

“A celebration of the redemptive power of love, art and music in the face of the cataclysms of history, this novel weaves a powerful spell. I fell in love with Orly, a keeper of secrets and stories, who holds her family together by force of will when it seems certain they will fray apart. In prose of vivid beauty and lyrical toughness, Steil illuminates the life of the émigré with moments of unexpected kindness, tension, tragedy and triumph.”
—Ariel Kahn, author of Raising Sparks

“Jennifer Steil has created a world that is as fierce and stunning as her exquisite language. She dares ask the question where do we belong – and forces the reader to question our own conceptions of what makes a home. Ultimately, this is a story of a woman searching for herself following unimaginable trauma.”
—Elizabeth L. Silver, author of The Execution of Noa P. Singleton

“Vienna, Austria and La Paz, Bolivia; war and peace; immediate love and mingled yearning; tangled desires sprung from single seeds—Exile Music is a magnificent exercise in connections among objects, ideas, and places that seem to have nothing in common, but do.”
—Beth Kephart, author of Strike the Empty and This is the Story of You

“Jennifer Steil is a conjurer of spells and a resurrector of lives past. In Exile Music she brings to life a little-known chapter of a war that came to define us, & which were still grappling w today. This beautiful book is at once timeless and topical. A great novel.”
—Daniel Torday, winner of the National Jewish Book Award for The Last Flight of Poxl West

Author visits with Jennifer Steil are available via NovelNetwork.com.