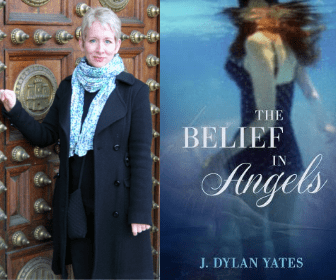 Raised on a tiny New England peninsula, J. Dylan Yates pursued her BFA from the University of Colorado-Boulder.

THE BELIEF IN ANGELS, Dylan’s debut novel, was written over the course of many years while she attempted a number of BFA related jobs, including: teaching, corporate training, real estate, nursing, interior design, parenting, and reluctant housewifery.

Dylan supports her writing habit working as an RN with the midwives at UCSD-San Diego’s Birthcenter, where she has found several correlations between natural childbirth and novel writing.

Her second novel, TASTE, the first in a series, introduces a young synesthete, Ari Niles, beginning her college experience at the New York University of the Arts. TASTE is a sexy, sensorially-stimulating, coming-out—coming of age story set in late 1970’s Greenwich Village.

AWARDS FOR THE BELIEF IN ANGELS:

​… for the YA Version- THE BELIEF IN Angels: Jules

PRAISE AND RECOGNITION FOR THE BELIEF IN ANGELS:

“… a gripping, heart-rending family saga that explores the darkest side of human nature— and the incontrovertible, uplifting power of hope, ​spans more than fifty years, from the Ukranian pogroms in the 1920’s to a chaotic Hippie Household in the late 1970’s. Vividly drawn and breathtakingly insightful, this story is a beautiful, heartbreaking exploration of human nature at its worst and its best.” –Publishers Weekly

“… Yates shows much skill in description, characterization, and dialogue, and she’s insightful about the mental state of abused children, as when Jules learns to compartmentalize: “I began to see my life in parts. When something bad, or weird, or crazy happened, like my father having a gun and threatening my mother, I’d say to myself: This is the part where my father points a gun at my mother’s head. Yates vividly evokes time and place, whether it’s Samuel’s childhood among the apple orchards in Ukraine, the bleakness of a Cape Cod tourist town in winter or Wendy’s psychedelic decorating style. Well-written.”  -Kirkus Reviews

Dylan Yates is available to visit with book clubs via NovelNetwork.com. View her calendar and schedule your visit here.