In the Aftermath by Jane Ward 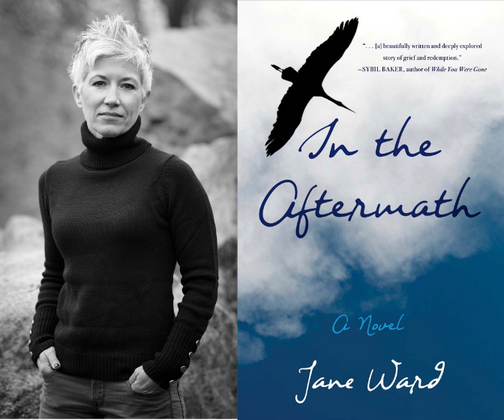 When David Herron—overwhelmed and despairing, his family’s business and finances in ruin due to the bursting lending bubble of 2008—takes his own life one chilly spring morning, he has no idea the ripple effect his decision will set into motion.

Two years later, his widow, Jules, is now an employee of the bakery she and David used to own—and still full of bitterness over David’s lies, perceived cowardice, and ultimate abandonment of her and their now-teenage daughter, Rennie. Rennie, meanwhile, struggles socially at school, resents her work-obsessed mother, and is convinced she’s to blame for her father’s death.

When Denise, the former police detective who worked (and, due to her own personal struggles at the time, mishandled) David’s case, catches sight of Rennie at her sons’ school, she’s struck by the girl’s halo of sadness—and becomes obsessed with attempting to right the wrongs she believes she perpetrated two years ago.

And as all this unfolds in Boston, Daniel, the guilt-ridden young man who, in his old life as a banker, helped create the circumstances that led to David’s suicide, continues to punish himself for his sins by living half a life, working odd jobs and bouncing from one US city to another, never staying long enough to make friends or build something lasting.

Ultimately, each of these very different people—all of them tied together by one tragic event—must learn in their own way how to say good-bye to the past and move into a brighter future.

“Ward masterfully builds a sense of dread with mundane details in the first section, and the way that she finds significance in moments of ordinary, everyday life is reminiscent of the work of Anne Tyler. This deeply empathetic novel deals sensitively with difficult subjects. . . . An insightful and psychologically astute story of ordinary people moving forward after personal tragedy.”—Kirkus Reviews

“In the Aftermath is a masterful novel in which a man’s suicide leaves indelible marks on those left behind.” —Foreword Clarion Reviews

“This is an absorbing book, and I cared about every character in it. . . . Jane Ward did an excellent job capturing the upheaval suicide has caused.” –Paula Mikrut, Windy City Reviews

“Jane Ward’s deeply resonant, beautifully written, and emotionally complex exploration of this tragedy’s fallout is riveting. . . . Less about suicide than it is about survival, In the Aftermath is a gripping testament to the need for policies that value human life and a vivid reminder that a kinder, more loving world is within our reach.”—Eleanor J. Bader, Rain Taxi Review of Books

Author visits with Jane Ward are available via NovelNetwork.com.