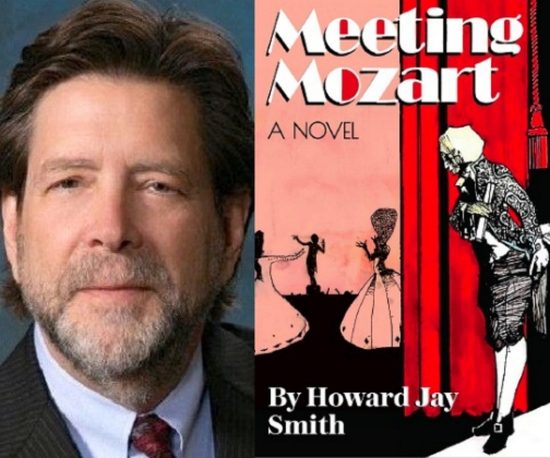 Howard Jay Smith is an award-winning writer from Santa Barbara, California.BEETHOVEN IN LOVE; OPUS 139 & MEETING MOZART: FROM THE SECRET DIARIES OF LORENZO DA PONTE are respectively his third and fourth books along with OPENING THE DOORS TO HOLLYWOOD (Random House) and JOHN GARDNER: AN INTERVIEW (New London Press). He was recently awarded a John E. Profant Foundation for the Arts, Literature Division Scholarship, The James Buckley Excellence in Writing Award. Smith is a former Bread Loaf Scholar & Washington, D.C. Commission for the Arts Fellow, who taught for many years in the UCLA Extension Writer’s Program and has lectured nationally. His articles and photographs have appeared in the Washington Post, the Beethoven Journal, Horizon, theJournal of the Writers Guild of America, the Ojai Quarterly, and numerous trade publications. While an executive at the ABC Television, Embassy TV, and Academy Home Entertainment he worked on numerous film television, radio and commercial projects. He serves on the board of directors of the Santa Barbara Symphony and is a member of the American Beethoven Society.

ABOUT MEETING MOZART: FROM THE SECRET DIARIES OF LORENZO DA PONTE:

“Meeting Mozart: From the Secret Diaries of Lorenzo Da Ponte” is “The musical equivalent of The Da Vinci Code….with a deeply satisfying ending.”–Patricia Morrisroe, journalist and author.  It’s a deftly plotted and richly detailed historical novel that spans generations and involves Mozart, mysteries, masquerades, opera, and spies. It brings to light the incredible life story of Mozart’s librettist, Lorenzo Da Ponte, the Jewish-born priest who created The Marriage of Figaro, Don Giovanni, and Cosi Fan Tutte. The novel opens in the shadows of a war-torn Jewish ghetto in Italy, with the discovery of Lorenzo Da Ponte’s secret diaries by his descendent, an opera-loving, Jewish/Italian-American G.I. stationed outside Venice. In the diaries, Da Ponte reveals how he had to live as a Converso in order to survive the anti-Semitism of his era. Over the course of a colorful lifetime, Da Ponte is a gambler, a poet, a womanizer, a murder suspect. He is a friend to Casanova, Mozart’s collaborator, and an insider at the Hapsburg Court of Vienna, and, eventually, an associate of such luminaries as James Fenimore Cooper and Henry Wadsworth Longfellow, who brings the first opera theater to NYC.     Order your copy here.

PRAISE AND RECOGNITION FOR MEETING MOZART: FROM THE SECRET DIARIES OF LORENZO DA PONTE:

“Ever since the release of Amadeus, the concept of writing historical fiction based on the golden age of classical music, has flourished… Frankly speaking, many of them are outstripped by this new riveting book. 5 out of 5 Stars”—CityBookReview.com
“A captivating, classical music-themed tale starring Mozart’s famous collaborator.” —Kirkus Reviews
“Meeting Mozart by Howard Jay Smith is a thrilling historical novel … This beautifully illustrated book is a gift from the award-winning author.” —OnlineBookClub.org
“Howard Jay Smith has written the musical equivalent of The Da Vinci Code.” —Patricia Morrisroe, author, The Woman in the Moonlight
“Smith writes with a wonderful command of language and a deep knowledge of history, music, and opera. An absolute delight to read.” —Nir Kabaretti, conductor of the Santa Barbara Symphony
“Meeting Mozart is a journey of transcendence, an exquisitely constructed novel crafted by a compelling storyteller.” —Alan Riche, producer of Duets, Mod Squad, Starsky & Hutch
“Smith vividly brings to life not only Da Ponte’s challenges in navigating the challenges of life for Jews but also those of his descendants.” —Gaelle Lehrer Kennedy, author, Night in Jerusalem