How Fires End by Marco Rafalà 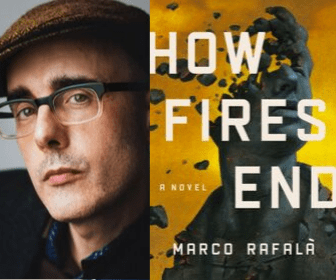 A dark secret born out of World War II lies at the heart of a Sicilian American family in this emotional and sweeping saga of guilt, revenge, and, ultimately, redemption.

After soldiers vacate the Sicilian hillside town of Melilli in the summer of 1943, the locals celebrate, giving thanks to their patron saint, Sebastian. Amid the revelry, all it takes is one fateful moment for the destiny of nine-year-old Salvatore Vassallo to change forever. When his twin brothers are killed playing with an unexploded mortar shell, Salvatore’s faith is destroyed. As the family unravels, and fear ignites among their neighbors that the Vassallo name is cursed, one tragedy begets another.

Desperate to escape this haunting legacy, Salvatore accepts the help of an Italian soldier with fascist ties who ushers him and his sister, Nella, into a new beginning in America. In Middletown, Connecticut, in the immigrant neighborhood known as Little Melilli, these three struggle to build new lives for themselves. But a dangerous choice to keep their secrets hidden erupts in violence decades later. When Salvatore loses his inquisitive American-born son, David, they all learn too late the price sons pay for their fathers’ wars.

Written with elegiac prose, How Fires End delves into the secret wars of men; the sins they cannot bury; and a life lived in fear of who will reveal them, who will survive them, and who will forgive them.

“How Fires End explores the complicated bind of family, attempting to answer the age-old question of where family history ends and the self begins. This is a beautiful meditation on time, memory, and consequences.” —Kaitlyn Greenidge, author of We Love You, Charlie Freeman

“What happens when the fires we nurture with hate die? How Fires End is a breathtaking multigenerational story of fathers and sons who yearn for warmth amid the ashes of their own secrets and lies. Generous, bold, epic, Marco Rafalà’s novel is a triumph.” —Brando Skyhorse, award-winning author of The Madonnas of Echo Park and Take This Man: A Memoir

“How Fires End struck me at my core. Part mourning, part witness, this is a story that yearns to make peace with the endless, brutal wounds of war. It will haunt me with an unanswerable question: How do we heal from the pain of the unspoken when a family’s secrets are carried—across seas and generations—out of love and protection?” —Natalia Sylvester, author of Chasing the Sun and Everyone Knows You Go Home

“How Fires End commences with such authority and grace that it hardly seems the work of a debut novelist. There is a great weight in the tenderness and simplicity of the voice of the narrators. It has gravitas without any sacrifice of beauty.” —Victoria Redel, author of Before Everything and LA Times Best Book of the Year Loverboy

“This is a wondrous novel that burns with secret histories, arcing across space and time, voiced by characters who speak their separate truths with resilience and dignity. A gorgeous debut.” —M. Dressler, author of The Deadwood Beetle and The Last to See Me

How Fires End is available for purchase here.