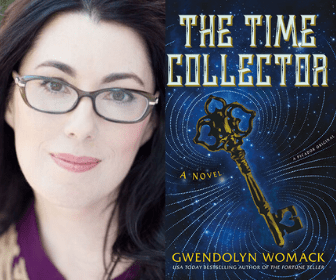 Gwendolyn Womack is the USA Today bestselling author of The Fortune Teller, The Memory Painter, and The Time Collector, published by PicadorUSA. Both a novelist and a screenwriter, Gwendolyn received an MFA in Directing Theatre, Video & Cinema from California Institute of the Arts. She lives in Los Angeles with her family, collects kaleidoscopes, and paints as a hobby.

A personal note from Gwendolyn on her writing journey…

People often ask me when did I begin to write and what lead me to writing novels. The path was a winding one.Growing up in Houston, Texas, I began writing poetry at an early age. I loved books and was always reading. I also took children’s acting classes at the Alley Theater and enjoyed the plays we would put on. As I grew older I had a deep wanderlust to travel, so after high school, I camped all over the US and Canada for months and then ended up at the University of Alaska in Fairbanks to study Environmental Science. After taking loads of science classes and working for the US Forest Service planting trees, I realized that path wasn’t for me. Through a serendipitous chain of events I changed my major to theater and began writing and directing plays.

During college in 1993 I lived in St. Petersburg, Russia on an independent study working with theater companies. Living in Russia soon after Perestroika was an incredible life experience. After I returned to the States and graduated, I attended California Institute of the Arts’ MFA program in Directing Theatre, Video & Cinema in Valencia. At CalArts they wanted us to write our own material and I loved doing that so much I realized writing and not directing was my first passion.

After graduating, I got a day job and began pursuing feature screenwriting. Over time I developed material with producers and had some options on a few scripts. All the while the idea began to form in my mind that I really wanted to write a novel. It was something I had always known I would attempt at some point in my life. Writing a novel felt like the marathon of storytelling and I wanted to do it too.

The opportunity came in 2009. My family moved to Japan to a small city outside of Tokyo and I was excited at the adventure. I started The Memory Painter while living there in early 2010. The story took two years to write. I moved back to the States in 2011 and then I spent 2012 revising the manuscript while trying to find an agent. In 2013 I signed with Brianne Johnson at Writers House and Picador acquired The Memory Painter soon after.

The night before I received the offer for the book I had insomnia, because I could feel that something wonderful was about to happen. The next morning my life changed and the journey of publication for The Memory Painter began.

To stay connected with me along the way you can sign up for my e-newsletter, The Kaleidoscope Express (I collect kaleidoscopes)…

Author visits with Gwendolyn Womack are available via NovelNetwork.com.