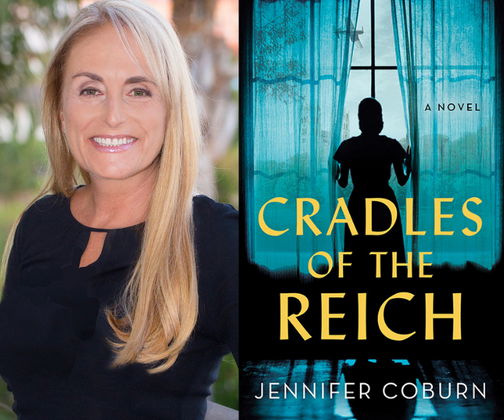 When I decided to write Cradles of the Reich, a historical novel about the Nazi Lebensborn breeding program, I knew it would require a great deal of research. I would be writing about Reichsführer Heinrich Himmler’s top-secret plan to create two million babies for the expanding Reich from the perspective of three women at a maternity home: the resister, the true believer, and the bystander. I understood what a monumental job this would be but looked forward to it because I have always been fascinated, and horrified, by Hitler’s rise to power.

I was eager to explore the German ethos at the time, specifically among women. I wanted to know why they were convinced that having “a child for Hitler” was the most noble and patriotic thing they could do. Unwed pregnant women of “racial value” volunteered to live at state-sponsored maternity homes and give their babies to “good” German families. Others agreed to become pregnant with the children of SS officers. When the program expanded into one where 200,000 blond-haired, blue-eyed infants and toddlers were kidnapped from Nazi-occupied countries, women nurses oversaw their “Germanization” and adoption.

To give me the context in which the Lebensborn Society existed, I read about Germany’s invasion of European countries, antisemitic public policies, battles and treaties. I watched reels of Nazi propaganda films and took classes on the Third Reich. What I didn’t expect was how many rabbit holes I would go down to understand the most mundane cultural details that would help me craft a historically accurate portrayal of the period.

It was a great deal of work, but I loved every moment, because anything that could shed light on the period would help me share a more compelling story with readers.

I first realized the enormity of the task that lay ahead of me when writing the opening chapter. I had just finished researching Nazi racial screening tools when Gundi, the heroine, spots a swastika pin on her doctor’s white jacket. I wanted to make sure the pin Dr. Gregor Ebner (the actual medical director of the Lebensborn Society) wore accurately reflected his status in the party. Five hours later, I knew quite a bit about the enamel pins Nazis wore – what the colors, designs, and rims meant. This was page three.

I called on Dr. Randall Bytwerk, an expert in Nazi propaganda, for details about how posters were displayed in public. (Did they need to be six inches apart, clustered together by theme, or color coordinated?) He had a wealth of information and offered hard-to-find information about the baby-naming ceremonies that Nazis held to welcome infants to the party. At these ceremonies, an SS officer pulled his sword from his scabbard and placed it on the baby’s stomach. There was also a very specific layout of how the ceremonial table was set – where the dried flowers were in relation to the portrait of Hitler, and where the candleholder was placed.

I reached out to German author Bernhard Schlink, the food historian Ursula Heinzelmann, and architectural historian Charles Belfoure to ensure cultural and linguistic authenticity. I made an unlikely friend in a 90-year-old man in my community who was 7 years old and living in Berlin during the November 1938 pogroms the Nazis called Kristallnacht. He not only gave me an honest account of his childhood love of Hitler and fear of Jewish people, but he also gave me a reality check.

I was writing a scene where Irma, a nurse at the Heim Hochland maternity home, remembered when her husband proposed to her right before the Great War. I thought it would be sweet if her beloved Helmut tossed a coin into a fountain and make a wish that she would marry him. I asked Rolf if this was a custom in Germany.

He was so confused. “Wait…what?!” he exclaimed. “Why is this man throwing away money?” I explained the scenario again and told him the person would only be tossing in a pfennig – a penny.

Rolf replied, “Listen to me, if you write a scene where a German throws a coin – even a pfennig – into a fountain, the next scene had better be six Germans jumping into the fountain to fight over it.”

My favorite example of going down a rabbit hole, though, involves a rabbit.

When we meet Hilde, the 18-year-old Nazi true believer, she enters her home and smells that her mother is making hasenpfeffer – a braised hare stew with bacon and red wine. After writing the scene, I realized the chapter was set in April. It might be too warm for a hearty meal like stew. Ursula Heinzelmann told me that was not the problem. She said Germans eat stew in spring but where would my character get a rabbit in April when the hunting season ends in December?

I told her that Hilde was from a high-ranking SS family. They can hunt whenever they want. She patiently explained that even if Hilde’s father hunted a rabbit in April, the hare would just be coming out of hibernation and wouldn’t be plump enough. The meat would be stringy. I asked if they might have access to freezing and she agreed that this would be possible.

So, when you see one line of internal dialogue where Hilde wonders – I wonder where Mama found a rabbit this time of year, much less one plump enough to make a stew with – know that was 7.5 hours of research.

My greatest hope is that readers will find the stories of Gundi, Hilde, and Irma a page-turner. I aim to explore this little-known period of history through the intimate lens of women’s relationships, and tell a story that leaves readers thinking about and discussing the politicization and commoditization of women’s bodies and fertility. But after years of historical research, the feedback that warms my heart the most is when readers appreciate all the work that went into writing this novel.

I hope you enjoy Cradles of the Reich. It is my honor to tell this story, and I thank you for reading my debut historical novel.

Jennifer Coburn is the author of Cradles of the Reich, a historical novel about three very different women living at a Nazi Lebensborn breeding home at the start of World War ll.

She has also published a mother-daughter travel memoir, We’ll Always Have Paris, as well as six contemporary women’s novels. Additionally, Jennifer has contributed to five literary anthologies, including A Paris All Your Own.

Jennifer lives in San Diego with her husband, William. Their daughter, Katie is currently in graduate school. When Jennifer is not going down historical research rabbit holes, she volunteers with So Say We All, a live storytelling organization, where she is a performer, producer, and performance coach. She is also an active volunteer with Reality Changers, a nonprofit that supports low-income high school students in becoming the first in their families to attend college. She specializes in college essay development, and interview prep.

Author visits with Jennifer Coburn are available via NovelNetwork.com.