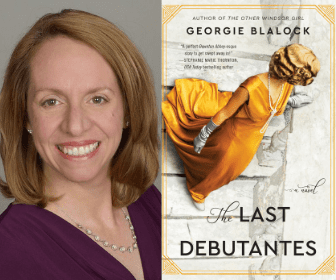 Georgie Blalock is an amateur historian and movie buff who loves combining her different passions through historical fiction, and a healthy dose of period piece films. When not writing, she can be found prowling the non-fiction history section of the library or the British film listings on Netflix. Georgie writes historical romance under the name Georgie Lee.

Award winning author Georgie Lee was born and raised in San Diego where she also attended college, majoring in television and film production. She began her professional writing career at a local cable TV station writing marketing videos, promotional spots and public service announcements, some of which still haunt the airwaves.

Blinded by the dazzling lights of Hollywood, she headed north to Los Angeles where she earned her MA in Screenwriting, met her husband, and settled into a career in the interesting but strange world of the entertainment industry.

A lifelong history buff,  Georgie  hasn’t given up hope that she will one day inherit a title and a manor house. Until then, she fulfills her dreams of lords, ladies and a season in London through her stories.  When not writing, she can be found reading non-fiction history or watching any movie with a costume and an accent.

ABOUT THE LAST DEBUTANTES:

Fans of The Kennedy Debutante and Last Year in Havana will love Georgie Blalock’s new novel of a world on the cusp of change…set on the eve of World War II in the glittering world of English society and one of the last debutante seasons.

They danced the night away, knowing their world was about to change forever. They were the debutantes of 1939, laughing on the outside, but knowing tragedy— and a war—was just around the corner.

When Valerie de Vere Cole, the niece of Prime Minister Neville Chamberlain, makes her deep curtsey to the King and Queen of England, she knows she’s part of a world about to end. The daughter of a debt-ridden father and a neglectful mother, Valerie sees firsthand that war is imminent.

Nevertheless, Valerie reinvents herself as a carefree and glittering young society woman, befriending other debutantes from England’s aristocracy as well as the vivacious Eunice Kennedy, daughter of the U.S. Ambassador. Despite her social success, the world’s troubles and Valerie’s fear of loss and loneliness prove impossible to ignore.

How will she navigate her new life when everything in her past has taught her that happiness and stability are as fragile as peace in our time? For the moment she will forget her cares in too much champagne and waltzes. Because very soon, Valerie knows that she must find the inner strength to stand strong and carry on through the challenges of life and love and war.

The Last Debutantes is available for purchase here.

PRAISE AND RECOGNITION FOR THE LAST DEBUTANTES:

“As the world teeters on the precipice of war, a glittering group of debutantes try to hold onto life as they know it, even as they know everything is about to change. A perfect Downton Abbey-esque story to get swept away in!”  — Stephanie Marie Thornton, USA Today bestselling author of And They Called It Camelot

“An exciting and compelling view inside the glamorous lives of debutantes coming out in the 1930’s before WWII… Georgie Blalock brings to life not only the glitz of the aristocracy but the sometimes ugly gossip behind the scenes in this fascinating tale of family, friendship, betrayal, and survival.” — Eliza Knight, USA Today bestselling author of The Mayfair Bookshop

“A fascinating portrayal of London high society overshadowed by the threat of World War II, Georgie Blalock’s The Last Debutantes follows Valerie de Vere Cole, niece of Neville Chamberlain, as she navigates the perilous waters of the London season…Atmospheric, moving and compelling, The Last Debutantes is a must read!” — Christine Wells, author of Sisters of the Resistance

“Storm clouds hover over high society on the brink of war, tarnishing the glamour of The Season in this wonderfully told story of love, war, and friendship.” — Bryn Turnbull, author of The Woman Before Wallace

“Rich with historical detail, The Last Debutantes is an immersive read about the final season of house parties and champagne fountains before the war… A must for fans of Downton Abbey and The Crown!”   — Kerri Maher, author of The Girl in White Gloves

“The Last Debutantes by Georgie Blalock gives us a glimpse into a social season that will be unlike all of the others that came before it…A story about friendship and finding yourself in a world that is about to change irrevocably, The Last Debutantes will appeal to historical fiction lovers.” — Brenda Janowitz, author of The Grace Kelly Dress

Author visits with Georgie Blalock are available via NovelNetwork.com.