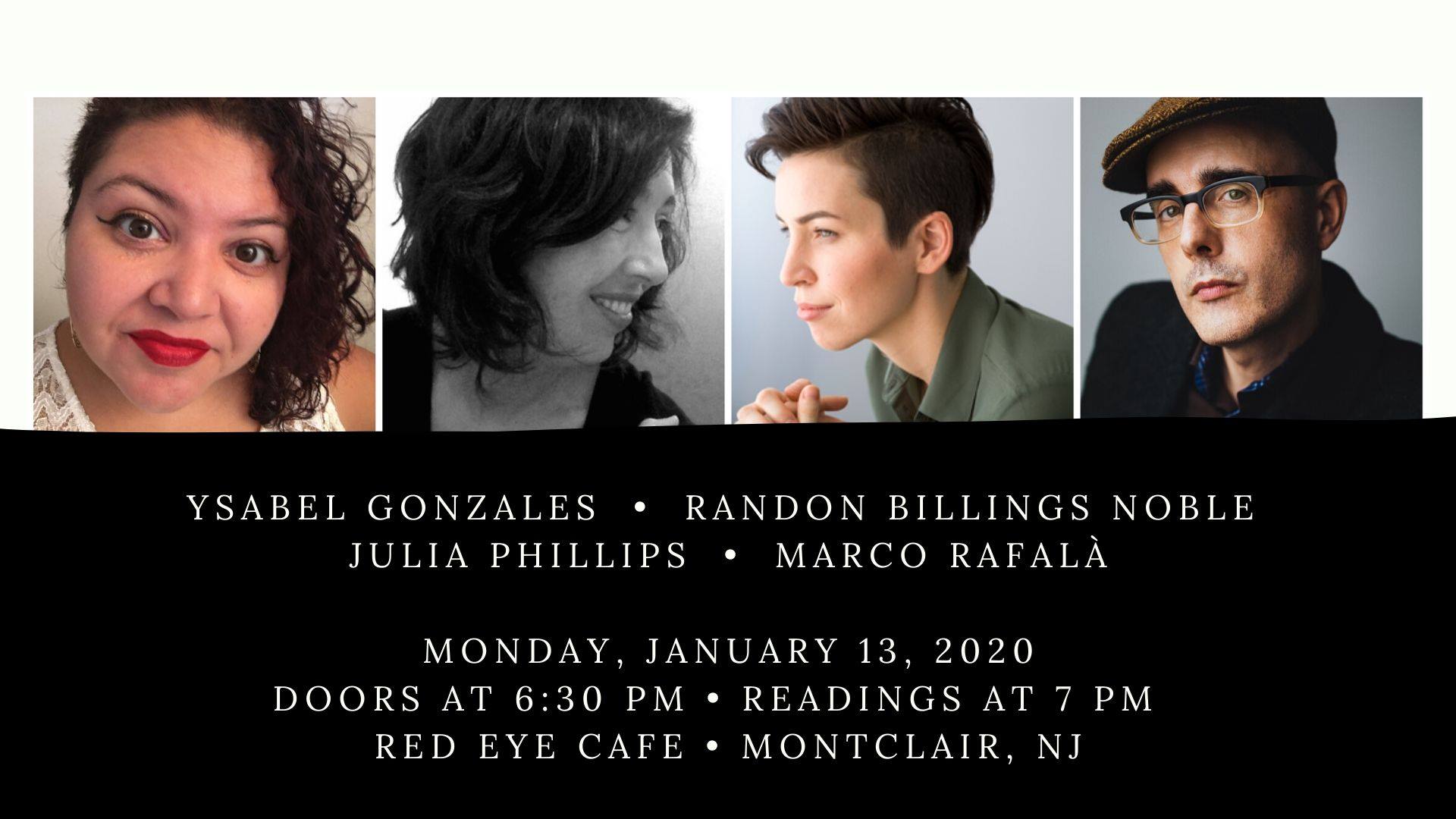 Join us on January 13th at the Red Eye Cafe for an evening with Ysabel Y. Gonzalez, Randon Billings Noble, Julia Phillips, and Marco Rafalà. Doors will open at 6:30pm, with readings at 7pm, followed by a Q&A with the writers, and time to get your books signed. Watchung Booksellers will be on hand to sell books and the coffee and baked goods from Red Eye will be delicious. We can’t wait to see you!

Newark, NJ native Ysabel Y. Gonzalez, is also known for her performance poetry under the alias Ancestral Poetisa. She received her BA from Rutgers University and an MFA in Poetry from Drew University. Ysabel has received invitations to attend VONA, Tin House, Ashbery Home School and BOAAT Press workshops. She’s a CantoMundo Fellow, and has been published in HEArt Journal; Paterson Literary Review, Tinderbox Journal, Anomaly; Vinyl, and others. She is the author of Wild Invocations (Get Fresh Book, 2019). You can read more about her work, at www.ysabelgonzalez.com.

Randon Billings Noble is an essayist. Her collection Be with Me Always was published by the University of Nebraska Press in March 2019, and her lyric essay chapbook Devotional was published by Red Bird in 2017. Other work has appeared in the Modern Love column of The New York Times, The Rumpus, Brevity, Creative Nonfiction, and elsewhere. She has had residencies at the Virginia Center for the Creative Arts, the Millay Colony for the Arts, Hambidge, and the Vermont Studio Center. Currently she is the founding editor of After the Art. You can read more at www.randonbillingsnoble.com.

Julia Phillips is the debut author of the nationally bestselling novel Disappearing Earth, which is being published in nineteen languages and is a finalist for the National Book Award. A Fulbright fellow, Julia has written for The New York Times, The Atlantic, and The Paris Review. She lives in Brooklyn and is a Montclair native.

Marco Rafalà is a first-generation Sicilian American novelist, musician, and writer for award-winning tabletop role-playing games. He earned his MFA in Fiction from The New School and is a cocurator of the Guerrilla Lit Reading Series in New York City. Born in Middletown, Connecticut, he now lives in Brooklyn, New York. How Fires End is his debut novel. For more information, visit www.marcorafala.com.