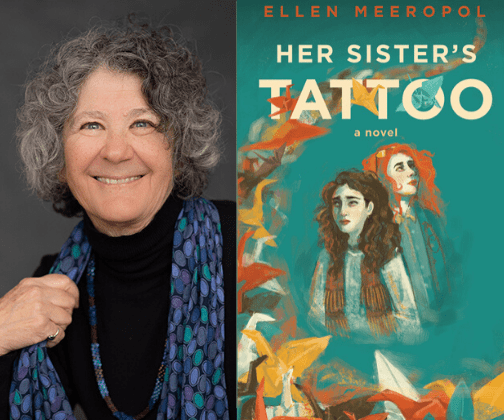 A literary late bloomer, Ellen Meeropol began seriously writing fiction in her fifties, but her first publications came much earlier. At age twelve, her essay, “I am a Square Dance Orphan,” was published in a national square dance magazine and she wrote a monthly feature column for her high school newspaper in the Washington, D.C. area. Ellen studied art at Earlham College and the University of Michigan.

After working as a day care teacher and a women’s reproductive health counselor, Ellen became a registered nurse and then a nurse practitioner, working at a children’s hospital in western Massachusetts for 24 years. During that time, she authored and co-authored two dozen articles and book chapters about pediatric issues and latex allergy. She was honored for excellence in nursing journalism by the nursing honor society Sigma Theta Tau and received the Ruth A. Smith Writing Award for excellence in writing in the profession of nursing. In 2005 Ellen was given the Chair’s Excellence Award from the Spina Bifida Association of America for her advocacy around latex allergy and spina bifida.

In 2000, after decades of reading voraciously and thinking that “someday” she would write, Ellen started writing fiction and studying craft, earning an MFA from the Stonecoast Program at the University of Southern Maine. In 2005, determined to spend more time with the characters demanding her full attention, she left her nurse practitioner career.

Ellen is a frequent presenter at conferences and book festivals, including the AWP annual conference, The Muse and the Marketplace, Wordstock, Virginia, Salem, and Maine Festivals of the Book, the San Miguel International Writing Conference, and the WriteAngles Writers Conference. She has taught fiction workshops at Writers in Progress in Florence, MA, Grub Street in Boston, and World Fellowship Center in New Hampshire. She volunteers with WriteAngles, Inc. and is a Founding Member of the Straw Dog Writers Guild, coordinating its social justice committee.

She is married to Robert Meeropol, the younger son of Ethel and Julius Rosenberg. They have two grown daughters, two grandchildren, and one cat, and live in western Massachusetts. Ellen is a founding board member of the Rosenberg Fund for Children, which was started by Robert in 1990 in honor of his parents’ refusal to “name names.” Ellen’s dramatic script telling the story of the foundation has been produced five times, most recently in Manhattan in June 2013, featuring Eve Ensler, Angela Davis, and Cotter Smith.

ABOUT HER SISTER’S TATTOO:

In August 1968, Rosa and Esther Cohen march through downtown Detroit protesting the war in Vietnam. The march is peaceful, but when a bloodied teenager describes a battle with mounted police a few blocks away, the sisters hurry to offer assistance. Trying to stop the violence, they instead intensify it. An officer is seriously injured. Rosa and Esther are arrested and charged with conspiracy and attempted murder.

For Rosa, their arrest offers an opportunity to make a political statement, another way to protest an unacceptable war. Esther wants to avoid prison and stay home with her infant daughter, Molly; the only way to do that is to accept a plea bargain and testify against Rosa at trial. The consequences of these actions lead one sister underground and to prison, the other to leave town to bury her past in a new life. Molly grows up unaware of her family history until she meets Rosa’s daughter, her cousin Emma, at summer camp.

Told from multiple points of view and through the sisters’ never-mailed letters, and bracketed by the Vietnam and Iraq wars, HER SISTER’S TATTOO explores the thorny intersection of sibling loyalty and clashing political decisions.