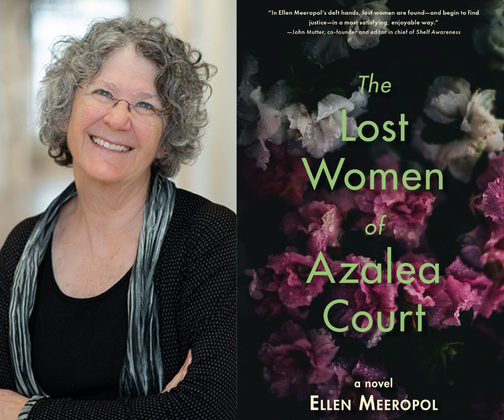 Ellen Meeropol is the author of the novel The Lost Women of Azalea Court (September 2022) and guest editor for the anthology Dreams for a Broken World (November 2022). (Click on images to right to read about those upcoming books) Previous novels are Her Sister’s Tattoo, Kinship of Clover, On Hurricane Island, and House Arrest. Her work has been honored by the Sarton Women’s Prize, The Women’s National Book Association, and the Massachusetts Center for the Book.

A literary late bloomer, Ellen Meeropol began seriously writing fiction in her fifties, but her first publications came much earlier. At age twelve, her essay, “I am a Square Dance Orphan,” was published in a national square dance magazine and she wrote a monthly feature column for her high school newspaper in the Washington, D.C. area. Ellen studied art at Earlham College and the University of Michigan.

After working as a day care teacher and a women’s reproductive health counselor, Ellen became a registered nurse and then a nurse practitioner, working at a children’s hospital in western Massachusetts for 24 years. During that time, she authored and co-authored two dozen articles and book chapters about pediatric issues and latex allergy. She was honored for excellence in nursing journalism by the nursing honor society Sigma Theta Tau and received the Ruth A. Smith Writing Award for excellence in writing in the profession of nursing. In 2005 Ellen was given the Chair’s Excellence Award from the Spina Bifida Association of America for her advocacy around latex allergy and spina bifida.

In 2000, after decades of reading voraciously and thinking that “someday” she would write, Ellen started writing fiction and studying craft, earning an MFA from the Stonecoast Program at the University of Southern Maine. In 2005, determined to spend more time with the characters demanding her full attention, she left her nurse practitioner career.

Ellen is a frequent presenter at conferences and book festivals, including the AWP annual conference, The Muse and the Marketplace, Wordstock, Virginia, Salem, and Maine Festivals of the Book, the San Miguel International Writing Conference, and the WriteAngles Writers Conference. She has taught fiction workshops at Writers in Progress in Florence, MA, Grub Street in Boston, SouthWest Writers, and World Fellowship Center in New Hampshire. She is a Founding Member of the Straw Dog Writers Guild, coordinating its Emerging Writer Fellowship program.

She is married to Robert Meeropol, the younger son of Ethel and Julius Rosenberg. They have two grown daughters, two grandchildren, and one cat, and live in western Massachusetts. Ellen is a founding board member of the Rosenberg Fund for Children, which was started by Robert in 1990 in honor of his parents’ refusal to “name names.” Ellen’s dramatic script telling the story of the foundation has been produced five times, most recently in Manhattan in June 2013, featuring Eve Ensler, Angela Davis, and Cotter Smith.

ABOUT THE LOST WOMEN OF AZALEA COURT:

On a chilly November morning, eighty-eight-year-old Iris Blum goes missing from Azalea Court, a six-bungalow development on the grounds of a long-closed state mental hospital. Her husband, Asher Blum, was the last head psychiatrist at the hospital and is writing a book about the treatment of mental illness. Their daughter Lexi, the neighbors, and police detective McPhee suspect Dr. Blum of being involved in Iris’s disappearance. When the searches and interviews come up empty, the neighbors dig into the past―Asher’s childhood experiences with anti-Nazi partisans in the forests of Poland, unethical practices at the mental hospital, and Iris’s mysterious best friend, Harriet. The neighbors of Azalea Court, Lexi, Harriet, and Detective McPhee narrate this story together, uncovering ghosts, secrets, and lies.

PRAISE FOR THE LOST WOMEN OF AZALEA COURT:

“In The Lost Women of Azalea Court, hidden histories haunt both the landscape and the characters. I cherished the page-turning qualities of this well-crafted, fast-paced story.”—Lisa Downing, Director, Forbes Library

“A compelling tale of family secrets, friendship, and private traumas set on the grounds of a long-closed state asylum. The investigation into a missing woman unearths the hospital’s darkest history. Fantastic setting and taut pacing.”—Kathy Crowley, co-owner, Belmont Books

“A richly-told story of a marriage—and a community—unraveled by secrets, knit back by love. The Lost Women of Azalea Court is a beautiful, wise, and big-hearted novel.”—Jennifer Rosner, author of The Yellow Bird Sings

“The Lost Women of Azalea Court begins with a seemingly simple, explainable mystery: an eighty-eight-year-old woman disappears from the house she shares with her husband, a psychiatrist, and the former head of the now-closed state mental hospital for which Azalea Court served as staff housing. But that mystery is just one of many related, slowly unveiled mysteries and secrets, some of which go back to the Holocaust and the Red Scare after World War II. In the search for the missing woman, the women of Azalea Court, a delightful mix of characters, unexpectedly band together. In Ellen Meeropol’s deft hands, lost women are found—and begin to find justice—in a most satisfying, enjoyable way.”—John Mutter, co-founder and editor in chief of Shelf Awareness