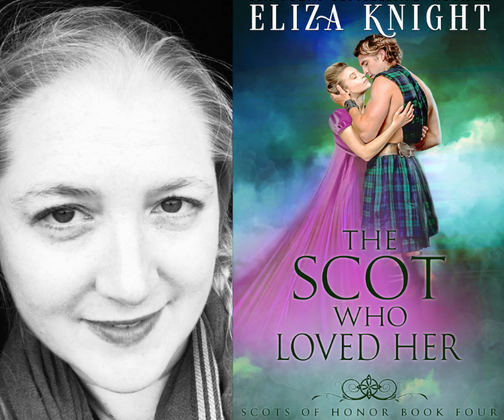 Eliza Knight is an award-winning and USA Today bestselling author.

Her love of history began as a young girl when she traipsed the halls of Versailles and ran through the fields in Southern France. She can still remember standing before the great golden palace, and imagining what life must have been like. Join Eliza (sometimes as E.) on riveting historical journeys that cross landscapes around the world.

While not reading, writing or researching for her latest book, she chases after her three children. In her spare time (if there is such a thing…) she likes daydreaming, wine-tasting, traveling, hiking, staring at the stars, watching movies, shopping and visiting with family and friends.

She is the creator of the popular historical blog, History Undressed and a co-host on the History, Books and Wine podcast.

She lives atop a small mountain with her own knight in shining armor, three princesses, two very naughty Newfies, and a turtle named Fish.

ABOUT THE SCOT WHO LOVED HER:

After a brutal fight to secure a vital military secret, Scottish lord Malcolm Gordon, codename Raven, races from Edinburgh to deliver the news to his commanding officer in London. But before he arrives, he crosses paths with a lady’s bullet.

Miss Olivia Aston is horrified that she’s shot a man while hunting. Fortunately, he’s still alive. But what to do with the gravely wounded Highlander? Her father despises the Scots and will likely turn him out once he’s discovered. With this latest blunder, there is also the very real possibility that her father will permanently remove her from society as he did her sister. But she can’t simply leave him to die.

Malcolm awakens to discover that the information he carried has been stolen, and there’s no evidence of the culprit, other than a memory of her soft voice and bonny face. Time is running out. Despite his wound (mysteriously stitched), he must now hurry to get to the duke. When he reaches London, Malcolm learns the secrets he carried have already been compromised. He is charged with ferreting out the traitor amidst Edinburgh society. Begrudgingly, Malcolm is thrust into one soiree after another, only to come face to face with his beautiful, charming female assailant.

Will she shoot him again? Though he has no solid evidence against Lady Olivia, she has to be linked to the traitors. He could drag her from the ballroom, present her to the powers that be as a possible suspect, but instead, he takes the dangerous flirtation to the next level. There is something utterly alluring about a woman who holds a weapon as well as she dances. Malcolm’s determined to make Olivia swoon until she confesses everything—that is, until someone makes an attempt on both their lives. What started as a game of cat and mouse turns into a deadly adventure, revealing startling intelligence neither of them sees coming.

Author visits with Eliza Knight are available via NovelNetwork.com.