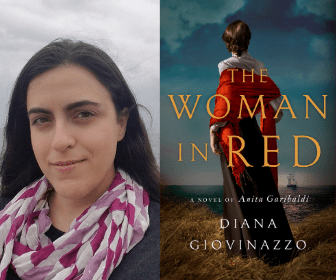 Diana Giovinazzo is the co-creator of Wine, Women and Words, a weekly literary podcast featuring interviews with authors over a glass of wine. Diana is active within her local literary community as the vice president of the Los Angeles chapter of the Women’s National Book Association. The Woman in Red is her debut novel.

As an Italian girl from Central New York, there was always a stack of books by my side. But it wasn’t always about reading other people’s stories, I had to tell them. My first book was a compelling tale of a family making a journey along the Oregon Trail for Mrs. Dickinson’s second-grade class project. Since then, my world has revolved around books.

I am a self-proclaimed history nerd with an insatiable wanderlust. However, it wasn’t until I tried to study my own family’s genealogy that I found a passion for historical fiction. Specifically, Italian and American Italian history.

I currently reside in the Los Angeles area with my husband/favorite travel companion and our dogs.

ABOUT THE WOMAN IN RED:

Destiny toys with us all, but Anita Garibaldi is a force to be reckoned with. Forced into marriage at a young age, Anita feels trapped in a union she does not want. But when she meets the leader of the Brazilian resistance, Giuseppe Garibaldi, in 1839, everything changes.
Swept into a passionate affair with the idolized mercenary, Anita’s life is suddenly consumed by the plight to liberate Southern Brazil from Portugal — a struggle that would cost thousands of lives and span almost ten bloody years. Little did she know that this first taste of revolution would lead her to cross oceans, traverse continents, and alter the course of her entire life — and the world.
At once an exhilarating adventure and an unforgettable love story, The Woman in Red is a sweeping, illuminating tale of the feminist icon who became one of the most revered historical figures of South America and Italy.

PRAISE AND RECOGNITION FOR THE WOMAN IN RED:

“The Woman in Red is an epic tale of one woman’s fight to take control of her circumstances to create the life of her dreams. Anita Garibaldi is a modern woman in the 19th century who led with her heart despite circumstances so dire, most mortals would give up. Her passionate affair with Giuseppe Garibaldi freed her from a provincial life into one of passion, danger and purpose. Ms. Giovinazzo has crafted a spectacular story in this stunning debut.”―Adriana Trigiani, New York Times bestselling author of Tony’s Wife

“Anita Garibaldi, one of the greatest unsung heroines in history, comes to passionate life in Diana Giovinazzo’s searing debut novel, The Woman in Red. Brazilian revolutionary, gaucho, and partner-in-arms to her husband, Giuseppe Garibaldi, Anita is a feminist icon to die for.”―Mary Sharratt, author of Ecstasy and Illuminations

“Anita Garibaldi is exactly the kind of courageous woman whose astonishing story of defiance and dedication — to freedom and to her passions — I’ve been craving. Told in her bold and unflinching voice, The Woman in Red by Diana Giovinazzo brings this brazen, complex woman — and the man she fought beside — vividly to life.”―Erin Lindsay McCabe, USA Today bestselling author of I Shall Be Near To You

“Captivating . . . Giovinazzo adds realistic details to the fast-paced narrative. The novel’s focus on a strong woman who defied the odds to follow her heart will appeal to fans of historical fiction.”―Publishers Weekly

“A great swashbuckler . . . Epic in scope, adventurous in nature, dreamily romantic, and occasionally a nail biter, this is the story of a passionate love affair, a feminist before feminism’s time, history as it happened in three countries, triumph, and tragedy.”―New York Journal of Books

“Giovinazzo gives the reader a fascinating look at 19th-century South America and its culture, where machismo prohibited women from any meaningful role or status in society. It’s Anita Garibaldi’s fight against those prohibitions that make her such an inspirational character . . . The Woman in Red is a finely crafted, exciting page-turner and is highly recommended for readers interested in learning about strong and empowered women.”―Historical Novel Society

“Giovinazzo deftly brings Anita and her story to life in this sweeping saga . . . Entertaining and educational, as well as a wonderful way for readers to meet a lesser-known historical figure whose own life story could very well help influence their own by encouraging others to dig deep within to find courage and bravery.”―Ovunque Siamo

Author visits with Diana Giovinazzo are available via NovelNetwork.com.