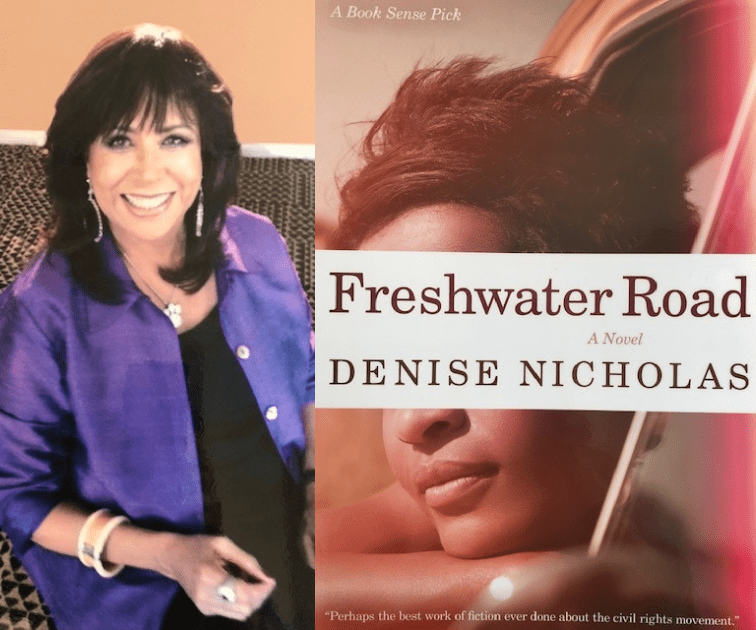 Denise Nicholas was born in Detroit and attended the University of Michigan. She later graduated from the University of Southern California. In addition to working in Janet Fitch’s writing workshop for five years, Denise attended both the Squaw Valley Community of Writers Workshop and the Natalie Goldberg Writers Workshop in Taos, New Mexico. She has been published in the anthology, “Hands on the Freedom Plow: Personal Accounts by Women in SNCC”, University of Illinois Press; Essence Magazine, The Washington Post, The Huffington Post Blog. For the last three years, Ms. Nicholas has been a participant in the Sacramento Black Book Fair, as author and as writing teacher. Freshwater Road is her debut novel.

As an actress, Denise has been applauded for her portrayals of complex, resilient women on film, television and the stage, most memorably for her ground-breaking, starring role as high school guidance counselor Liz McIntyre on the ABC comedy-drama, “Room 222” and for her co-starring role as Councilwoman Harriet DeLong on the drama series, “In the Heat of the Night” opposite the late Carroll O’ Connor.

Between those two long running series, Nicholas guest starred on shows as varied as “A Different World,” “Flip,” “Amen,” “227”, “Magnum P.I.,“ “The Cosby Show,” “The Sophisticated Gents” and “My Wife and Kids,” to name a few. She co-starred opposite Bill Cosby in the film “Ghost Dad” and opposite Sidney Poitier and Mr. Cosby in the films, “Let’s Do It Again” and “A Piece of the Action. Along the way, she has garnered three Golden Globe nominations and won three NAACP Image Awards. Nicholas is the recipient of two Los Angeles Emmy Awards for co-producing and performing in the PBS Special, “Voices of My People: in Celebration of Black Poetry.”

Denise began her career as a founding member of the Free Southern Theater, touring Mississippi and Louisiana during the most violent days of the civil rights movement. From there, she went on to New York, auditioning for and being accepted into the Negro Ensemble Company, as a founding member of the first professional company. From the stage of the St. Marks Playhouse in New York, she was invited to screen test for the Liz McIntyre role on “Room 222.” Her career in television had begun!

At the end of the “Heat of the Night” run, Denise, having written 6 episodes for that series under the mentorship of Carroll O’Connor, decided to devote her creative life to writing, the work she had always longed to do. She found her way to “White Oleander” author Janet Fitch’s Journeyman’s Workshop and out of that nose-to-the-grindstone-experience came her novel, “Freshwater Road.” Denise’s autobiographical debut novel was selected as one of the Best Books of 2005, by The Washington Post, The Detroit Free Press, The Atlanta Journal -Constitution, Newsday and The Chicago Tribune. The Washington Post Book World Review wrote: “It’s impossible to praise “Freshwater Road too much. It is surely the best work of fiction about the civil rights movement since Ernest J. Gaines, “The Autobiography of Miss Jane Pittman.” The novel received a starred review in Publisher’s Weekly which wrote: “Nicholas’ novel is a rich, absorbing debut…sometimes gorgeous, sometimes terrifying, the debut of a talented writer.” The novel went on to win the Zora Neale Hurston – Richard Wright Award for debut fiction, the American Library Association’s Black Caucus Award for debut fiction and was a Simon & Schuster Book Club Pick as well as a Book Sense pick.In 2008, Brown University presented a staged adaptation of “Freshwater Road” to full houses and critical acclaim. In February 2014, Essence Magazine honored Denise for her involvement in the civil rights movement at its Black Women in Hollywood Luncheon.

From award-winning actress Denise Nicholas: a ten-year anniversary reissue of her powerful and dramatic coming of age story set in Mississippi during the Freedom Summer of 1964. Freshwater Road has been called one of the best novels written about the Civil Rights Movement. Nicholas herself has been praised repeatedly over the years for her beautiful prose and is continually mentioned along with Alice Walker and Ernest J. Gaines as the most important novelists documenting this era.

When University of Michigan sophomore Celeste Tyree travels to Mississippi to volunteer her efforts in Freedom Summer, she’s assigned to help register voters in the small town of Pineyville, a place best known for a notorious lynching that occurred only a few years earlier. As the long, hot summer unfolds, Celeste befriends several members of the community, but there are also those who are threatened by her and the change that her presence in the South represents. Finding inner strength as she helps lift the veil of oppression and learns valuable lessons about race, social change, and violence, Celeste prepares her adult students for their showdown with the county registrar. All the while, she struggles with loneliness, a worried father in Detroit, and her burgeoning feelings for Ed Jolivette, a young man also in Mississippi for the summer.

By summer’s end, Celeste learns there are no easy answers to the questions that preoccupy her—about violence and nonviolence, about race, identity, and color, and about the strength of love and family bonds. In Freshwater Road, Denise Nicholas has created an unforgettable story that—more than ten years after first appearing in print—continues to be one of the most cherished works of Civil Rights fiction.

PRAISE AND RECOGNITION FOR FRESHWATER ROAD

“Surely the best work of fiction about the civil rights movement since Ernest J. Gaines’s The Autobiography of Miss Jane Pittman.” —The Washington Post

“What a wonderful surprise Denise Nicholas’s first novel is. Her textured characters unfold against the background of an historic encounter that was destined to change America forever.” —Sidney Poitier

“Tensions both physical and psychic inform Freshwater Road by Denise Nicholas, which may well be the finest novel about the civil-rights era. . . . Perhaps Nicholas’s experience as an actress is what endowed her writing with its deep understanding of plot and character. Whatever the source of her talents, in my reading experience, few books have so artfully entwined a coming-of-age saga with the awakening of moral conscience.” —Samuel G. Freedman, The Daily Beast

“In Freshwater Road, Denise Nicholas brings alive all the colors and emotions of the civil rights movement during the perilous adventure that was Freedom Summer.” —Janet Fitch, White Oleander

“Vividly depicts the cost of activism. . . Nicholas has a genuine way with words, a keen grasp of visual and emotional metaphor, and the novel illuminates the internal consequences of institutionalized racism and the often suppressed connections between South and North.” —Chicago Tribune

“With spare, powerful sentences that quietly sneak up on you, Nicholas smoothly transports us to the not-so-distant past for a reflection of the civil rights movement’s subtle triumphs.” —Essence

“A lovely and arresting novel about class and race in the South.” —Time Out Chicago

“Offers a sensitive and absorbing story of a young woman coming of age emotionally and racially.” —Vanessa Bush, Booklist

“Accomplished. . . . Nicholas appears poised to have an equally successful second career as a novelist.” —Chicago Reader