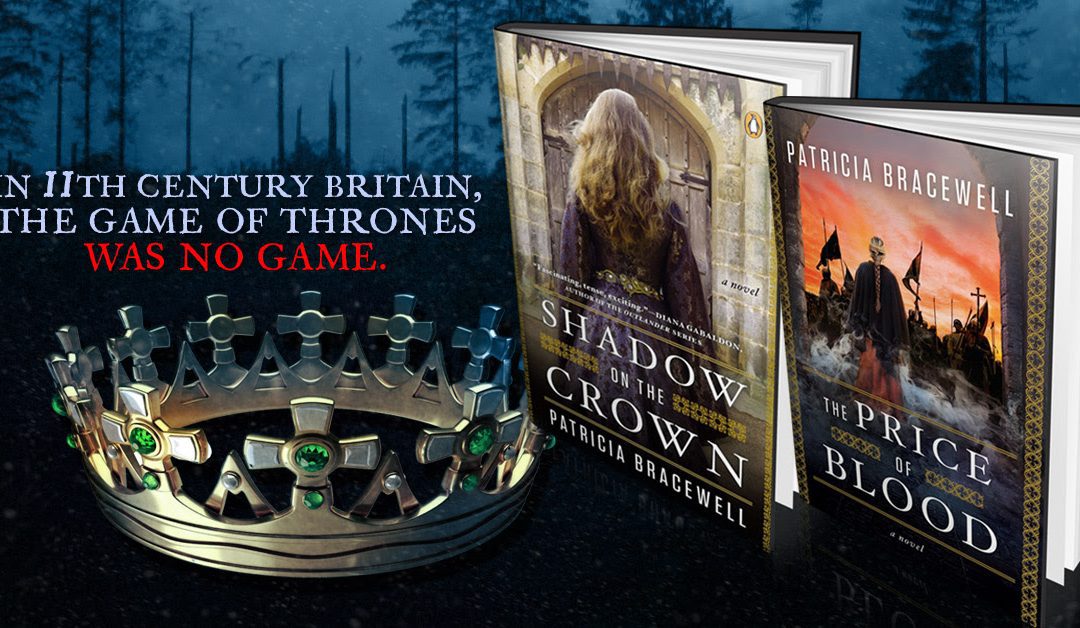 I expect that many of you are in book groups, and I hope that when you discuss a novel you consider the book’s title and what it means. (My own neighborhood book group just discussed THE TSAR OF LOVE AND TECHNO which drew mixed reviews from us. I led the discussion and read the book twice. I LOVED IT.)

Authors frequently give their manuscripts working titles, which are subject to change as the work progresses. Sometimes, in the end, it’s the publishing house that chooses the title for the finished product, but in my experience the author usually has the final say.

The titles of my first two books were my invention, although there were changes along the way. The working title of my first novel about Emma was ROYAL HOSTAGE. My agent, though, wisely observed that it referenced just the queen; and although Emma was the central character, the book was about more than just her. At my agent’s suggestion I put my thinking cap on and came up with a bigger title, SHADOW ON THE CROWN. That phrase has meaning for each of the viewpoint characters in the novel. Probably the most obvious is its meaning for King Æthelred, who is haunted by the shadow of his dead brother. For Emma, the shadow is the king himself as her queenship is overshadowed by the harsh reality of marriage to Æthelred. For Elgiva the shadow is Emma, who has usurped the crown that Elgiva thought would be hers. And for Athelstan, the shadow is the threat that the crown might be lost altogether. Early in the novel Athelstan asks the seer who will wear the crown of England when his father dies, and he is told “There is a shadow on the crown, my lord, and my Sight cannot pierce the darkness.”

Interestingly, the only book cover that reflected the actual title was the UK trade paperback, with its crown and shadows.

Emma’s second novel, THE PRICE OF BLOOD owned that title right from the start. My research had turned up a translation of the Latin HISTORY OF THE ENGLISH KINGS by William of Malmesbury that used that phrase. William claimed that Æthelred was ‘hounded by the shade of his brother, demanding terribly the price of blood.’ It was an apt description, I thought, of the ghost that haunts the king, but also of the wergild, or blood price, that was part of English law at that time. The wergild was the value set on a person’s life, and when Æthelred’s brother, King Edward, was murdered, no wergild was paid. The bloody Danish raids on England that occur throughout that second book were the price—the blood price—exacted from the kingdom because the murder of a king had gone unpunished. All of England was forced to pay the price of blood.

The audiobook cover of THE PRICE OF BLOOD, with its blood-red sky, background army,  and Emma clasping a sword is a chilling depiction of the events in the novel.

And that brings me to my third book, which is in the final stages of revision. For several years my working title has been, as you know PERILOUS TIDES. I thought it was a great title, because it had several meanings. It was a reference to the ocean tides that carried the Danes to England; to the tides of blood that were shed by English and Danes during the war of conquest in the years covered by the novel; and to the actual tidal wave that devastated England in 1014. They were all perilous for Emma and for the English.

However, over the past several months I have been re-thinking that title. This final book in my series, covering the years 1012 to 1017, deals specifically with the Danish conquest of England. It must have been a terrible time for the English people, and the annals from that period describe shifting alliances, battles, betrayals, murders, the slaughter of armies, and the death of kings. What they do not describe, except very, very obliquely, is what was happening to the women. Reading the chronicles, one might come to the conclusion that there were no women in England during those years.

And that was why I wrote this series of books—to give voice to the women. To Emma, as its central figure, but also to other women who appear in my novels, and this one in particular. They include the king’s daughters, the noblewomen of Emma’s household and beyond, the abbesses, and even the refugees seeking protection from the horrors of war.

The new title I have chosen is THE STEEL BENEATH THE SILK, and it is a reference to the enduring strength of the women who suffered through those years along with their men, but who were ignored by the chroniclers and have been largely forgotten. Here are a few excerpts from the manuscript that illustrate what I’m endeavoring to convey about these women.

Emma twisted her hands in despair as she fought back tears, “My faith is not strong enough, Athelstan.  I do not believe that even God has the power to stop the madness of war-besotted men.”

Emma had not come either to weep for Winchester or to upbraid the king for his failures. She had come to reason with him, to plead with him if she must.

“In times of peril, it is not the king to whom our people look for compassion, for succor, and for intercession with an angry God.  It is the queen.”

“She is no wraith,” he said, as the tall, slim figure lifted her eyes and seemed to spear him with her stern gaze. “She is a Norman. Make no mistake, there is steel beneath all that silk.”

There was steel, of course, in 11th century England. And if you are wondering if there was silk in those days, according to the book DRESS IN ANGLO-SAXON ENGLAND by Professor Gale Owen-Crocker:

“Silk garments had been available to royalty since the seventh century…but silk gradually became accessible to wider, and lower, social circles: the Monk of St. Gall records that Carolingian courtiers wore silk (from Pavia) in the ninth century…by the tenth and eleventh centuries the importation of luxury textiles (into England) was no longer primarily a personal matter, since professional merchants had established regular trade…”

So there was steel and there was silk, and the women in my novel encompass both.

Until next month,
Patricia