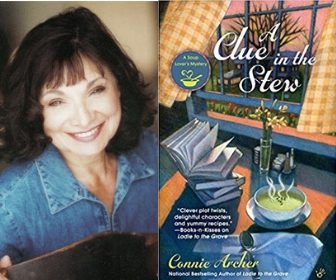 “Writing about Vermont and the By the Spoonful Soup Shop has been a marvelous trip home — home to winding roads, brilliant autumn trees and the winter snows of New England.”

Connie Archer was born and grew up in New England, ice skating on neighborhood ponds, clamming on the beach at Cape Cod and skiing in Vermont. As a schoolgirl, she spent several years wading through Caesar’s Gallic War journals and the twelve books of the Aeneid. During her summers she performed in a children’s theater troupe that traveled the suburbs of Boston, mounting productions in parks and children’s hospitals. After majoring in biology in college, she did an about face and earned a degree in English literature. Since then she’s worked at many different jobs — laboratory technician, cocktail waitress, medical secretary, and dinner theatre actress, to name just a few.

Connie lives in Los Angeles with her family and a constantly talking cat named Basil.

Q & A with Connie

Believe it or not, there is a town called Snowflake …… but in Arizona of all places. I think it’s important in village mysteries that the location is not an actual town. Because Snowflake is an imaginary place, it can have a certain protection from the realities of modern day life, even though it does have more than its share of murders.

By the Spoonful Soup Shop is located in Snowflake, Vermont.  Is there really a town in Vermont called Snowflake?

Why a soup shop?

Can there be a more comforting kind of food than soup? Okay, maybe mashed potatoes and dark chocolate . . . but after that, my vote is for soup. As all of my family and friends can attest, I’m a big soup maker and writing this series has given me the perfect excuse to experiment with new recipes. I’m always digging through my refrigerator and kitchen cabinets, combining vegetables and spices into new concoctions. But I never seem to be able to come up with interesting names for my soups, so they always end up being called something boring like “Carrot-Potato-Parsley” or “Spinach-Mushroom-Pasta.”

The village mystery seems to have a perennial appeal — why is that?

Village mysteries are neat and orderly. There is always a select cast of characters and even though life in the village seems idyllic — at least as viewed from the outside — dark currents run underneath like an underground river. Secrets from the past, old angers and betrayals, the possibilities are endlessly fascinating. The village setting also echoes elements of the classic English Country House murder with a finite number of suspects, forensics and high tech crime solving kept to a minimum, and the means and motive of murder defined by psychological or emotional drives.

Is there a reason you chose a tourist and not a local as the murder victim in Spoonful of Murder?

The By the Spoonful books are “cozies,” and in a cozy, no one we love is ever killed. In this type of story, it’s important that the victim (and hopefully even the murderer) is someone that we, as readers, have not become terribly attached to.

Isn’t it difficult to find a murderer to whom the reader hasn’t become attached?

It isn’t difficult, but it does involve introducing new characters — some guilty, some not. I have to admit I toyed with the idea of one of the town’s eccentric and lovable denizens committing murder but quickly dismissed it. It would be tantamount to imagining your friendly next door neighbor has evil intentions. Of course when something terrible happens in real life, a neighbor usually says, “But he was such a nice, quiet man.” The murderer in a cozy mystery may also be quite likeable, even though he or she has committed this heinous deed, so for that reason, it’s important the culprit is given a chance to explain or justify his or her actions.

How do you come up with your plots?

I usually start with a kernel of an idea that grabs me emotionally and involves some aspect of a close relationship — lovers, mothers and daughters, friendships that have taken a dark turn — and try to work out the “what would happen if” plot from there. Sometimes I have a great concept — poison pen letters terrorizing the town — but then it just won’t fit in to what I have in front of me and I have to let it go. And sometimes ideas come from the news. There are an unbelievable number of truth-is-stranger-than-fiction stories reported on the news.

What is it about the mystery format you find so fascinating?

I’ve thought about that a lot and can’t say that I have a good answer. Is it sorting out life’s messiest problems and sweeping the floor clean? Or is it a ghoulish fascination? A way of vicariously committing murder without the consequences? A desire for law and order? For me, I think the compelling thing is the journey into the psychology of committing that most terrible of actions and exploring the forces that would lead someone to do such a thing.

Have you always been a mystery reader?

I’m a lifelong lover of mysteries, particularly traditional mysteries that are an intellectual puzzle at one level and a psychological study on another. I loved Nancy Drew and Trixie Belden when I was in grade school and then graduated to Sherlock Holmes, Dorothy Sayers, Nicholas Freeling and Henning Mankell. And I don’t just read mysteries, I love watching them, particularly the British imports. My Netflix queue is always full of mysteries from the BBC and I so admire the quality of the writing and the production values of “Wire in the Blood,” “Case Histories,” the George Gently series, and of course, all the Poirots and Miss Marples