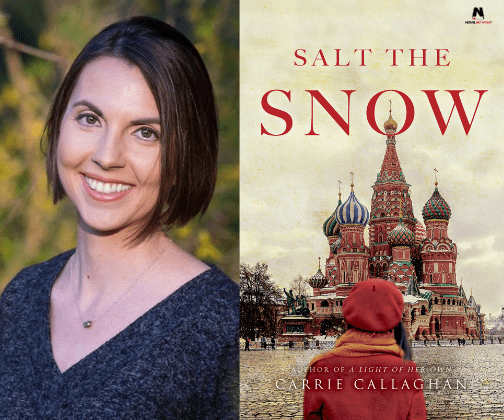 Carrie Callaghan is the author of the historical novels A Light of Her Own (2018) available in paperback 8/4/2020, and Salt the Snow (2020). Her short stories have been published in multiple literary journals around the country, and she is a senior editor with the Washington Independent Review of Books. She lives in Maryland with her family and two ridiculous cats. She loves seasons of all kinds, history, and tea.

For more on Carrie and her writing journey, view this Epilogue Interview.

ABOUT SALT THE SNOW:

From Carrie Callaghan, author of the critically acclaimed A Light of Her Own, comes a story of the trailblazing and liberated Milly Bennett, based on the life of one of the first female war correspondents whose work has been all but lost to history. American journalist Milly Bennett has covered murders in San Francisco, fires in Hawaii, and a civil war in China, but 1930s Moscow presents her greatest challenge yet. When her young Russian husband is suddenly arrested by the secret police, Milly tries to get him released. But his arrest reveals both painful secrets about her marriage and hard truths about the Soviet state she has been working to serve. Disillusioned, and pulled toward the front lines of a captivating new conflict, Milly must find a way to do the right thing for her husband, her conscience, and her heart.

PRAISE FOR SALT THE SNOW:

“The vivid prose of Salt the Snow sets the reader in the middle of socioeconomic upheavals and political unrest with the best possible tour guide, wisecracking American journalist Milly Bennett. Callaghan excels at bringing little-known real-life women out of the darkness of historical obscurity and into the light of recognition. From the first scene, the reader is plunged into a world of suspense and intrigue, led by an unforgettable protagonist. Milly is not so much a character as a fully realized, complex human being: her brilliance and self-sufficiency are admirable, and her loneliness and feelings of unworthiness are heartbreaking. A fascinating novel!” —Clarissa Harwood, author of Impossible Saints and Bear No Malice

“A vivid, well-researched story of a complex and ahead-of-her-time woman, an American journalist, who finds herself—head and heart—while living and working in an equally complex Russia.” —Jenni L. Walsh, author of Becoming Bonnie

“Salt the Snow is a vivid journey through the kaleidoscope of 1930s Europe with an irrepressible and all too human guide in Milly Bennett. Don’t miss this book and its unforgettable heroine!” —Linnea Hartsuyker, author of The Half-Drowned King and The Golden Wolf

“Honest, vivid, and bold in the face of historical truths, Salt the Snow is a captivating story of a woman whose vulnerability and hopeful idealism resonate even today.”  —Jennifer Klepper, bestselling author of Unbroken Threads

ABOUT A LIGHT OF HER OWN:

Judith is a painter, dodging the law and whispers of murder to try to become the first woman admitted to the Haarlem painters guild. Maria is a Catholic in a country where the faith is banned, hoping to absolve her sins by recovering a lost saint’s relic.

Both women’s destinies will be shaped by their ambitions, running counter to the city’s most powerful men, whose own plans spell disaster. A vivid portrait of a remarkable artist, A Light of Her Own is a richly-woven story of grit against the backdrop of Rembrandt and an uncompromising religion.

The trail of Judith Leyster’s career was so faint that only years after her death in 1660, collectors began attributing her few surviving paintings to other artists. She signed her work with only a beautiful, stylized monogram. Credit went to Frans Hals, Jan Miense Molenaer, and others. She would remain lost to history until 1893.

PRAISE FOR A LIGHT OF HER OWN:

“Set in 1633 Holland, Callaghan’s riveting debut convincingly brings to life determined painter Judith Leyster, the first woman to attain master status in the cutthroat profession … Callaghan skillfully balances both the intricacies of the 17th-century Dutch art world and the religious persecution of the time, making this a dextrously woven and engrossing historical novel.” – Publishers Weekly.

“A Light of Her Own, as a portrait of two brave and ambitious Dutch women painters, and a glimpse into 17th century life in Holland, is recommended to all fans of historical fiction.” – NY Journal of Books

“Carrie Callaghan has created a remarkable pair of heroines… A Light of Her Own catches the reader in a web of intrigue, art, and ambition and does not let go until the final page. “ – Washington Independent Review of Books

“A Light of Her Own is a beautifully crafted story set in seventeenth-century Holland, in which two women navigate the law, destiny, and their unstoppable ambition … Riveting.” – Foreword Reviews

Author visits with Carrie Callaghan are available via NovelNetwork.com.