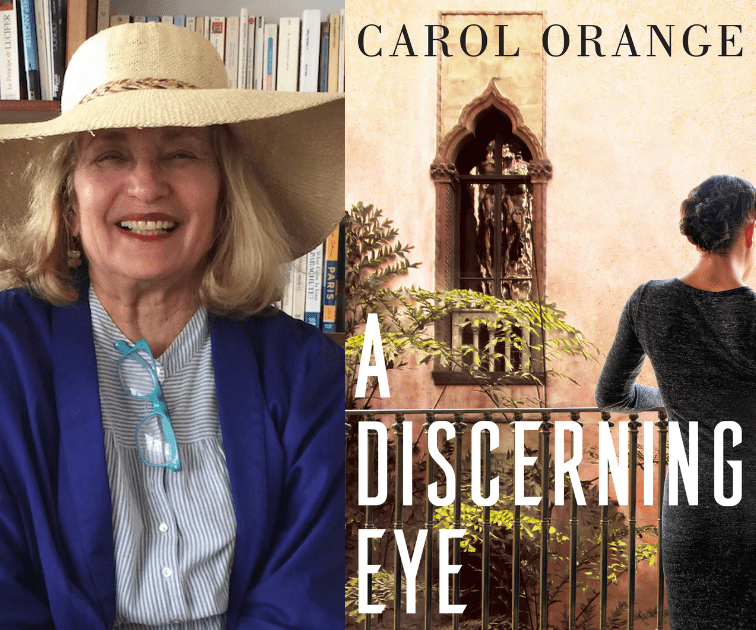 Carol Orange is the author of A DISCERNING EYE. Her work has been published in The Atherton Review, Indelible Ink, and SheKnows among others. Carol has been interviewed and featured on CrimeReads, The Writing Cooperative, Bloom and HokToc. She is a long-term member of the New York Society Library fiction-writing group headed by published author John Buchanan. She holds an MBA from Simmons University.

She has worked as an editor of art books in London and owned an art gallery in Boston. Her Etsy store features many of the artists she represented, as well as vintage posters she collected from all over the world.

Carol also spent two years in Paris, where she researched the life and times of George Sand and developed a series of Sand-Chopin salons with concert pianist Virginia Eskin. She recently moved to Chicago to be near her daughter, son-in-law and granddaughter, and is at work on her next novel about art theft.

ABOUT A DISCERNING EYE:

An art heist sets into motion a high-stakes operation that will involve Interpol, the FBI, the Mafia, drug lords, and a daring female art dealer.

Art dealer Portia Malatesta is devastated when she learns that thirteen works of art were robbed from Boston’s Isabella Stewart Gardner Museum. To help uncover the whereabouts of the artwork, she sets out to construct a psychological profile of the thief. By analyzing the common theme linking the stolen pieces, she suspects the mastermind behind the heist is obsessed with the interplay of dark and light—not only in art, but also in life.

The FBI enlists Portia’s help in a high-stakes sting operation to recover the stolen works of art—a dangerous proposition that will take her to Colombia, where she’ll have to earn the trust of a notorious drug lord’s married daughter. Risking everything, Portia navigates the underworld of Medellín—a complicated web of politics, pride, and ugly crimes—where a single misstep could have deadly consequences.

PRAISE AND RECOGNITION FOR A DISCERNING EYE:

“Through its loving and lovable protagonist, Portia Malatesta, A Discerning Eye takes the reader on a journey that’s both tense and wonderfully escapist. Carol Orange’s rich knowledge of art history and powers of visual description demonstrated throughout elevate the adventure into the realm of John le Carré sophistication.” -Evgenia Peretz, Vanity Fair contributing editor and screenwriter

“Braving Colombian drug lords and the mean streets of Medellín, the intrepid art investigator in A Discerning Eye takes readers on a wild ride in search of the historic art heist of thirteen masterpieces from Boston’s Isabella Stewart Gardner Museum. Carol Orange spins the brazen theft into a fascinating, well-researched thriller in the growing art-crime genre.” -Anne-Marie O’Connor, author of The Lady in Gold: The Extraordinary Tale of Gustav Klimt’s Masterpiece, Portrait of Adele Bloch-Bauer

“Carol Orange’s A Discerning Eye is an intricate tale of art theft, bolstering a sensational plot with finely crafted characters and evocative settings-an enthralling novel not only for suspense seekers and art connoisseurs but everyone who enjoys a fabulous romp.” -Alev Lytle Croutier, author of Seven Houses and Harem: The World Behind the Veil

“A beautiful read. An outstanding plot. An amazing female sleuth. I loved this eventful and absorbing journey through the gilded streets of Boston’s Back Bay to the dangerous Colombian byways of the Medellín drug cartel. The reader follows the art historian and gallery owner Portia Malatesta as she decodes trails left after a tragic art heist leaves a prominent museum denuded of more than a dozen masterworks. Carol Orange tells us that the choice of a Vermeer means more than the cash value of a painting-the human heart is compromised as well.” -Miriam Brody, author of Mary Wollstonecraft: Mother of Women’s Rights

“Take a museum heist of thirteen classic works of art, throw in an outraged and clever art dealer who takes it upon herself to create a profile of the thieves, and mix in an FBI sting, and you get an intelligent, fascinating mystery that leads the reader on a high-stakes, international chase to solve the questions of whodunnit and why. Carol Orange, with her vast knowledge of the art world, has created a story that will keep you on the edge of wherever you happen to be reading A Discerning Eye.” -Charles Salzberg, two-time Shamus-nominated author of Swann’s Last Song and Second Story Man

“Carol Orange’s debut is a whirlwind of a read. An art heist from a Boston museum motivates a clever art dealer to help the FBI recover the stolen masterpieces. With marital tensions, a tempting flirtation, and dangerous encounters with a Colombian drug lord, A Discerning Eye keeps the reader guessing. You’ll be swept up in this fast-paced adventure, while learning about great art along the way.” -Nicole Bokat, author of What Matters Most and The Happiness Thief

Schedule your author visit with Carol Orange via NovelNetwork.