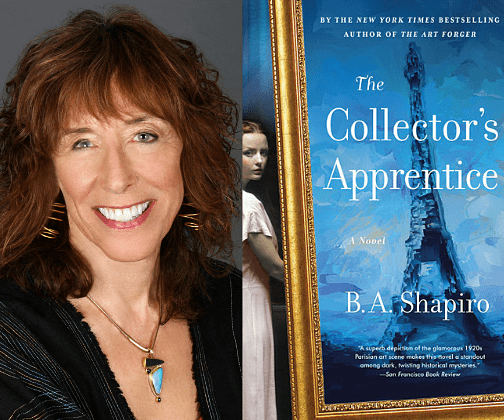 B.A. Shapiro is the award-winning and New York Times bestselling author of nine novels, including Metropolis (May, 2022), The Collector’s Apprentice, The Muralist and The Art Forger, which won the New England Book Award for Fiction, among other honors. Her books have been selected as Community Reads throughout the country and have been translated into over a dozen languages. She holds a PhD in sociology and has directed research projects for a residential substance abuse facility, worked as a systems analyst/statistician, headed the Boston office of a software development firm, and served as an adjunct professor teaching sociology at Tufts University and creative writing at Northeastern University. She likes writing novels the best. Barbara splits her time between Boston and Naples, Florida.

ABOUT THE COLLECTOR’S APPRENTICE:

In this surprising, noirish page-turner, B. A. Shapiro once again takes readers into the world of art, glamour, and mystery. Accused of helping her fiancé steal her family’s fortune and her father’s art collection, Paulien Mertens has fled to France. To protect herself from the law and the wrath of those who lost everything, she has created a new identity. Paulien, aka Vivienne, takes a position working for an American art collector modeled after real-life eccentric museum founder Albert Barnes and quickly becomes caught up in the 1920s Paris of artists and expats, including post-Impressionist painter Henri Matisse and writer Gertrude Stein. From there, she sets out to recover her father’s art collection, prove her innocence, and exact revenge on her ex-fiancé. B. A. Shapiro has made the historical art thriller her own, and once again she gives us an unforgettable tale about what we see—and what we refuse to see.

PRAISE AND RECOGNITION FOR THE COLLECTOR’S APPRENTICE:

“Shapiro delivers a clever and complex tale of art fraud, theft, scandal, murder, and revenge. [Her] portrayal of the 1920s art scene in Paris and Philadelphia is vibrant, and is populated by figures like Alice B. Toklas and Thornton Wilder; readers will be swept away by this thoroughly rewarding novel.”—Publishers Weekly

“B.A. Shapiro is back with a platinum potion of art, love, and scandal, set against the big backdrop of Paris between the wars. If you can put The Collector’s Apprentice down, you’re made of stronger stuff than I am. I read it in one sumptuous sitting. This is a big story, from a big talent.” —Jacquelyn Mitchard, author of The Deep End of the Ocean

“Dazzling and seductive, The Collector’s Apprentice is a tour de force—an exhilarating tale of shifting identities, desire, and intrigue set between 1920s Paris and Philadelphia. Shapiro is a master at melding historical and fictional characters to bring the past alive on the page, and in The Collector’s Apprentice she has forged an exquisite, multilayered story that maps the cogent and singular fire of a young woman’s ambition and the risks she will take for the sake of art.”   —Dawn Tripp, bestselling author of Georgia

“I was engrossed in every twist and turn in this compulsively captivating page-turner, all the way until its astonishing denouement. Shapiro has done it again!”—Thrity Umrigar, bestselling author of The Space Between Us

“Shapiro packs her novel with intrigues and mysteries . . . Readers will . . . be charmed.”—Chapter16.org

“B. A. Shapiro delivers another dose of art history, wrapped tightly in a thriller.”—New York Journal of Books

“Shapiro creates a complex, detailed, and historically-accurate world, and the lack of any straightforwardly heroic characters, along with a superb depiction of the glamorous 1920s Parisian art scene, makes this novel a standout among dark, twisting historical mysteries.”—San Francisco Book Review

Author visits with B.A. Shapiro are coming soon via NovelNetwork.com.