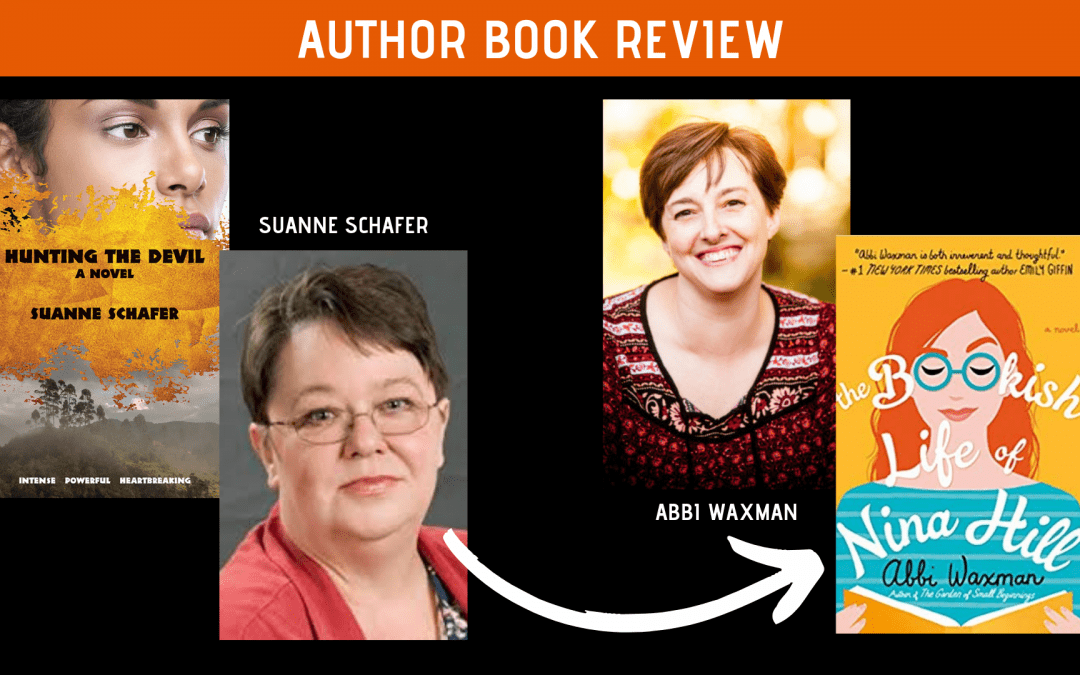 Our authors are avid readers, too! Suanne Schafer, whose newest book, HUNTING THE DEVIL, releases on September 15, 2019, regularly posts book reviews on her website. Here’s what she had to say about fellow NovelNetwork author Abbi Waxman‘s THE BOOKISH LIFE OF NINA HILL:

I was intrigued by the book cover and the blurb about The Bookish Life of Nina Hill released by Berkley on July 9, 2019. Nina is an introvert who suffers from situational anxiety. To compensate, she tends to stick to a well-documented routine. She has good friends and is active in the “real” world with book clubs and her trivia team but prefers being on her own in a life she considers complete. Her attempts at romance have failed in the past, and she’s not currently looking for a partner. An only child of a single mother (a globe-trotting photojournalist), Nina never knew her father. At this point, a lawyer appears, telling her she’s mentioned in her father’s will. Suddenly Nina is part of a large, multi-generational family. Then, a cute member of another trivia team asks her out. Nina is forced to come out of her cocoon.

This book is written in a wryly funny voice and filled with literary references, nerdy random bits of information regarding books, TV, movies, and other aspects popular culture. Nina is fully relatable as a character. Though there is a romance between Tom (the trivia guy) and Nina, it’s not the focus of the story, so if you want a “pure” romance, this isn’t the book for you. If you like alpha males, this really isn’t the romance for you as Tom is a sweet, nerdy beta male. I’d call The Bookish Life of Nina Hill chick-lit or women’s fiction light with elements of romance. It was a fun read with tons of lines that were so good I highlighted them on my Kindle:

Nina had a lot of sympathy for Bruce Banner, particularly the version played by Mark Ruffalo, and at least she had Xanax. He only had Thor.

Being surrounded by books was the closest she’d ever gotten to feeling like the member of a gang. The books had her back, and the nonfiction, at least, was ready to fight if necessary.

Both Abbi Waxman and Suanne Schafer are available to visit with book clubs via NovelNetwork.com.