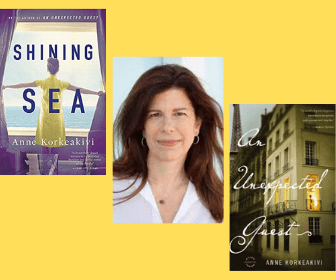 Anne Korkeakivi is the author of the novels Shining Sea and An Unexpected Guest, both from Little, Brown. Her short fiction and nonfiction have been published by the Atlantic, TIME, the New York Times, the Wall Street Journal, the Times (UK), Travel & Leisure, Ms., Architectural Digest, the Village Voice, the Yale Review, the Bellevue Literary Review, The Millions, Literary Hub, and many other periodicals in the US, the UK, and online. Her op-ed for USA Today on being a writer, being an expat, and universal healthcare was shared tens of thousands of times, and an essay about traveling in Tanzania with her family was chosen for Best Women’s Travel Writing, Vol. 10. She is a recipient of the Lois Kahn Wallace Writers Award and residency fellowships from Yaddo and Hawthornden.

Anne holds a BA in Classics from Bowdoin College and an MA in English and Comparative Literature from Columbia University. A multi-generational New Yorker, she was born and raised in Manhattan, with many days and nights in western Massachusetts, and subsequently has lived also in Helsinki, Finland; Los Angeles; Washington, DC; Cambridge, MA; Maine; Brooklyn; Paris; and Strasbourg in eastern France, from where she worked for the French publisher Flammarion and traveled frequently to Paris. She currently splits her time between New York City and Geneva, Switzerland, where her husband is a human-rights lawyer with the UN. They have two daughters.

You can read an author q and a with Anne here.

A crowd of sparrows flies up, peppering the California sky overhead. His heart constricts, and Michael Gannon thinks: Today is the day I am going to die.

Opening in 1962 with the fatal heart attack of forty-three-year-old Michael Gannon, a WWII veteran and former POW in the Pacific, SHINING SEA plunges into the turbulent lives of his widow and kids over subsequent decades, crisscrossing from the beaches of southern California to the Woodstock rock festival in its heyday, London’s gritty nightlife in the eighties to Scotland’s remote Inner Hebrides islands, the dry heat of Arizona desert to the fertile farmland of Massachusetts.

Beautifully rendered and profoundly moving, SHINING SEA by Anne Korkeakivi is at heart a family story, about the ripple effects of war, the passing down of memory, the making of myth, and the power of the ideal of heroism to lead us astray but also to keep us afloat.

ABOUT AN UNEXPECTED GUEST:

On a lovely spring day in Paris–post-9/11 and several months after the London Underground bombings–Clare Moorhouse, the Irish-American wife of a high-ranking British diplomat, is arranging an official dinner crucial to her husband’s career. As she shops for fresh stalks of asparagus and works out the menu and seating arrangements, her day is complicated by the abrupt arrival of her son from boarding school in England and a disquieting encounter with a  man on the street. More unnerving still is a recurring face in the crowd, one that belonged to another, darker era of her life, long buried.

Like Virginia Woolf did in Mrs. Dalloway, Anne Korkeakivi brilliantly weaves the complexities of an age into an act as deceptively simple as hosting a dinner party.